source link: https://www.neowin.net/news/entire-arc-alchemist-gpu-lineup-has-leaked-thanks-to-intel039s-own-driver/
Go to the source link to view the article. You can view the picture content, updated content and better typesetting reading experience. If the link is broken, please click the button below to view the snapshot at that time. 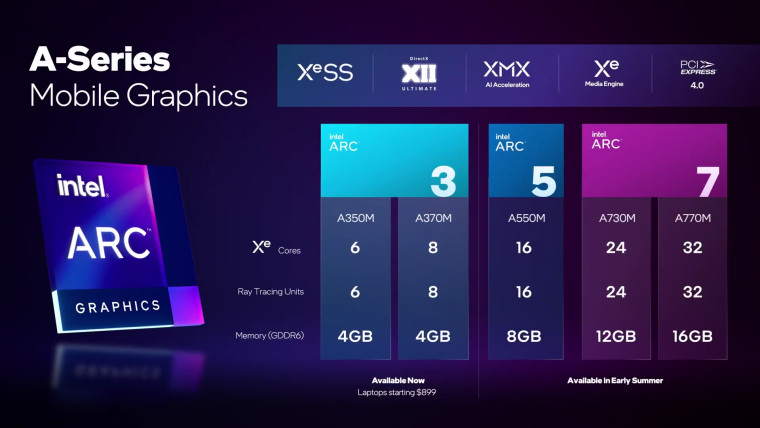 At the end of March earlier this year, Intel took the wraps of its highly anticipated Arc discrete graphics cards. Initially, mobile GPUs will be arriving (image above), followed by desktop parts later in the year. But perhaps to the disappointment of many people worldwide who were looking forward to Intel's discrete GPUs, the firm has confirmed that it its only certain Asian markets where the mobile and desktop Alchemist (First gen Arc codename) SKUs will be available, and only via OEMs and system integrators.

Still if you are looking forward to getting an Arc desktop GPU later in the year when its finally available, you can already plan ahead from today into which SKU you would prefer buying. That's because the entire Arc Alchemist A-series lineup has leaked courtesy of the latest Intel beta driver.

As you can see in the image below, a list of unreleased Arc models have been listed by Intel, alongside the couple of already available models. 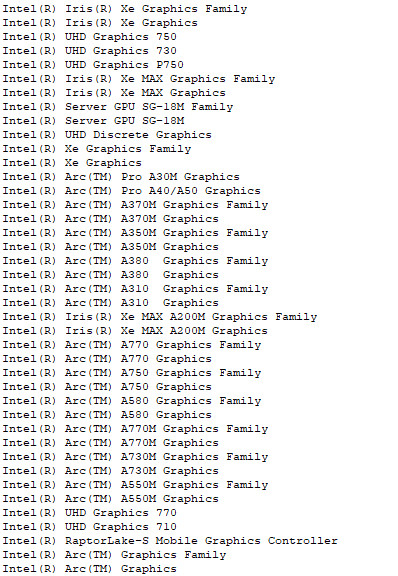 Intel Arc, like its Core series CPUs, will be available in three flavors. The entry-level parts will comprise the Arc 3 (A3) lineup. And similarly, the higher SKUs will be under Arc 5 (A5) and Arc 7 (A7).

This isn't the first time Intel's drivers have provided insight into future unannounced products. Information on alleged future Intel Arc Elasti architecture also leaked out via a driver too. Elasti might be the successor to Intel's fourth-gen Arc design, codenamed Druid.