source link: https://www.allaboutcircuits.com/news/more-iot-more-emi-designers-navigate-crowded-em-spectrum/
Go to the source link to view the article. You can view the picture content, updated content and better typesetting reading experience. If the link is broken, please click the button below to view the snapshot at that time.

4 hours ago by Adrian Gibbons

With billions of IoT devices worldwide, designers are increasingly brushing up against electromagnetic interference. What's the scope of this issue today?

According to Oracle, IoT devices will reach 22 billion by 2025. These devices are diverse, too, with applications ranging from consumer wearables to wireless sensors in factories.

From a design perspective, one of the prevailing concerns with IoT devices is spectrum noise. As such, electronic systems worldwide are managed for interoperability by government regulations with rigorous electromagnetic compliance (EMC) testing.

The basic goal of EMC is to ensure that devices placed in proximity to one another do not interfere with the normal operation of a second device, known colloquially in the EMC world as the “victim circuit." When a second device is victim to an aggressor device, it is said to suffer from electromagnetic interference (EMI) at a certain level of susceptibility. 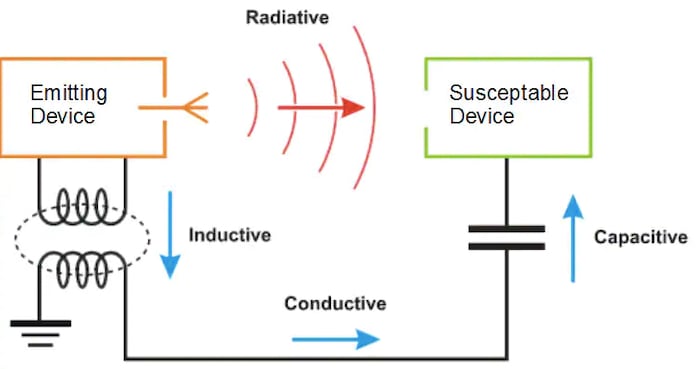 Multiple potential coupling paths exist between the emitting device and the susceptible device, and designers must be aware of what mechanisms their devices might be subject to in the field. Image used courtesy of Mouser

EMC standards like FCC Part 15B, CISPR-32, and the RSS-GEN are nominally maintained by the governments of the United States, European Union, and Canada, respectively.

The mass proliferation of IoT devices in a given space has increased crowding of the electromagnetic spectrum, which can cause issues for designers striving for devices to "play nice." 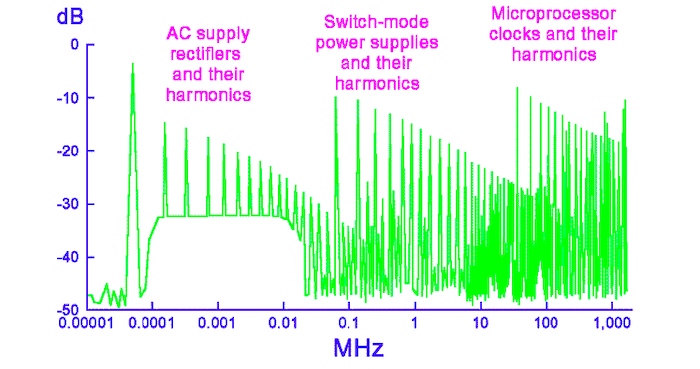 The EM spectrum is already a crowded place with currently deployed systems, and the prolific use of IoT devices will further increase the average spectral density in a given area. Image used courtesy of Mouser

Further complicating this issue, EMC standards are broken into multiple classifications, including conducted and radiated, intentional and unintentional radiators. Nominally, this division separates the world of information technology and radio electronics.

Another EMC consideration designers must consider with IoT devices reaches to the very nature of a mixed-signal (analog and digital) device. IoT technologies are used for capturing data from sensors, digitally controlling machinery, and providing communication interlinks (often via radio links).

An engineer designing an IoT system must successfully pass EMC/EMI tests from both sets of standards, adding to the design complexity and cost of the hardware.

EMC in North American vs. Europe

A final struggle for IoT designers faced with EMC issues is the lack of standardization between the two largest markets for electronic sales: North America and the European Union (EU). For the most part, these two markets agree on rules for limits to a device radiating into its environment.

However, the commercial North American market has virtually no standards governing the susceptibility of devices (the degree to which they are affected by coupled energy), leading to a disconnect between the more rigorous requirements of the EU. Should a product be intended for both markets, additional testing is required.

Anything that radiates is an antenna whether by design or by accident, and antennas are bound by the law of reciprocity. A device with low levels of emissions in a particular band of the radio frequency spectrum is also unlikely to be affected by energy coupled in from the external world.

How Do Designers Ensure Electromagnetic Compatibility?

There are several strategies to address EMC concerns, which AAC contributor Ignacio de Mendizábal addresses in more detail in his series on EMC testing. Below are a few ways IoT designers and manufacturers are side-stepping EMC issues throughout the design process, but by no means is this a comprehensive list of techniques and methods.

Eliminate Gaps in the Return Plane

Many designers tackle electromagnetic compatibility by considering PCB board stack-up, ensuring no gaps in the return plane, and avoiding poor power delivery networks (PDN), according to Kenneth Wyatt, President and Principal Consultant of Wyatt Technical Services.

Gaps in the return plane of a signal increase emissions at the point of the gap as Mr. Wyatt shows in a small demonstration video from 2017. EMC can be achieved when designers consider EMC compliance early in the design phases.

An additional source of radiation comes from highly-repetitive waveforms, namely clock sources, in electronic systems. An effective way to reduce the emissions from clocks is to spread the clock by modulating it with a secondary signal. 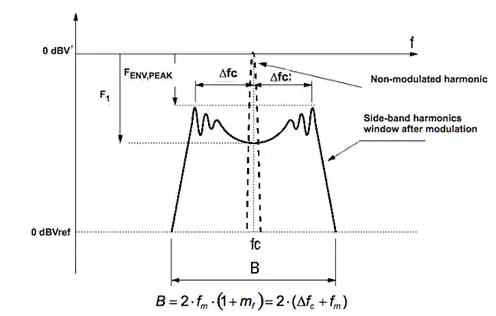 Total peak reduction (dBV) is possible by modulating the clock with a second waveform, including sine, triangular, and pseudo-random modulations. Image used courtesy of Digi-Key

While this technique reduces peak emissions as a result of the clock, it can increase the complexity in the clock circuitry.

Another method is to simply pick noise-immune devices at the outset of a project. Manufacturers know that system noise is a major problem with analog sensor technology. Solutions like ROHM Semiconductor's recently-released EMARMOUR series of op-amps are said to have superior noise immunity, eliminating the need for filtering and leading to reduced BOM cost.

The rollout of IoT devices is not slowing down any time soon, which makes compliant designs that play nice more important than ever. Whether operating in smart cities, advancing industry 4.0, or automatically ordering coffee when your bean hopper gets low, IoT devices need to process data accurately even in the presence of external interference.

Do you work with IoT innovations? Are there any outside-the-box ways you've guarded against EMI in your designs? Share your insights in the comments below.