source link: https://www.slashgear.com/937151/we-tried-mercedes-self-driving-electric-car-that-you-can-buy-today/
Go to the source link to view the article. You can view the picture content, updated content and better typesetting reading experience. If the link is broken, please click the button below to view the snapshot at that time. 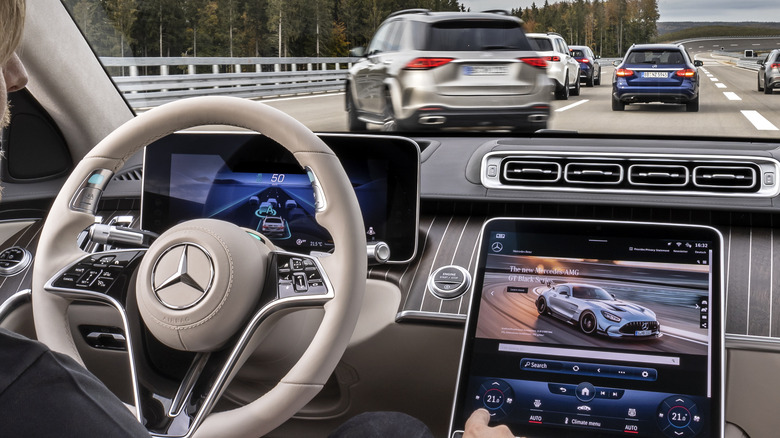 There is something exceptionally unnerving about taking your hands off the wheel and ignoring the traffic around your six-figure Mercedes-Benz EQS, but with DRIVE PILOT the German automaker is expecting it to become the new normal. Promising a stepping-stone to full autonomy for its most wealthy owners, the Level 3 self-driving system isn't the "door-to-door" robotaxi so many companies have promised — and then conspicuously struggled to deliver — but Mercedes' latest play to add ease to the lives of S-Class and EQS owners.

At the moment, in the US, no car available to purchase offers anything above Level 2 (even Tesla's much-discussed self-driving pilot beta is still considered Level 2, as the automaker says drivers need to be ready to take over at all times). According to the Society of Automotive Engineers (SAE), there are six stages of autonomous driving: Level 2 systems are assistance, effectively, but still require human supervision at all times. Level 3 is where things start to get really interesting because then there are times when the autonomous features are fully in control, and the human at the wheel is not themselves driving. 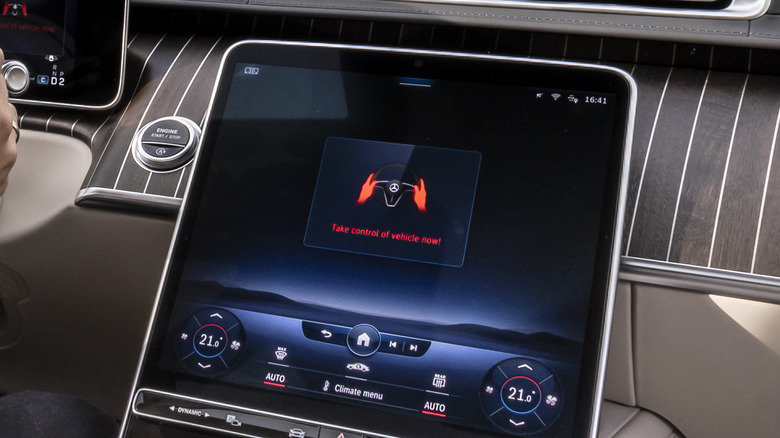 Level 3's big footnote — or, in reality, its big flashing red warning — is that, when the system demands it, the human driver has to take over. To qualify for Level 4 or 5, in contrast, the system is entirely self-reliant in whatever conditions it's designed to work. For Mercedes, then, DRIVE PILOT presents an opportunity and a challenge: Germany changed its rules earlier this year to allow Level 3 cars to operate on public roads, yes, but the fiendishly complex technology, legal environment, and inherent nature of humans themselves is a whole lot to manage.

At the wheel of a Mercedes EQS all-electric sedan, though, it was oddly straightforward to forget all that and simply enjoy the ride.

The rules behind the big glowing button

Despite the complexity in the background, it's easy to use; not least because Mercedes actually withholds most of the settings we're familiar with from adaptive cruise control. There are two, big buttons integrated into the steering wheel: press one, when DRIVE PILOT functionality is shown as available through graphics on the driver's display, and lights above them glow blue. You get a message on the screen telling you that you can release the wheel and take your feet off the pedals.

There's no control over speed, and the system only works at up to 60 kph or around 37 mph. That, notably, is the minimum speed that Germany requires for vehicles using the Autobahn, and the maximum the German government's latest rules allow for Level 3 systems that can't navigate between lanes and pull over by themselves at the side of the road or similar. DRIVE PILOT requires a vehicle in the lane ahead to follow, but you can't manually adjust the minimum distance between your car and that one.

It'll only work during daylight hours, and will automatically disable during inclement weather. Water sensors in the wheel arches track how slippery the road is, and if spray is likely to obscure any of the sensors. Plus, it'll only work on the divided highways that Mercedes has mapped ahead of time, with a high-resolution GPS sensor — apparently accurate down to 1 cm, or less than half an inch — used to ensure the vehicle is in a DRIVE PILOT capable zone. Currently, that's about 8,700 miles of highway; outside of that, it simply won't turn on.

The hands are the key 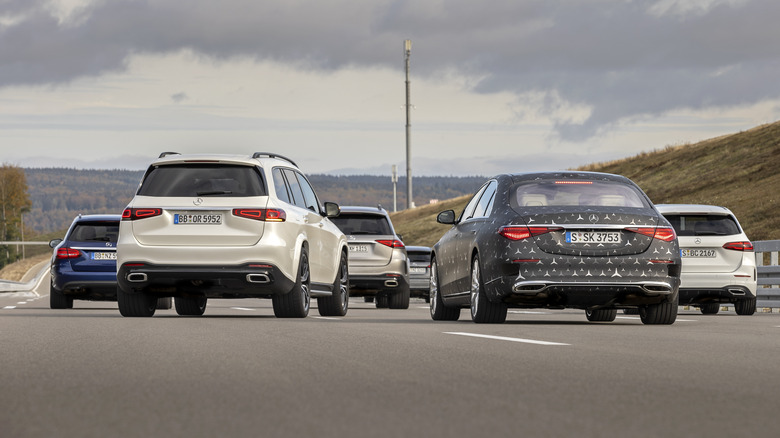 For that reason, and the hands-off component, it's easy to compare DRIVE PILOT to something like GM's Super Cruise or Ford's BlueCruise. After all, both of those systems are limited to stretches of pre-mapped highways, allow you to take your hands off the steering wheel, and use driver-monitoring cameras.

The reality, however, is that Mercedes' system is markedly different. GM and Ford are both upfront about the fact that their assistance tech is Level 2 on the autonomous driving scale, and thus the person behind the wheel is still responsible at all times, even if they're not touching that wheel. Look away for more than a few seconds, and you'll get increasingly angry reminders that you should be monitoring the road ahead.

In return for that involvement, they also work at much higher speeds: cruising speeds, in fact, as the names of each system suggest. The key is who is in charge of the car while the technology is active, that's what really defines which autonomous level they achieve.

Setting a barrier between Level 2 and 3 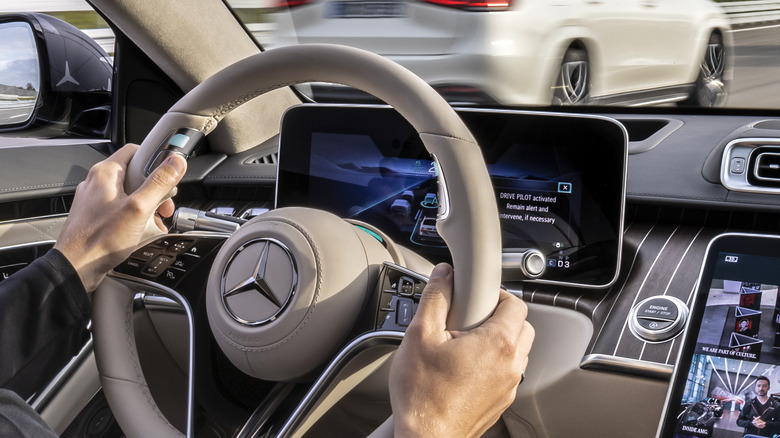 Mercedes has been particularly cautious, therefore, about making clear just who is responsible. Vehicles equipped with DRIVE PILOT also offer the existing adaptive cruise control and lane-keeping assistance we've seen on other recent Mercedes models. A Level 2 system that demands the driver's continuous attention, it uses sensors in the steering wheel to track whether you're ready to take over the controls.

You can't go, however, from Level 3 to Level 2 directly. Mercedes intentionally designed it so that you switch from DRIVE PILOT to manual operation first, and only then can you enable the Level 2 system. You can, however, go from Level 2 direct to Level 3; that's because, as the automaker points out, you're getting safer rather than the opposite way around.

It's weird, but it's the good weird 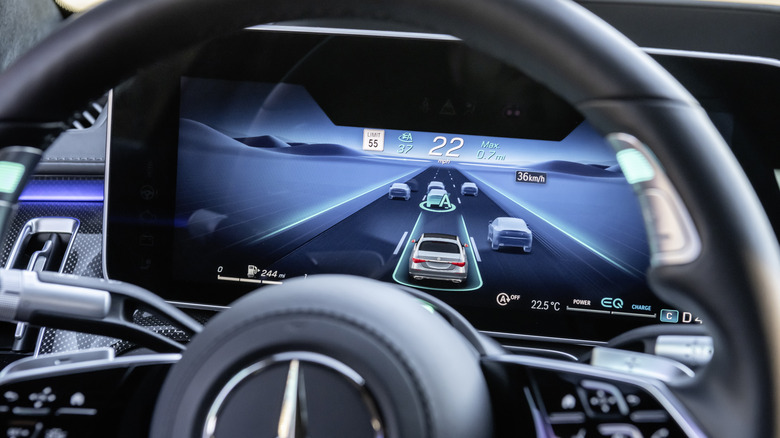 Like the best autonomous vehicle demos I've been in before, DRIVE PILOT starts out disconcerting and then rapidly becomes something you take for granted. It took a couple of minutes before I was comfortably chatting with my Mercedes engineer co-pilot, who helpfully loaded up a game of Tetris on the EQS' sizable center touchscreen.

Glancing up to check its progress, though, I had a choice of the main driver display — on which the currently-tracked vehicle and those identified in front, to the side, and behind us were flagged — and the 3D head-up display. That overlays an amorphous blob on the identified road ahead, along with hovering graphics to show just what the Level 3 driver is aware of.

Happily, the car was better at navigating traffic than I am at controlling falling blocks. While DRIVE PILOT has been available on production cars in Germany since mid-May, Mercedes opted to run the demo on its track at the Immendingen Test Center near Stuttgart. That allowed it to simulate a number of events — including emergency vehicles dashing past, closed lanes, and rapid stops — that you'd probably prefer not to encounter in the real world.

It's beguilingly natural in how it drives, akin perhaps to a reassuringly proficient human chauffeur. DRIVE PILOT won't change lanes for you, but it can weave within the lane as long as it doesn't cross the markings; that way, if a car is partly across the lines, your Mercedes can potentially still creep around it. In an emergency situation, it'll not only stop but pull to the side of the lane to help leave space for fire trucks or ambulances to pass.

Mercedes relies on a whole host of sensors for all this, some of which are already standard on the latest S-Class and EQS sedans. The corner radar, cameras, and ultrasonics are carried over, joined with a front-facing LIDAR, more cameras, and even microphones. DRIVE PILOT uses the latter to listen out for emergency vehicles and then compares all the real-time data it's getting with a special high-definition map. 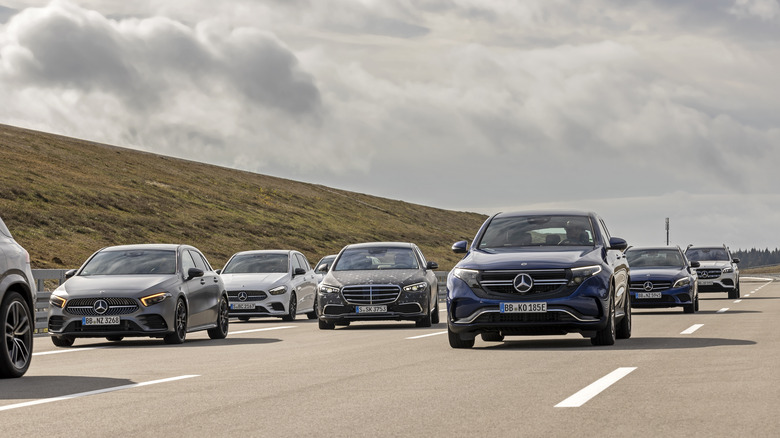 Spend any time with Mercedes DRIVE PILOT, and you'll inevitably come away with two big questions. The first is when the system might be expanded to encompass greater speeds since — though useful in highway congestion — it's not available at standard Autobahn pace. The idea of wishing for traffic on your commute, just so the car can operate itself, feels perverse, but I could well imagine owners of so-equipped vehicles feeling that way.

Mercedes won't be drawn on when that will happen, and neither will it say when we might see DRIVE PILOT offered in the US. Its caution is, frankly, wise as well as frustrating. Level 3 autonomous driving raises all manner of liability questions, not least around the expectation that at some point the driver is inevitably going to need to retake control.

You might play a game or watch a video on the center touchscreen, then, or check your email on your phone, but forget to take a nap. Indeed, DRIVE PILOT will deactivate if you try to adjust the seating position while it's operational. Even as the system spreads to other locations, Mercedes warns that just what you'll be legally allowed to do will vary according to local regulations.

Still in the loop, but looking ahead 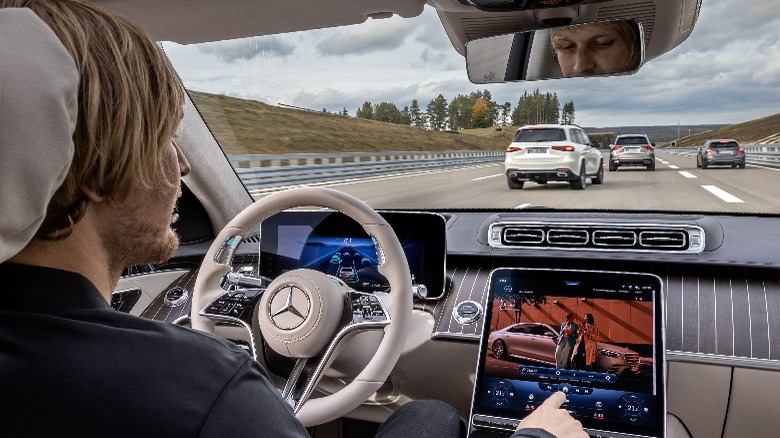 Level 3 autonomous driving is, for those reasons and more, a controversial thing. A patchwork of evolving rules, the unpredictable nature of high-speed driving, and — by no means least — the unreliability of human operators have led some to predict the safest route would be to skip this halfway-measure of self-driving cars, and go straight to Level 4. That way, humans could be confident that they're fully out of the loop.

From behind — but not touching — the wheel, though, it's hard to not be charmed by what Mercedes-Benz has achieved here. I'm still not entirely sure DRIVE PILOT would be completely compatible with American highways, not least because its fairly cautious road manners leave sizable gaps of the sort my speed-hungry fellow US drivers would be quick to take advantage of.

Maybe, though, my frustration of seeing lane-cutters in action would be tempered by the car having to deal with them, rather than myself. If I know I'm facing rush-hour traffic, but that I can browse my phone or watch Netflix while I'm stuck, perhaps I'd be happier leaving the house a little earlier. Rather than leaving it until the last minute and spending however many miles furiously gripping the wheel and cursing my fellow commuters.

That is, arguably, the most exciting aspect of the dawning age of autonomous driving: a change in how we view our time within cars, from sole operator to occasional participant. Mercedes' DRIVE PILOT is a tentative first step toward that future, but having experienced it hands-off and firsthand, I already want more.