Does the Nothing phone (1) support fast charging?

source link: https://www.androidcentral.com/phones/does-nothing-phone-1-support-fast-charging
Go to the source link to view the article. You can view the picture content, updated content and better typesetting reading experience. If the link is broken, please click the button below to view the snapshot at that time. 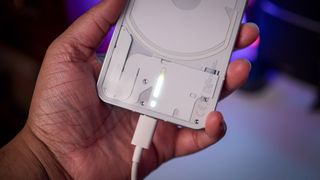 Does the Nothing phone (1) support fast charging?

Best answer: Yes, the Nothing phone (1) does support 33W PD3.0 USB-C fast charging, albeit through wired means only.

Charging your Nothing phone (1) back up

The Nothing phone (1) sports a decent 4,500mAh battery that's enough to deliver more than a day's worth of average uptime. As our very own Harish Jonnalagadda found during his hands-on testing, the device doesn't die before the end of the night, even if you're a power user.

While this is an absolutely necessary feature in a stellar Android phone, topping your phone (1) back up is equally important. Thankfully, Carl Pei's brainchild doesn't disappoint in that area either.

The Nothing phone (1) goes from flat dead to half-full in half an hour via 33W PD3.0 wired charging. Of course, you need to have a compatible USB-C charger at hand, which you will have to buy separately, as Nothing doesn't include one in the box.

Thankfully, at least you still get a USB-C cable in the package. If you're planning on getting the Nothing device, or already have one, be sure to grab a compatible charger for the phone (1) that has the USB PD 3.0 protocol and delivers at least 33W speeds or more.

You won't find a 33W brick in the market, so the sensible thing to do is to purchase a 45W or 65W charger with plenty of ports. Get something that's multifunctional and future-proof, because these chargers can be pricey.

Considering that this is a budget phone with innovative features like the phone (1)'s glyph lights, the lack of a charger is acceptable. What more than makes up for this flaw is the Nothing phone (1)'s wireless charging capabilities. There aren't very many Android phones that support wireless charging, so the fact that Nothing's budget buster sports 15W wireless, and 5W reverse wireless charging, is amazing.

No charger, no problem. TECKNET is here to give you what Nothing won't: a compact, affordable, 65W USB-C GaN charger with PD 3.0, three ports, and foldable prongs.

Namerah Saud Fatmi is a freelance writer for Android Central. She has a passion for all things tech & gaming and has been an honorary Goodreads librarian since 2011. When she isn't writing, she can be found chasing stray cats and dogs in the streets of Dhaka or slaying dragons in the land of Skyrim. You can reach her on Twitter @NamerahS.