source link: https://arstechnica.com/tech-policy/2022/07/one-america-news-loses-verizon-tv-deal-begs-for-access-to-comcast-or-charter/
Go to the source link to view the article. You can view the picture content, updated content and better typesetting reading experience. If the link is broken, please click the button below to view the snapshot at that time.

Right-wing network was already in dire straits after getting booted from DirecTV. 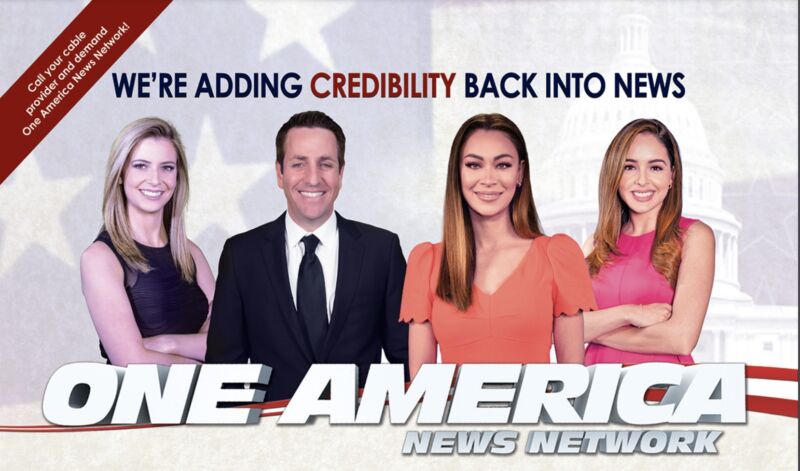 One America News Network is about to lose its last major TV distributor. After being removed from DirecTV in early April, the right-wing network was still aired on Verizon Fios. But with a channel-carriage contract expiring at the end of July, Verizon confirmed that the sides won't reach a deal.

"Our negotiation with OAN has been a typical, business-as-usual carriage negotiation like those that routinely happen between content distributors and content providers. These negotiations were focused on economics, as they always are, but OAN failed to agree to fair terms," Verizon said in a statement provided to Ars last night. "Since we were unable to reach an agreement, effective July 31, 2022, we will no longer have the rights to provide our customers with this programming, and it will be removed from the Fios TV lineup."

Verizon also confirmed the July 31 removal in an update posted to its website, which notes that "sometimes broadcasters and cable networks demand unacceptable price increases" that can increase customers' monthly TV bills. We contacted OAN about its removal from Verizon last night and will update this article if we get a response.

OAN's removal from major TV providers came after pressure from advocacy groups that pointed out that OAN "is a major supporter of the Stop the Steal movement" and that it spread "election fraud lies that claimed the 2020 election was stolen from Donald Trump," "stok[ed] violent calls for the attack on the US Capitol," and airs "wall-to-wall COVID-19 disinformation." US Reps. Anna Eshoo (D-Calif.) and Jerry McNerney (D-Calif.) last year questioned AT&T, Verizon, and other TV providers about why they carry OAN, Newsmax, and Fox News.

"We are concerned about the role Verizon plays in disseminating misinformation to millions of its Fios TV subscribers," an Eshoo/McNerney letter to Verizon said.

OAN has gotten increasingly desperate in its attempts to stay on major TV providers. OAN owner Herring Networks sued DirecTV and its majority owner AT&T in March, saying it might have to shut down because of the lost revenue from DirecTV's decision to drop the network.

OAN has also been urging Comcast and Charter Spectrum customers to demand that the nation's two largest cable companies air the channel. "OAN has tried for years to get on Comcast and Charter Spectrum TV. You are stuck paying for LIBERAL main stream media news. Yet OAN asks for less than 1/5th of the rate of MSNBC," reads a message that we viewed on OAN's website yesterday: 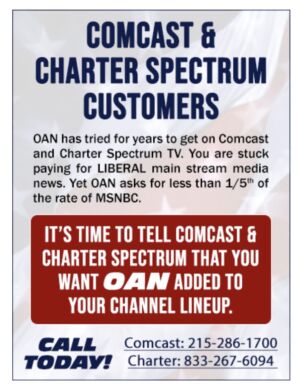 Providing phone numbers to call the cable companies, the message says, "It's time to tell Comcast & Charter Spectrum that you want OAN added to your channel lineup. Call today!"