source link: https://sparktoro.com/blog/sparktoro-followerwonk-joint-twitter-analysis-19-42-of-active-accounts-are-fake-or-spam/
Go to the source link to view the article. You can view the picture content, updated content and better typesetting reading experience. If the link is broken, please click the button below to view the snapshot at that time.

TL;DR – From May 13-15, 2022, SparkToro and Followerwonk conducted a rigorous, joint analysis of 44,058 public Twitter accounts active in the last 90 days. These accounts were randomly selected, by machine, from a set of 130+ million public, active profiles. Our analysis found that 19.42%, nearly four times Twitter’s Q4 2021 estimate, fit a conservative definition of fake or spam accounts (i.e. our analysis likely undercounts). Details and methodology are provided in the full report below.

For the past three years, SparkToro has operated a free tool for Twitter profiles called Fake Followers. Over the last month, numerous media outlets and other curious parties have used the tool to analyze would-be-Twitter-buyer, Elon Musk’s, followers. On Friday, Mr. Musk tweeted that his acquisition of Twitter was “on hold” due to questions about what percent of Twitter’s users are spam or fake accounts.

SparkToro is a tiny team of just three, and Fake Followers is intended for informal, free research (our actual business is audience research software). However, in light of significant public interest, we joined forces with Twitter research tool, Followerwonk (whose owner, Marc Mims, is a longtime friend) to conduct a rigorous analysis answering:

We address each of these questions below.

Our definition (which may differ from Twitter’s own) can best be described as follows:

“Spam or Fake Twitter accounts are those that do not regularly have a human being personally composing the content of their tweets, consuming the activity on their timeline, or engaging in the Twitter ecosystem.”

Many “fake” accounts under this definition are neither nefarious nor problematic. For example, quite a few users find value in following a bot like @newsycombinator (which automatically shares frontpage posts from the Hacker News website) or @_restaurant_bot (which tweets photos and links from random restaurants discovered through Google Maps). These accounts, arguably, make Twitter a better place. They just don’t have a human being behind a device, personally engaging with the Twitter ecosystem.

By contrast, most “spam” accounts are an unwanted nuisance. Their activities range from peddling propaganda and disinformation to those attempting to sell products, induce website clicks, push phishing attempts or malware, manipulate stocks or cryptocurrencies, and (perhaps worst) harass or intimidate users of the platform.

SparkToro’s Fake Followers methodology (described in detail below) attempts to identify all of these types of inauthentic users.

Our systems do not, however, attempt to identify Twitter accounts that may be irregularly operated by a human but have some automated behaviors (e.g. a company account with multiple users, like our own @SparkToro, or a community account run by a single person, like Aleyda Solis’ @CrawlingMondays). We cannot know how Twitter (or Mr. Musk) might choose to classify these accounts, but we bias to a relatively conservative interpretation of “Spam/Fake.”

What Percent of Active Twitter Accounts are Spam or Fake?

To get the most comprehensive possible answer, we applied a single spam/fake account analysis process (described below) across five unique datasets. These are visualized in the graph below (the same one that appears at the top of this post).

The datasets represented above are:

Undoubtedly, other estimates will be made by other researchers, hopefully with equally large and rigorous datasets. Given the limitations of publicly available data from Twitter, we believe the most accurate estimate to be: 19.42% of public accounts that sent a tweet in the past 90 days are fake or spam.

What Percent of Elon Musk’s Twitter Followers are Spam, Fake, or Inactive?

When running a Fake Followers report through our public tool, we analyze a sample (several thousand) of a Twitter user’s followers. When an account has a very large number of followers, this methodology can deviate from what a full analysis of every follower shows. Over Saturday, May 14th and Sunday, May 15th, SparkToro’s Casey Henry spun up this comprehensive analysis for Mr. Musk’s account, to provide the most precise number possible. 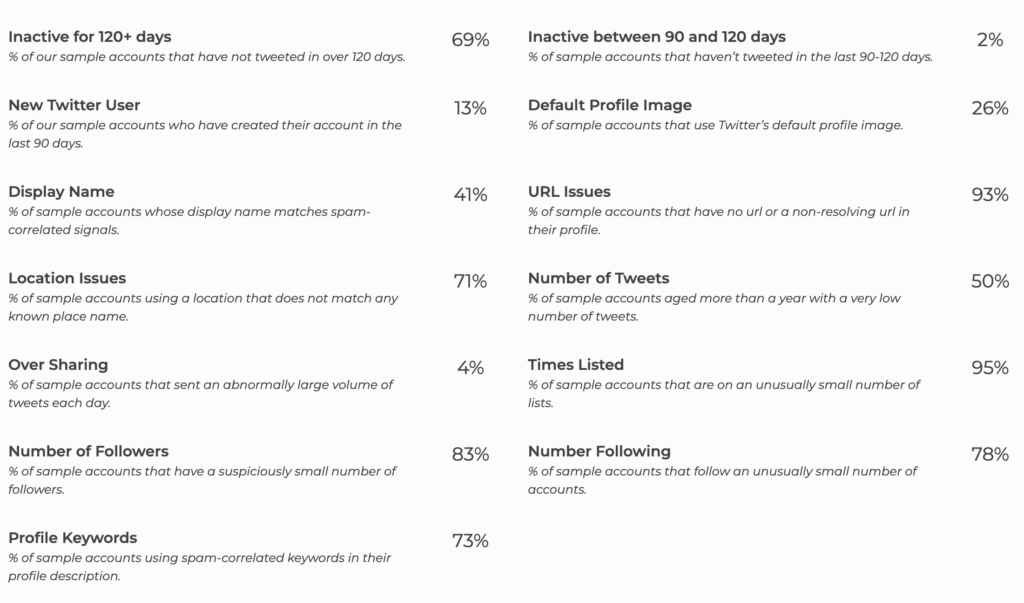 The breakdown of some factors used in our spam analysis system is above, and in total, 70.23% of @ElonMusk followers are unlikely to be authentic, active users who see his tweets. This is well above the median for fake followers, but is unsurprising (to us, at least) for several reasons:

When compared to the distributions of other Twitter accounts, @ElonMusk’s fake/spam follower count may seem out of the ordinary, but we do not believe or suggest that Mr. Musk is directly responsible for acquiring these suspicious followers. The most likely explanation is a combination of the factors above, exacerbated by Mr. Musk’s active use of Twitter, the media coverage of his tweets, and Twitter’s own recommendation systems.

We also conducted an analysis of only those 26.8M @ElonMusk followers who’ve tweeted in the last 90 days. This filter matches the one we applied to the Followerwonk dataset and the random followers of @Twitter.

This more selective analysis found 23.42% to be likely fake or spam, a number not far off the estimated, global average.

Why Should SparkToro & Followerwonk’s Methodology Be Trusted?

The datasets analyzed above (save for the random 100 followers of @Twitter, a methodology we don’t endorse) are large enough in scope and rigorous enough in process that their results are reproduceable by any Twitter researcher with similar public access. We invite anyone interested to replicate the process we’ve used here (and describe in more detail below) on their own datasets. Twitter provides information on their API offerings here.

Followerwonk selected a random sample from only those accounts that had public tweets published to their profile in the last 90 days, a clear indication of “activity.” Further, Followerwonk regularly updates its profile database (every 30 days) to remove any protected or deleted accounts. We believe this sample is both large enough in size to be statistically significant, and curated to most closely resemble what Twitter might consider a monetizable Daily Active User (mDAU).

Above: some of the 17 signals SparkToro’s system uses to identify fake or spam accounts.

Our model for identifying fake accounts comes from a machine learning process run over many tens of thousands of known spam (and real) Twitter accounts. Here’s how we built that model:

In July of 2018, we bought 35,000 fake Twitter followers from 3 different vendors of spam and bot accounts. Our vendors had those accounts follow an empty Twitter account, created in 2016, that had 0 followers in July 2018. It took ~3 weeks to deliver the 35,000 followers. Every day for the next 3 weeks, we collected data on these fake/spam accounts.

In addition to those 35,000 known spam accounts, we took another random sample of 50,000 non-spam accounts from a SparkToro’s large index of profiles. This gave us a total of 85,000 accounts to run through a machine learning process on Amazon Web Services.

Those 85,000 accounts were split into two groups with a mix of SPAM and non-SPAM accounts. Group A as the training set, and Group B as the testing set to analyze performance of the models.

The following data was used for the initial model generation:

These, however, are not alone, and other signals that have decent correlation with spam (especially when multiple signals apply to a single account) were also useful to build a functioning model. Through trial and error (and, of course, pattern-fitting) we crafted a scoring system that could correctly identify over 65% of the spam accounts. We intentionally biased to missing some fake/spam accounts rather than accidentally marking any real accounts incorrectly.

It’s crucial to keep in mind that no one factor tells us that an account is spam! The more spam signals triggered, the more likely an account is to be spam. Our Fake Followers system requires that at least a handful and sometimes as many as 10+ of the 17 spam signals be present (depending on which signals, and how predictive they are) before grading an account as “low quality,” or fake.

This methodology likely undercounts spam and fake accounts, but almost never includes false positives (i.e. claiming an account is fake when it isn’t).

Applying this model to the ~44K random, recently-active accounts provided Followerwonk produces a quality score for each account, visualized below: 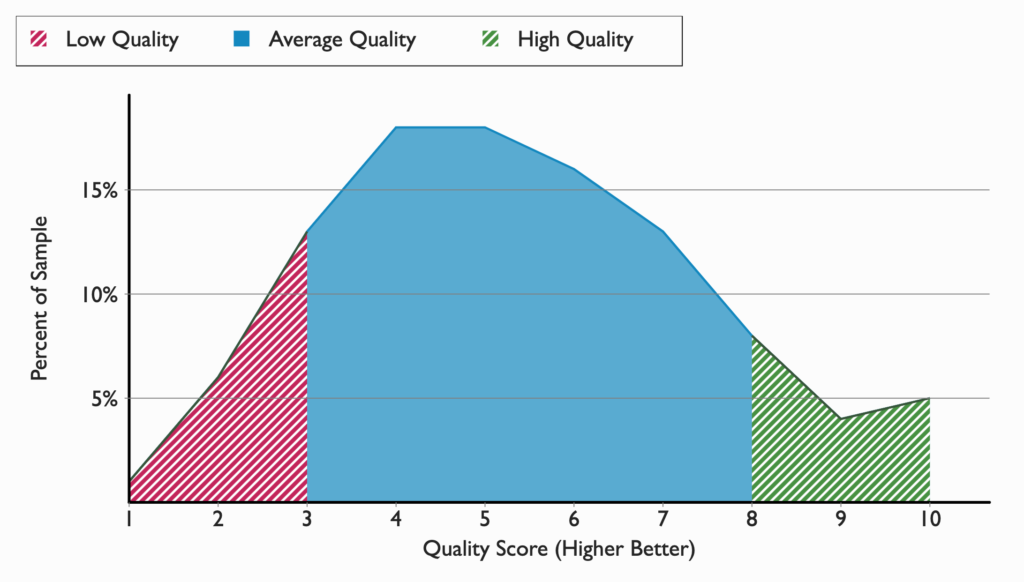 Above: quality score distribution of the 44,058 Twitter accounts analyzed in the Followerwonk Sample Set

The more spam-correlated flags an account triggers, the lower its Quality Score in this system will be. Our conservative approach means that we only treat scores of 3, 2, and 1 as fake/spam accounts, and it’s the combination of these three buckets that produces our final estimate, best-stated as: 19.42% of recently active, public Twitter profiles are extremely likely to be fake or spam.

Before concluding this post, I will pre-emptively address some potential questions:

Thanks to everyone who’s helped to spur and support this research, and especially to Casey Henry and Marc Mims, whose rapid and tireless weekend work made this report possible. As massive fans of Twitter’s platform, and the kindness shown by so many folks there, we’re honored to (hopefully) contribute to its continuing improvements.