Asteroid Ryugu was once part of a much larger parent body, new results find

source link: https://arstechnica.com/science/2022/09/asteroid-ryugu-was-once-part-of-a-much-larger-parent-body-new-results-find/
Go to the source link to view the article. You can view the picture content, updated content and better typesetting reading experience. If the link is broken, please click the button below to view the snapshot at that time.

Asteroid Ryugu was once part of a much larger parent body, new results find 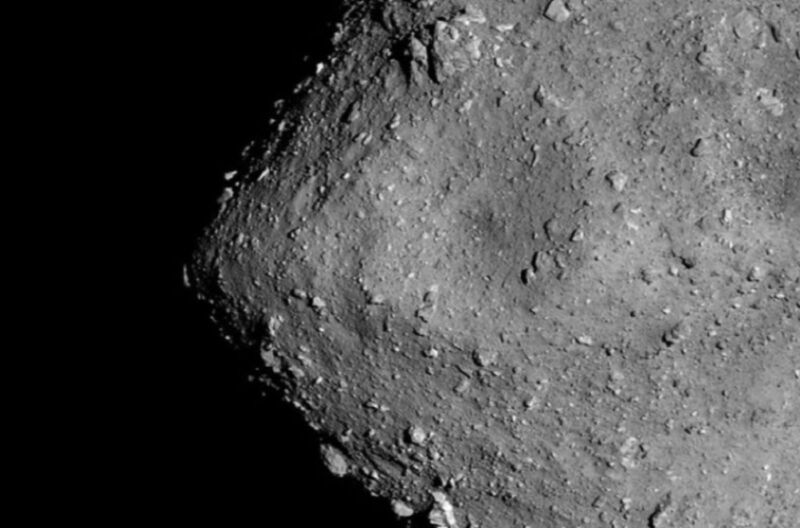 Enlarge / First spotted by astronomers in May 1999, Ryugu is essentially a large collection of loose rubble.

The Japanese spacecraft Hayabusa2 returned to Earth in December 2020 bearing soil samples collected from a nearby asteroid, 162173 Ryugu. Those samples were divided between six scientific teams around the world for cutting-edge analysis to determine their composition in hopes of learning more about how such bodies form. The results of the first year of analysis of those samples appeared in a new paper published in the journal Science and included the detection of a precious drop of water embedded in a crystal.

These findings suggest that Ryugu was once part of a much larger asteroid that formed out of various materials some two million years after our Solar System (some 4.5 billion years ago). Over the next 3 million years, the parent body's carbon dioxide ice melted, resulting in a water-rich interior and a drier surface. When another space rock hit the parent body about a billion years ago, it broke apart, and some of the resulting debris formed Ryugu. An accompanying computer simulation supports this formation history, backed by the results of the sample analyses.

First spotted by astronomers in May 1999, Ryugu is essentially a large collection of loose rubble. As much as 50 percent of its volume could be empty space. Like the asteroid Bennu, Ryugu is shaped a bit like a spinning top: a round shape with a sharp equatorial ridge. Its name derives from a Japanese folktale in which a fisherman travels to an underwater palace called Ryūgū-jō ("dragon palace") on the back of a turtle. 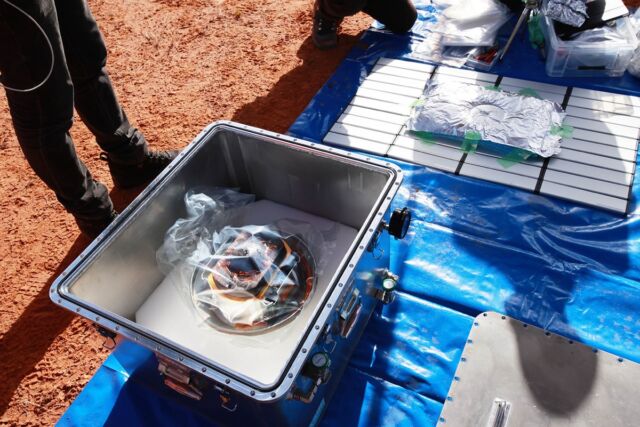 Enlarge / Scientists recovered a capsule containing samples from Ryugu after it landed in Australia.

Hayabusa2 has been in space since 2014, and it slowly made its way to an orbit 20 km above the surface of the asteroid Ryugu. In late 2018, the spacecraft made a close approach to the asteroid and released two small, solar-powered robots that hopped around on the surface. One of those was called MASCOT, the Mobile Asteroid Surface Scout. Despite landing upside-down, the robot eventually jumped into the right orientation. MASCOT's camera, a magnetometer, a radiometer, and an infrared spectrometer also sent back images to give scientists some sense of the materials around it and associate their properties with specific rocks. As Ars Science Editor John Timmer reported in 2019:

The first was darker and rough, with a surface appearance the researchers describe as "cauliflower-like." The second was brighter and had smoother surfaces and more angular shapes.... The Hyabusa2 team suspects that the features of the two different materials are the product of the heating/cooling cycles that take place as the rocks are exposed first to sunlight and then to the darkness of space. In some cases, this leads to the shattering of the rock, producing the smoother surfaces seen among some of the materials. In others, the rock slowly disintegrates, losing its internal structure and producing the other rocks observed by MASCOT.

The weird thing about that, however, is that crumbling and shattering rocks typically produce dust and sand-like materials. Yet there were no signs of any of this... They assume the smaller grains are either lost to space or end up working their way into the interior of the rubble. But the rocks that could be seen by MASCOT were all tens of centimeters across or larger (some were tens of meters).

Hayabusa2 collected surface samples by snuggling up to the asteroid and shooting it. The probe had a sample-gathering "horn," which was placed against the asteroid's surface. Then Hayabusa2 fired a bullet into the asteroid's surface, blasting material loose that was gathered by the horn and stored for return to Earth. Hayabusa2 also carried a heavier bullet intended to blast off the surface material to expose material that has remained protected for billions of years. A capsule containing the capsules landed in Australia in December 2020.

Last month, one team of researchers published the results of their analysis of dust samples from Ryugu in The Astrophysical Journal Letters, concluding that some of those grains of dust are older than our Solar System. The age of the grains in their dust can be identified and dated by their isotopic signatures, and the team compared the Ryugu dust samples to grains found in carbonaceous chondrite meteorites that have been found on Earth. The Ryugu dust sample held grains identical to others that have been seen in some of those meteorites that predate our Solar System.