source link: https://www.businessinsider.com/gop-far-right-wants-fbi-destroyed-and-defunded-2022-8
Go to the source link to view the article. You can view the picture content, updated content and better typesetting reading experience. If the link is broken, please click the button below to view the snapshot at that time.

Republicans rail against the FBI search of Mar-a-Lago, calling for the FBI to be destroyed and defunded 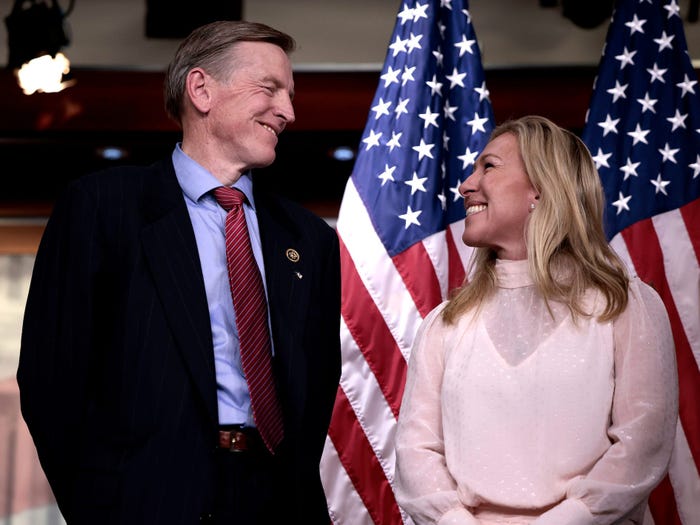 GOP Reps. Marjorie Taylor Greene of Georgia and Paul Gosar were among several Republican lawmakers calling for the FBI to be destroyed or defunded. Anna Moneymaker/Getty Images

The far-right faction of the Republican party is up in arms about the Federal Bureau of Investigation's search of Mar-a-Lago, calling for the agency to be defunded and destroyed.

Trump ally and Georgia Rep. Marjorie Taylor Greene was one of the first to tweet her disapproval of the search, posting on Twitter: "DEFUND THE FBI!"

She then followed that up with a tweet reading: "Elections are how Americans solve political differences. Not by radicalizing our federal law enforcement to take political enemies out. This is why we must protect election integrity."

She was joined by other GOP lawmakers who came out against law enforcement in support of Trump.

"The FBI raid on Trump's home tells us one thing. Failure is not an option," Arizona Rep. Paul Gosar tweeted. "We must destroy the FBI. We must save America."

Colorado lawmaker Lauren Boebert tweeted that she wanted the GOP to "set up a Select Committee to investigate the FBI's politically-motivated raid on Mar-a-Lago and on ALL the fraudulent persecution of President Trump from our government."

"This cannot wait. We are turning into a banana republic at record speed," Boebert wrote.

"What were you really doing? What were you looking for? Why not talk to President Trump and have him give the information you're after?" Jordan questioned angrily. "This is unbelievable!"

House Minority Leader Kevin McCarthy tweeted a warning to Garland, signaling that a GOP-controlled Congress would investigate the FBI's search of Trump's property.

"I've seen enough. The Department of Justice has reached an intolerable state of weaponized politicization," McCarthy tweeted. "When Republicans take back the House, we will conduct immediate oversight of this department, follow the facts, and leave no stone unturned," McCarthy wrote. "Attorney General Garland, preserve your documents and clear your calendar."

House Republicans' calls to defund and destroy a law enforcement organization stands in contrast to legislation their party introduced in May 2021 to "back the blue" in opposition to a progressive push to defund the police. As recently as May 2022, top-ranking Republicans like Rep. Elise Stefanik were still pushing the "back the blue" slogan — something that both Greene and Boebert have themselves staunchly supported.

The congressional lawmakers' posts join a chorus of conservative voices decrying the FBI's execution of a search warrant at Mar-a-Lago on Monday. For one, Trump's 2024 rivals like Florida Gov. Ron DeSantis and Florida Sen. Marco Rubio swooped in to support Trump on Monday.

In the midst of GOP lawmakers' allegations of the investigation being politically motivated, it is worth noting that Wray, the FBI chief, was a Trump appointee nominated in June 2017. At the time, Trump described him as "a man of impeccable credentials."

It is unclear what investigation the search warrant for Mar-a-Lago was related to, though three sources told CNN it was related to whether or not Trump mishandled classified government documents. The National Archives also asked the DOJ in February to look into whether Trump broke laws by removing documents from the White House and bringing them to Mar-a-Lago.

Legal experts told Insider on Monday night that securing a federal search warrant against an ex-president is no easy feat. The experts said agents must prove an extremely high degree of probable cause and that the FBI likely had an overwhelming amount of credible evidence ahead of the search before even applying to a judge to grant such a warrant.