Oil Slumped Below $100 on Growth Fears. Here's What Happens Next.

source link: https://markets.businessinsider.com/news/commodities/oil-price-forecast-recession-economy-inflation-rates-wti-crude-analysts-2022-7
Go to the source link to view the article. You can view the picture content, updated content and better typesetting reading experience. If the link is broken, please click the button below to view the snapshot at that time.

Oil has plunged below $100 as recession fears spike. This is what happens next, according to top Wall Street analysts. 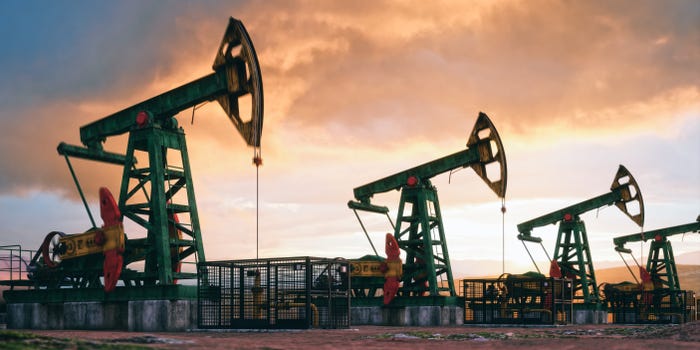 Oil prices are up sharply this year, but dropped on Tuesday. imaginima/Getty Images

Oil prices tumbled on Tuesday as growing concerns about a global recession caught up with energy markets.

WTI crude, the US oil price, fell the most since April to a four-month low below $100 a barrel. Brent crude, the international benchmark, fell as low as $101, down from close to $140 in early March.

The sharp drops in prices came as traders dialed down their expectations for demand, with economists' warnings about a possible central bank-driven recession growing louder. The strength of the US dollar — oil is priced in bucks — also weighed on the market.

Goldman Sachs' team, led by Damien Courvalin, said oil prices have fallen too far. They said demand is still too strong for suppliers to handle, especially given the low levels of oil stockpiles around the world.

"While the odds of a recession are indeed rising, it is premature for the oil market to be succumbing to such concerns," they said in a note to clients Tuesday.

"The global economy is still growing, with the rise in oil demand this year set to significantly outperform GDP growth, buttressed by the post-COVID re-opening in Asia-Pacific as well as the resumption in international travel."

Goldman predicts WTI crude will stand at $125 a barrel in six months' time, with Brent crude at $130 a barrel.

As oil tumbled, Deutsche Bank's strategists were busy increasing their oil price forecasts, saying they expect supplies from Russia to fall throughout the year.

The EU is planning a near-total ban on Russian oil imports, which is likely to slash purchases by 90% by the end of the year. Meanwhile, the G7 is exploring plans to cap Russian oil prices. Both of these factors mean Russian production will fall, according to Deutsche.

"With prospects of stricter sanctions on Russian oil exports the global crude oil supply-demand balance is expected to tighten over the next few quarters," the bank's analysts, led by James Hubbard, said.

They said in the most pessimistic scenario for prices, in which demand drops sharply but Russian supply holds up, oil prices could tumble to $55 a barrel by the end of 2022. Citi made a similar point yesterday, saying a drop to $65 by year-end is possible.

"Gasoline and diesel are at record-high prices, and the markets could soon see demand destruction as consumer elasticity turns negative."

They said they expect Russian oil production to fall in the near future, although they did say that the risks to demand are growing.

"Given the expectation that Russian oil supply will decline as we move through the year, the market is set to remain tight. Therefore, we expect any further downside in the market to be fairly limited."