source link: https://www.wired.com/story/why-cant-a-magnet-propelled-truck-actually-work/
Go to the source link to view the article. You can view the picture content, updated content and better typesetting reading experience. If the link is broken, please click the button below to view the snapshot at that time.

The internet thinks it has discovered the secret to fuel-free perpetual motion. Physics knows better. 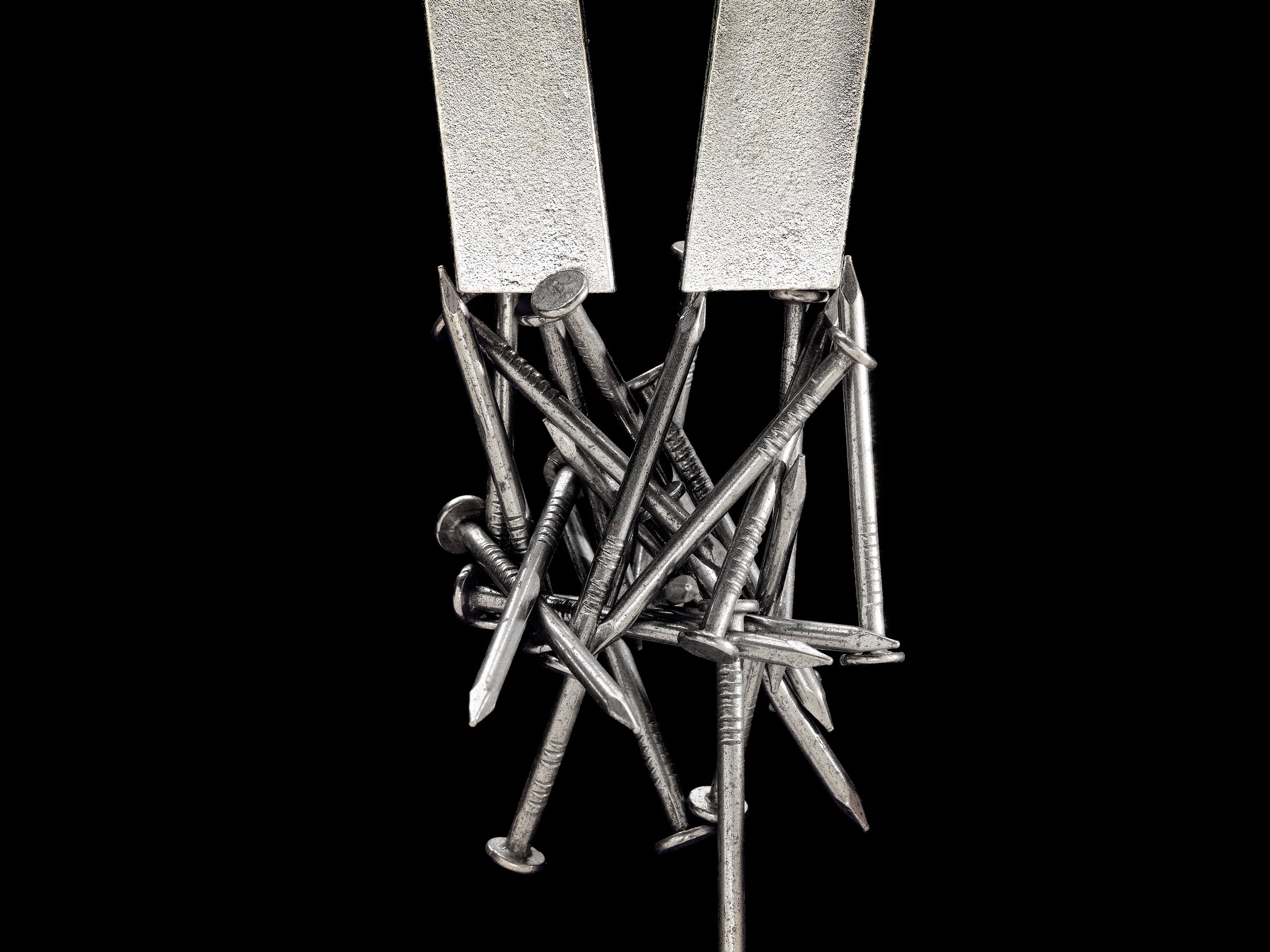 There’s a long-circulating meme on the internet that is basically a question: Would a magnet-propelled vehicle work? (Here’s a version of it posted on Reddit.) It’s a very simple drawing of a pickup truck with a thick metal plate attached to the front. A crane arm extends from the back of the truck over the cab, and it holds a strong magnet out in front of the vehicle. The theory here is that the magnet will attract the plate and pull the truck forward, essentially producing perpetual motion without the need for fuel.

Here’s my version of this drawing: 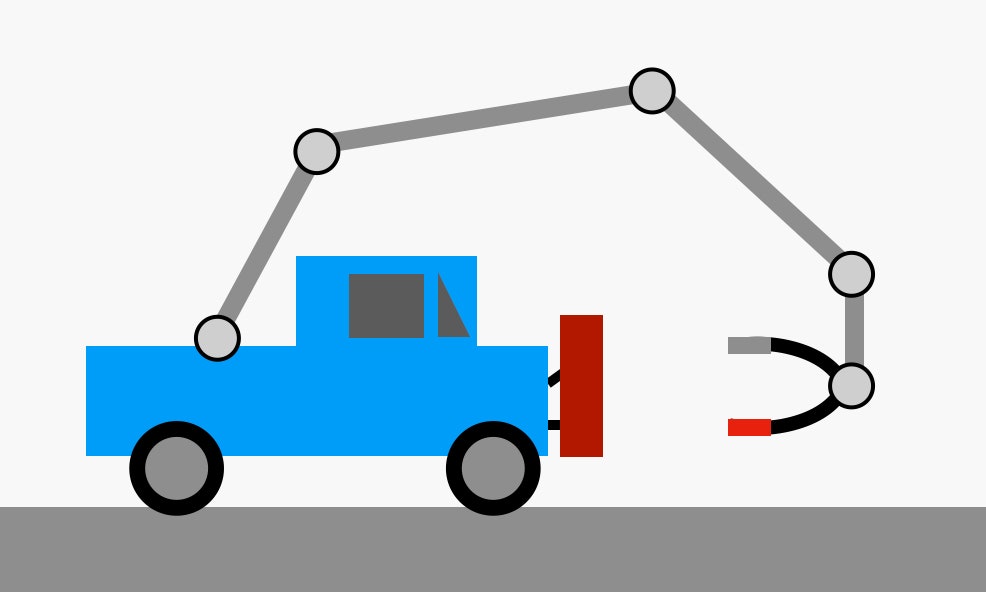 OK, you probably already guessed that this wouldn't work. (I mean, if it did, we would already be driving around in our fuel-free magnet cars, right?) But why not? And is there a way we could make one work?

The Fundamental Nature of Forces

One important thing to notice is that all of these examples are interactions between two objects. You couldn't have an interaction between a person and a chair without the chair. This is also true for the Earth and a person, and a magnet and metal.

Let's look at the interaction between two generic objects, A and B. If object A pushes on object B, then object B also pushes on object A with the exact same strength of force but in the opposite direction. We often refer to this as Newton's third law: For every force there is an equal and opposite force.

You can actually measure these equal and opposite forces. Let's take two carts on a low-friction track. Both carts have force sensors mounted on top, and the two sensors are connected together with a rubber band.

What happens when I pull them apart? The right cart pulls on the left cart. The left cart pulls back with the same force, but in the opposite direction. (Actually, in this case there is also the rubber band, but since it has such a low mass we can just pretend like it's some fundamental force, like gravity or a magnetic force.)

Here is what the two force sensors read during this interaction:

Thanks to Newton's third law, the two sensors have force measurements that are pretty much the same strength.

There's one other force rule that we need to consider for our hypothetical magnet-powered vehicle. It's Newton's second law, which says that a net force on an object changes that object's velocity. You might have seen this law expressed as the following equation:

In this one-dimensional equation, the total force, or net force, is equal to the product of an object's mass and its acceleration. (There is a vector version of this too, but don't worry about it.)

The acceleration tells you how fast the object's velocity changes. But if the net force on an object is zero, then the acceleration must also be zero. If an object is at rest with zero acceleration, then it would have to stay at rest. This is also important for our magnet-propelled truck.

Of course, the first step in testing whether this idea would work is to just try out a real-world model. That's pretty simple. I don't need a full-size version; I can just use my low-friction carts with a type of magnet crane as a stand-in. Here's what I built:

On the left, you can see a large neodymium magnet attached to a Lego-based crane, which is connected to the cart with tape. Just in case you haven't used these things before, they are quite powerful. There is a good-sized iron bar attached to the cart itself. There is indeed quite an attractive force between the magnet and the iron—it's more than strong enough to pinch your finger if you aren't careful.

The test is simple: Will the magnet’s force on the iron bar get the whole thing moving?

Of course … it doesn’t work. The cart doesn’t accelerate, and it doesn’t move. (I could have posted this as a movie, but a movie that doesn’t move really isn’t that much fun.)

So why doesn't it work? Perhaps the best place to start is with a slightly different magnet cart that does accelerate. Check this out:

Now the cart (on the right) not only moves but accelerates and increases in speed as it moves to the left.

Let's look at the forces on this cart with a force diagram. (We often call this a free-body diagram.)

That leaves the final force between the magnet and the cart with nothing to oppose it. With this net force pulling to the left, the cart goes from being at rest to moving, and then moving faster. It's a real-life magnetic vehicle—just like you always wanted!

This makes it seem like the magnet truck idea could work. But to see why it doesn’t, we need a force diagram for the cart with the magnet and crane. Actually, since it gets messy, I will create three different diagrams. There will be one for the cart, one for the crane, and one for the magnet. (Don't worry, I color-coded the forces for you.)

Let's start with the forces on the cart. There's only one difference now that the magnet and crane are added—that's the force of the crane pushing on the cart. Notice that now the total force (the net force) on the cart is zero.

Then there is the gravitational force on the magnet, which is balanced by an upward-pulling force from the crane. The crane also pushes to the left on the magnet to keep it from crashing into the cart.

Finally, we have the crane itself. I left off some of the unimportant forces here—the most critical are the forces from the magnet and the cart pulling in opposite directions.

All of these objects have a net force of zero. That's the important part: With a zero net force, there will be a zero acceleration. These three objects that start with a velocity of zero will stay at zero. They won't move. It won't work.

I think part of the reason it’s hard to grasp why this won’t work is that you can't directly see the attractive interaction between the magnet and the cart. That sort of makes it seem like magic—and magic can make things move.

It doesn't move, and I don't think anyone would expect it to. But it's essentially the same as the magnet cart.

I like to use old cartoons as examples, and in the Looney Tunes Road Runner series, Wile E. Coyote is always trying to find new ways to catch the very fast-moving bird—or maybe a silly rabbit. Usually he gets things wrong, but every once and a while he just happens to be right. Well, sort of right.

In the episode below, he puts out some bird seed with extra iron. After the Road Runner eats it, Wile E. attaches a magnet to himself so that he can catch that bird.

Of course, it doesn't work, because in the cartoon the magnet gets attracted to a moving train, and so Wile E. crashes into it. And, more realistically, in this case the magnetic interaction would produce an extremely tiny force that wouldn't be enough to overcome friction.

However, the main idea is at least based on something real. Did you notice that with this Wile E. Coyote method, the magnet and iron are attached to two separate things? That's the important part. Remember that forces come in pairs. The magnet pulls on the Road Runner, but the Road Runner pulls back on the magnet. Since the force from the magnet is on the Road Runner and not on some part of Wile E., that means those forces don’t cancel and he is able to zoom off to his own destruction.

In the end, when things look too good to be true, they probably are.