source link: https://techxplore.com/news/2022-05-emirates-air-lost-billion.html
Go to the source link to view the article. You can view the picture content, updated content and better typesetting reading experience. If the link is broken, please click the button below to view the snapshot at that time. 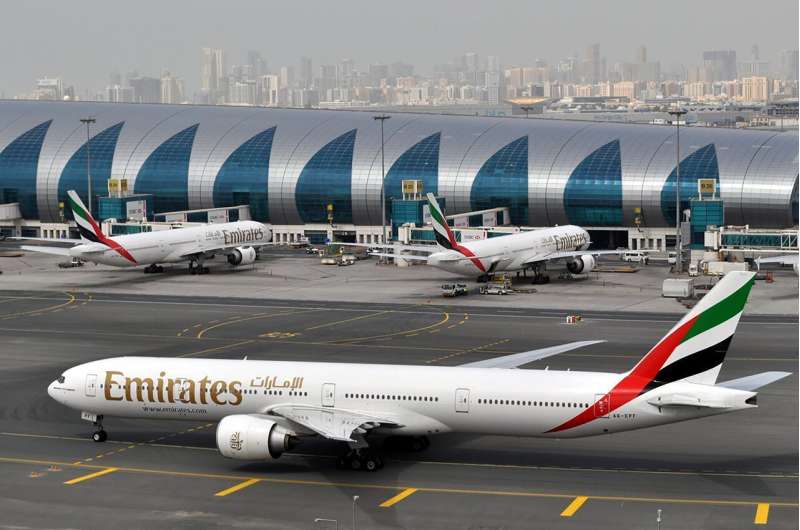 An Emirates plane taxis to a gate at Dubai International Airport at Dubai International Airport in Dubai, United Arab Emirates, on Wednesday, March 22, 2017. One of the world’s biggest airlines and the Mideast’s top carrier, Emirates Air, said Friday, May 13, 2022, it lost $1.1 billion over the past fiscal year, but the figure still marks an 80% improvement from the year before. The airline said revenue was up 91%, reaching $16.1 billion. Credit: AP Photo/Adam Schreck, File

One of the world's biggest airlines and the Mideast's top carrier, Emirates Air, said Friday it lost $1.1 billion over the past fiscal year, but that figure still marks an 80% improvement from the year before. The airline said revenue was up 91%, reaching $16.1 billion.

As Emirates Air claws it way out of the worst of the pandemic, its main hub of Dubai International Airport remains the busiest in international travel.

Emirates expects to climb out of the red and see profits this year as it plans to start paying back its shareholder, the Dubai government, some of the $4 billion it threw the airline to stay afloat amid COVID-19 lockdowns.

The carrier's success and financial health is seen as a bellwether of Dubai's own economy, which relies heavily on tourism, foreign investments and real estate purchases by the world's elite. The emirate, which is part of the United Arab Emirates, was quick to swing open its doors to foreign travelers with few requirements for entry after a brief, but extremely stringent lockdown period in 2020.

Chairman and chief executive of Emirates, Sheikh Ahmed bin Saeed Al Maktoum, said business recovery picked up pace in the second half of the fiscal year, with demand for travel coming back. It's unclear how much of that was related to travel to visitors coming to Dubai to experience its six-month-long World Fair, or Expo, that ended in March.

The airline had posted a staggering $5.5. billion loss in the previous fiscal year—the first time the airline had not churned out a profit in more than three decades.

The wider Emirates Group, which operates ground services provider dnata, said dnata was profitable over the past fiscal year, reversing a $496 million loss in the previous year into $30 million in profit. Overall revenue topped $18 billion, an 86% improvement from the year before. Its fiscal year spans April 2021 to March 2022.

"We expect the Group to return to profitability in 2022-23, and are working hard to hit our targets, while keeping a close watch on headwinds such as high fuel prices, inflation, new COVID-19 variants, and political and economic uncertainty," Al Saeed said in Friday's earnings report.

Fuel costs, which have skyrocketed in recent months, accounted for nearly a quarter of total operating costs in the past fiscal year. The airline said its fuel bill more than doubled to $3.8 billion compared to the previous year because of its expanded number of flights and fuel prices that are up by 75%.

Emirates Group said that as operations have ramped up, employees previously let go were recalled and rehired, while new recruitment drives were held. The airline's chairman said earlier this week that staffing levels are up to around 80% of what they were before the pandemic. The company says it employs 85,219 employees from across the world, making it one of Dubai's biggest employers.

The airline, which has a reputation of comfort for its in-flight cabin luxuries and newer aircraft, flies to around 140 cities around the world, including 12 in the U.S. It launched a new route to Miami in July. It recently announced it will retrofit 120 of its Boeing 777 and A380 aircraft with new Premium Economy seats.