source link: https://www.businessinsider.com/doj-supports-january-6-committee-subpoena-of-mark-meadows-2022-7
Go to the source link to view the article. You can view the picture content, updated content and better typesetting reading experience. If the link is broken, please click the button below to view the snapshot at that time. 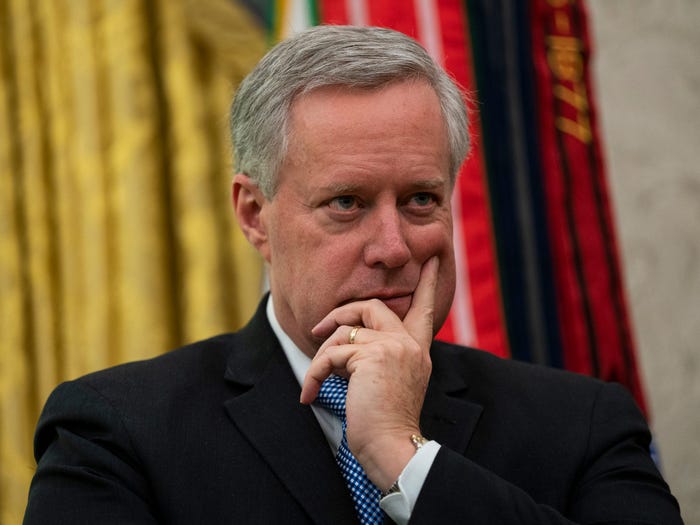 The Department of Justice said the House select committee investigating the Capitol riot was justified in its subpoena of former White House Chief of Staff Mark Meadows.

The determination was made in a court statement filed Friday as part of a civil lawsuit brought by Meadows in December against House Speaker Nancy Pelosi and members of the January 6 committee. He filed the lawsuit after the committee had subpoenaed him for testimony and documents.

The judge in the case asked the Department of Justice to evaluate whether or not Meadows had immunity that would allow him to ignore the subpoenas. But in its filing Friday, the Justice Department said that as a former adviser to a former president, he did not.

"When a congressional committee demands testimony from an immediate presidential adviser after the President's term of office has ended, the relevant constitutional concerns are lessened," the filing said. "Accordingly, the Department does not believe that the absolute testimonial immunity applicable to such an adviser continues after the President leaves office."

The filing said the adviser does have "a form qualified immunity" but that it can be overruled if Congress can make "a sufficient showing of need" for the information.

The Justice Department's conclusion comes a month after it declined to hold Meadows in contempt of court for not complying with the House subpoenas and refusing to testify. The decision was met with some criticism, including from Democratic Rep. Adam Schiff, who is also a member of the House select committee.

It also comes as reports suggest Trump's inner circle is anticipating Meadows' downfall over January 6. Lawyers for Trump told Rolling Stone this week that they believe Meadows will be a fall guy.

"Mark is gonna get pulverized," one of Trump's legal advisers told the magazine, which spoke with eight unnamed sources for its report. "And it's really sad."

The lawyer added that he believed Meadows did not buy into the election lies but was "trying to perform" for Trump and may have "screwed himself completely."

Meadows was also tied up in the explosive testimony of Cassidy Hutchinson, who served as a top aide to Meadows at the time of the Capitol riot. Hutchinson testified that Meadows was among the Trump allies who preemptively sought a pardon from the former president. She also said that Meadows had told her in January that he thought "things might get real, real bad."

A lawyer for Meadows did not immediately respond to Insider's request for comment.