Poll: Liz Cheney Is Down 22 Points to Her Trump-Backed Primary Foe

source link: https://www.businessinsider.com/poll-liz-cheney-is-down-22-points-wyoming-primary-trump-7
Go to the source link to view the article. You can view the picture content, updated content and better typesetting reading experience. If the link is broken, please click the button below to view the snapshot at that time.

Poll: Liz Cheney is down 22 points and on the cusp of getting trounced by Harriet Hageman, her Trump-backed GOP opponent 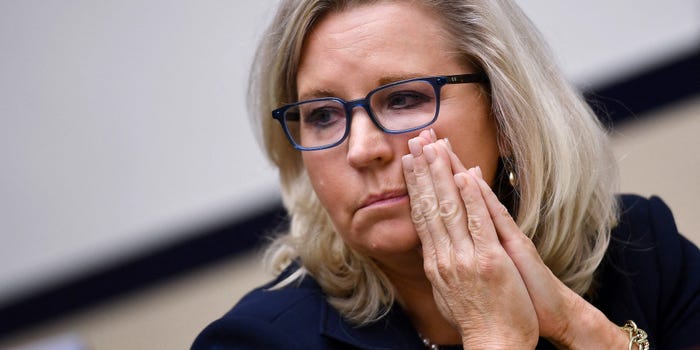 According to a Casper Star-Tribune poll, Cheney trails Hageman 52% to 30% in a poll of likely primary voters. The same survey found that only 27% of Wyomingites have a favorable view of the top Republicans on the House January 6 committee and the eldest daughter of former Vice President Dick Cheney.

"The big story is Liz Cheney is going to get beat," said Brad Coker, manager of the Mason Dixon Polling & Strategy, the firm that conducted the survey, told the Star-Tribune. "That's a foregone conclusion."

Up until now, there had been scant independent polling of what is a closely watched race.

A primary loss would cap a stunning split from what is now the Trump-influenced mainstream GOP; Cheney was once the No. 3 House Republican. Now, former President Donald Trump has made it one of his personal missions to see her forced out of the party. House Minority Leader Kevin McCarthy has even taken the rare step of endorsing Hageman as well.

The survey found that the January 6 investigation, which Cheney has presented as her most important legacy in public service is further disillusioning voters. According to the poll, 54% of voters were less likely to support Cheney because she's helping probe the Capitol attack and what led up to it.

Cheney's campaign has hoped that Democratic or independent voters crossing over in the primary might help save her. But it's unlikely there are enough of them to sustain a victory. In the poll, 69% of crossover voters say they would back Cheney. Yet, she still trails by 22 percentage-points overall.

Most of the other 10 House Republicans who voted to impeach Trump either have retired or have become more muted in their criticism of the former president. Cheney has done neither. In fact, she recently spoke at the Ronald Reagan Presidential Library in California, delivering a blistering speech that suggested Republicans must choose between the truth and Trump.

"At this moment, we are confronting a domestic threat that we have never faced before: and that is a former president who is attempting to unravel the foundations of our constitutional Republic," Cheney said at the time. "And he is aided by Republican leaders and elected officials who have made themselves willing hostages to this dangerous and irrational man."

A representative for Cheney's campaign was unable to be immediately reached.

The Casper Star-Tribune poll was conducted from July 7-11, shortly before early voting began. Pollsters surveyed 1,100 registered Wyoming voters likely to participate in the primary. The margin of error is +/- 3%.