source link: https://www.businessinsider.com/adam-schiff-biden-mbs-fist-bump-worth-a-thousand-words-2022-7
Go to the source link to view the article. You can view the picture content, updated content and better typesetting reading experience. If the link is broken, please click the button below to view the snapshot at that time. 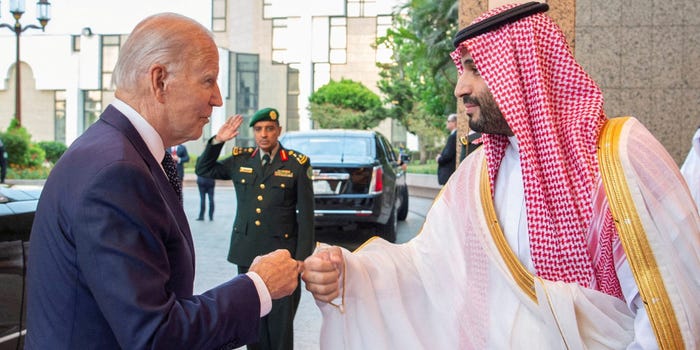 "If we ever needed a visual reminder of the continuing grip oil-rich autocrats have on US foreign policy in the Middle East, we got it today," Schiff tweeted. "One fist bump is worth a thousand words."

On Friday, Biden met with the Saudi leader known as MBS — who is linked to the murder of Saudi Washington Post columnist Jamal Khashoggi — less than a month after promising he wouldn't meet with him.

"I'm not going to meet with MBS," Biden told reporters last month. "I'm going to an international meeting, and he's going to be part of it."

During his campaign, Biden also promised to make the kingdom a "pariah" state for its role in Khashoggi's murder.

Friday's meeting was part of Biden's first trip to the Middle East and focused on trying to increase Saudi oil production to the US in light of record-high gas prices. The bilateral meeting was kicked off by a fist bump between the two leaders at Al Salam Royal Palace, which triggered backlash given the friendly nature of the gesture.

The meeting also followed the release of a US intelligence report in 2021 that directly ties MBS to the murder of Khashoggi, who was brutally murdered by Saudi henchmen at the Saudi consulate in Istanbul in October 2018.

That report enabled the Biden administration to place sanctions on a number of Saudi individuals named in the report, though MBS did not face any economic penalties.

When an NBC reporter asked MBS during the meeting if he'd apologize to Khashoggi's family, he smirked.

Khashoggi's fiancee also criticized the meeting between Biden and MBS, sharing a tweet captioned, "What Jamal Khashoggi would tweet today."

"Hey @POTUS, Is this the accountability you promised for my murder? The blood of MBS' next victim is on your hands," the fake tweet read.