US Is Still on the Way to Becoming a Fascist Country: Sociologist

source link: https://www.businessinsider.com/fascist-country-us-on-way-becoming-sociologist-2022-11
Go to the source link to view the article. You can view the picture content, updated content and better typesetting reading experience. If the link is broken, please click the button below to view the snapshot at that time.

The US is still on the path to becoming a 'fascist country': sociologist 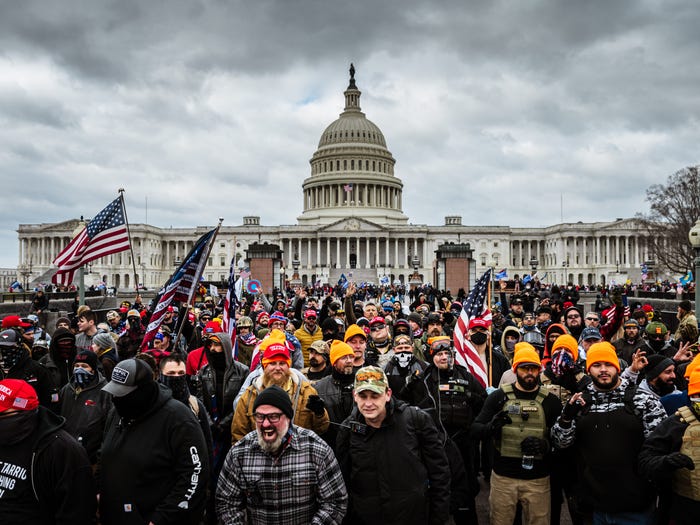 Top editors give you the stories you want — delivered right to your inbox each weekday.
Email address
By clicking ‘Sign up’, you agree to receive marketing emails from Insider as well as other partner offers and accept our Terms of Service and Privacy Policy.

A veteran sociologist and activist has warned that the US is still on the path to becoming a fascist country.

In an interview with The Guardian published on Thursday, Frances Fox Piven — an academic once targeted and threatened by far-right figures — warned that Americans should not get complacent after the midterms, where a widely-anticipated red wave for the Republican Party failed to materialize. The GOP, though, did take control of the House.

"I don't think this fight over elemental democracy is over, by any means," Piven told The Guardian. "The United States was well on the road to becoming a fascist country – and it still can become a fascist country."

The idea that America could come under fascist rule has been discussed, sometimes with reference to former President Donald Trump. For instance, former Trump lawyer and fixer Michael Cohen warned in October that Trump is a standard bearer for corrupt dictator wannabes" and a "poster boy for fascism."

Piven is not the only academic who has predicted a fascist tilt to American politics in the future.

In January, noted political scientist Thomas Homer-Dixon warned that American democracy could collapse if Trump wins in 2024. In an op-ed in The Globe and Mail, Homer-Dixon, who describes himself as a "scholar of violent conflict," warned that the US is becoming "increasingly ungovernable." He also predicted that the US could "descend into civil war" if it continues on its current path.

While the 2022 election results mean the Democratic Party retains control of the Senate, Piven cautioned that there are many things still in place that might lead America down the path to fascism.

"There is the crazy mob, MAGA; an elite that is oblivious to what is required for political stability; and a grab-it-and-run mentality that is very strong, very dangerous," Piven told The Guardian.

"I was very frightened about what would happen in the election, and it could still happen," she added.

Piven added that in the years to come, there will be "vengeance politics" and attacks on President Joe Biden from the right wing — particularly in a Republican-controlled Congress.

"The MAGA mob is not a majority of the American population by any stretch of the imagination, but the fascist mob don't have to be the majority to set in motion the kinds of policies that crush democracy," she added.