Bargains galore in the market for office furniture

source link: https://www.bbc.com/news/business-63228999
Go to the source link to view the article. You can view the picture content, updated content and better typesetting reading experience. If the link is broken, please click the button below to view the snapshot at that time.

Bargains galore in the market for office furniture 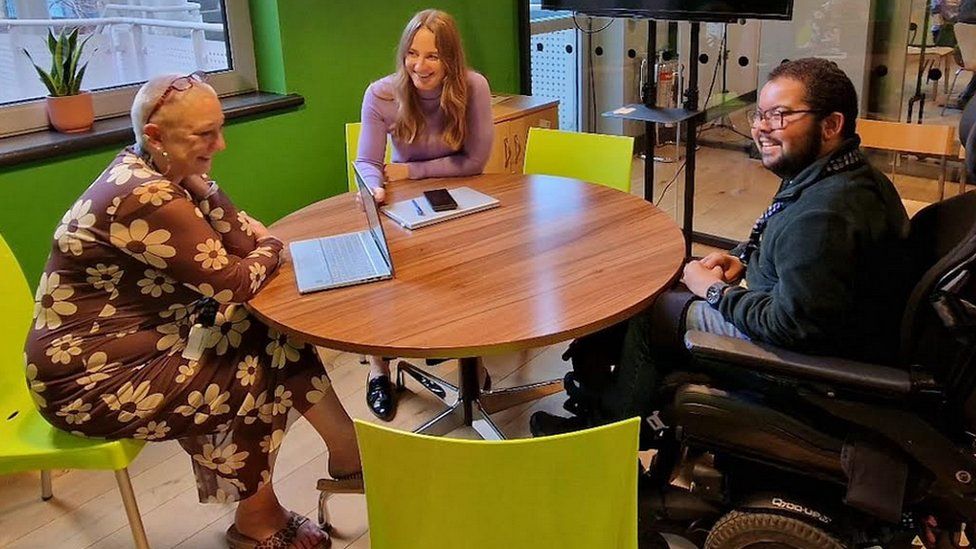 Funky green chairs. Dark wood for the desks - no white melamine, definitely not. And it has to be wheelchair-friendly.

That's what Jane Brearley, chief executive and founder of start-up Intent Health, had in mind when she was setting up her firm's new office in central London.

Accessibility and aesthetics were key - but it didn't matter if the desks and chairs had already been used by someone else. That just meant they came at a bargain price.

"I probably saved about 19, 20 grand by kitting out with second-hand furniture," she says.

The pandemic caused a huge shift in working practices. While some have fully embraced working from home, others are returning to the office, perhaps part-time. As a result, many companies are downsizing central offices and that means a glut of second-hand desks, chairs and filing cabinets is available to those who want them.

In Dr Brearley's case, the new office is sometimes empty since her staff choose to work from home much of the time - but she argues it's worth having anyway.

"I have young people on the team who are working out of their bedroom or from their kitchen in a flat share, it's really important that they have a place they can go," she explains, adding that the office is useful for training, too.

Some of Dr Brearley's colleagues use wheelchairs so it was important to find furniture that would meet everyone's needs and also allow for plenty of space in the office.

She was able to source desks, chairs, meeting room equipment and personal lockers from multiple second-hand suppliers. The only thing she struggled to find was sofas, so those came new.

A wide variety of organisations are in the market for second-hand office furniture these days. Even former Prime Minister Liz Truss turned to pre-used kit for her campaign office, according to the firm that says it was the supplier.

Image source, WantDontWant.com
Image caption,
It's not just chairs and tables says Adrian Preston of WantDontWant who has sold a used climbing wall

Besides cost, organisations are also attracted by the idea that re-using furniture is more environmentally friendly, on the whole, than buying it new, says Adrian Preston, managing director of WantDontWant.com.

"There's so much in the news about reusing, recycling now. They want to be seen to be doing the right thing," he explains.

Mr Preston's firm brokers the sale of second-hand furniture between his clients and the companies that are offloading it, rather than stocking large volumes himself. However, one thing he never bothers with is window blinds: "They're a nightmare because they're bespoke to the windows they come from and they're dusty, dirty and grubby."

It means his firm has the pick of the quality it wants, he adds, noting that second-hand stock is particularly popular with home workers and small firms or start-ups.

The market is certainly very active at the moment, says Karl Ward - no relation - managing director of ORS, another second-hand furniture retailer: "We've just had the busiest quarter we've ever had, by quite some distance."

Image source, ORS
Image caption,
Secondhand furniture seller ORS is the busiest it has ever been

There is sometimes a long wait for new furniture, and this has been a particular problem during the pandemic, he notes.

Retailers who spoke to the BBC suggested that the most popular items tend to be desks, chairs and filing cabinets. But you can be more imaginative, if you want.

Mr Ward of ORS mentions that a few months ago he sold a luxury six-by-two metre marble boardroom table, which he says was "the best boardroom table I've ever seen". Brand new it would have cost £65,000, he estimates. A customer took it for £22,000.

Mr Preston has also shifted some unusual items - including a climbing wall and 100 biscuit tins shaped like Stormtrooper helmets from Star Wars. "I bought four of those for my office as well," he adds.

Image source, The Coggin Group
Image caption,
With a little work Sam Coggin says that secondhand furniture can be returned to an almost new state

While some second-hand furniture comes in great condition, it does occasionally require refurbishment as well. Sam Coggin, company director of The Coggin Group says his company specialises in this.

With tired office chairs, for example, his team can replace stiff casters or worn-out gas lifts, the devices that allow people to adjust the height of a chair seat. Mr Coggin and his colleagues can also repaint legwork on desks or cut them down to a smaller size and refinish them.

Currently, the firm is resizing around 200 desks for one client who found they were too big for their office.

The idea is to keep as much of the item in use as possible and process any removed materials for recycling - including plastics, metals and foam.

Image source, ORS
Image caption,
There is no shortage of secondhand chairs to choose from

"If we can keep 80 to 90% of the product original and just replace parts that wear down… it does bring them back to a like-new standard," says Mr Coggin.

Someone who turned to second-hand furniture with a very specific purchase in mind, and found what she wanted, is Liana Fricker, founder of accelerator The Inspiration Space.

When her husband's firm sent a well-engineered office chair to their house during the pandemic, she realised it was exactly what she wanted - very comfortable and good for her back, too.

She soon found the same model second-hand online and snapped it up.

Besides enjoying the process of hunting for the chair she wanted, she adds that she appreciates the opportunity to contribute to the circular economy - where products are re-used or recycled wherever possible.

"It boils down to the environment," she says.

"If we're buying second-hand goods, we'll send a signal to the market that we don't want cheap, disposable items anymore."