source link: https://www.techradar.com/news/cocoon-is-a-charming-new-sci-fi-puzzler-from-the-designer-of-limbo
Go to the source link to view the article. You can view the picture content, updated content and better typesetting reading experience. If the link is broken, please click the button below to view the snapshot at that time. 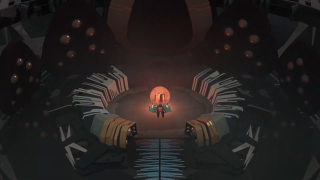 Cocoon, a new sci-fi puzzler from the designer behind Limbo and Inside, made its debut at the Xbox and Bethesda Games Showcase – and we're already intrigued.

In development at indie studio Geometric Interactive, and published by Annapurna Interactive, the world premiere trailer for Cocoon showed the winged protagonist emerging from a metallic cocoon before running around a futuristic map placing glowing orbs on censors and using other orbs to grapple upwards and onto objects. Check it out below:

According to the trailer's YouTube description, Cocoon "takes you on an adventure across worlds within worlds" and will see you mastering "world-leaping mechanics to unravel a cosmic mystery".

Frankly, we were sold once we realized Jeppe Carlsen, the lead gameplay designer of Inside and Limbo, was on board. But we imagine that, given the dark nature of those games, Cocoon may prove to be somewhat less wholesome than the trailer insinuates.

Cocoon releases in 2023 for Xbox consoles and PC and will be available on Xbox Game Pass on day one.

Vic is TechRadar Gaming's Associate Editor. An award-winning games journalist, Vic brings experience from IGN, Eurogamer and more to the TechRadar table. You may have even heard her on the radio or speaking on a panel. Not only is Vic passionate about games, but she's also an avid mental health advocate who has appeared on both panels and podcasts to discuss mental health awareness. Make sure to follow her on Twitter for more.