German scientists built a high-resolution microscope out of Lego bricks

source link: https://arstechnica.com/science/2021/07/german-scientists-built-a-high-resolution-microscope-out-of-lego-bricks/
Go to the source link to view the article. You can view the picture content, updated content and better typesetting reading experience. If the link is broken, please click the button below to view the snapshot at that time.

German scientists built a high-resolution microscope out of Lego bricks

The only non-Lego components are the lenses, salvaged from smartphone cameras. 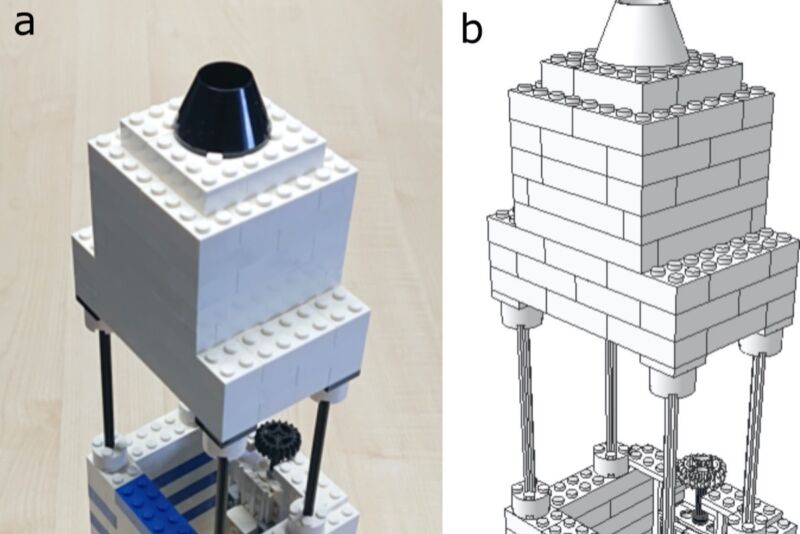 German scientists have built a high resolution microscope out of Lego parts and components salvaged from a mobile phone, according to a recent paper published in The Biophysicist. They found that children who undertook the project—including building their microscopes and conducting several at-home experiments—gained enhanced understanding of how microscopy works. It's part of an ongoing "frugal science" trend: using cheap consumer hardware and open-source software to build low-cost scientific instruments. The DIY tools are perfect for educational environments and for field use in developing countries.

"An understanding of science is crucial for decision-making and brings many benefits in everyday life, such as problem-solving and creativity," said co-author Timo Betz of the University of Göttingen. "Yet we find that many people, even politicians, feel excluded or do not have the opportunities to engage in scientific or critical thinking. We wanted to find a way to nurture natural curiosity, help people grasp fundamental principles, and see the potential of science."

Perhaps the best known low-cost DIY instrument to date is the Foldscope, an optical microscope easily assembled out of a sheet of paper and a lens. It comes as a kit, which includes magnets so users can attach a smartphone to the Foldscope and take pictures of the magnified samples. It's robust enough to survive being dropped or getting wet, and the magnification is strong enough to view E. coli and malarial parasites in a sample.

Lego bricks have proved to be a useful resource for affordable components for such DIY instruments. For instance, in 2014, an international team of students constructed an atomic force microscope (AFM) using Lego bricks as some of the components. Unlike a conventional microscope, in which the user views a sample through the eye piece, an AFM is more like an old-school record player. A tiny needle attached to a cantilever (arm) moves across the sample, bobbing up and down in response to any bumps on the sample's surface. Those bumps are "detected" via changes in reflected laser light off the cantilever.

The students built their AFM out of Lego bricks, 3D printed parts, and Arduino computers. The only two components they had to order were a split quadrant photodetector and piezo actuators. Granted, the resulting AFM was only suitable for imaging very small areas, but the whole thing cost just a bit over $400. That's a steal compared to the over $100,000 price tag for a cutting-edge, research grade AFM. And in 2015, NIST scientists developed a low-cost watt balance out of Lego bricks and some basic electronics.

Betz and his colleagues have found that the fundamental working principles behind the microscope are just counter-intuitive enough to be a challenge for students (and a fair number of adults). They also noted that despite microscopes being an essential scientific tool, their use in classrooms—or at home, especially during the global pandemic—has been limited, due to the cost and fragility of the instruments. So they decided to build a cheaper version out of Lego bricks, inspired by a previous version of a Lego  microscope called the LegoScope. The team thought they could improve on the design, since the LegoScope still required custom 3D-printed parts.

They used a glass lens for the low-magnification objective, built into a holder linked to the same attachment brick as the high-magnification objective. For illumination, they used a special Lego brick that integrated an orange LED, although they replaced it with one of a different color. In case of nonuniform illumination, they showed how one can make a diffuser out of a thin sheet of paper, placing it between the LED and the sample. A flat surface of Lego bricks made an excellent sample holder.

The objective holder proved to be the most challenging component to build out of Lego. In the end, Betz and his colleagues combined a gear rack with a gear worm screw, which enables users to adjust the focus. "While the objective holder is the smallest of all individual parts of the microscope, it is the most demanding with respect to building skills," the authors wrote. "Hence, building this part should either be done by older and more experienced children, or the building should be supervised by an adult to prevent frustration in an early phase of constructing the microscope."

Betz and his colleagues also designed a number of basic at-home experiments that users could perform with their Lego microscopes. For instance, one experiment involved studying a red onion monolayer, observing how an applied osmotic shock (the addition of a drop of NaCl solution) caused the onion layer to lose water and shrink. Another involved observing the formation of salt crystals, while a third involved observing how Artemia shrimp (microswimmers) move in water.

They tested their DIY instrument and experimental designs with the help of a group of children, aged 9 to 13 years, who built the microscopes and did some of the experiments, giving them sufficient freedom to also explore how magnification works on their own. The researchers monitored the children's progress throughout the process and then asked them to complete a questionnaire to evaluate how much they had learned. They found that the process significantly increased the children's understanding of microscopy.

All plans and instructions for the group's Lego microscope (including a step-by-step tutorial) are freely available in English, German, Dutch, and Spanish here. "We hope that this modular microscope will be used in classrooms and homes all over the world to excite and inspire children about science," said Betz. "We have shown that scientific research does not need to be separate from everyday life. It can be enlightening, educational and fun."