Future seems uncertain: Breathing life into the Corpse flower that smells like d...

source link: https://www.firstpost.com/tech/science/future-seems-uncertain-breathing-life-into-the-corpse-flower-that-smells-like-death-9221051.html
Go to the source link to view the article. You can view the picture content, updated content and better typesetting reading experience. If the link is broken, please click the button below to view the snapshot at that time.

Future seems uncertain: Breathing life into the Corpse flower that smells like death

Corpse flowers aren’t doing great in their native home of Sumatra, as they are dwindling because of deforestation for lumber and crops.

The alien-like blooms and putrid stench of Amorphophallus titanum, better known as the corpse flower, draw big crowds and media coverage to botanical gardens each year. In 2015, for instance, around 75,000 people visited the Chicago Botanic Garden to see one of their corpse flowers bloom. More than 300,000 people viewed it online.

But despite the corpse flower’s fame, its future is uncertain. The roughly 500 specimens that were living in botanical gardens and some university and private collections as of 2019 are deeply related — a lack of genetic diversity that can make them more vulnerable to a host of problems, such as disease or a changing climate. 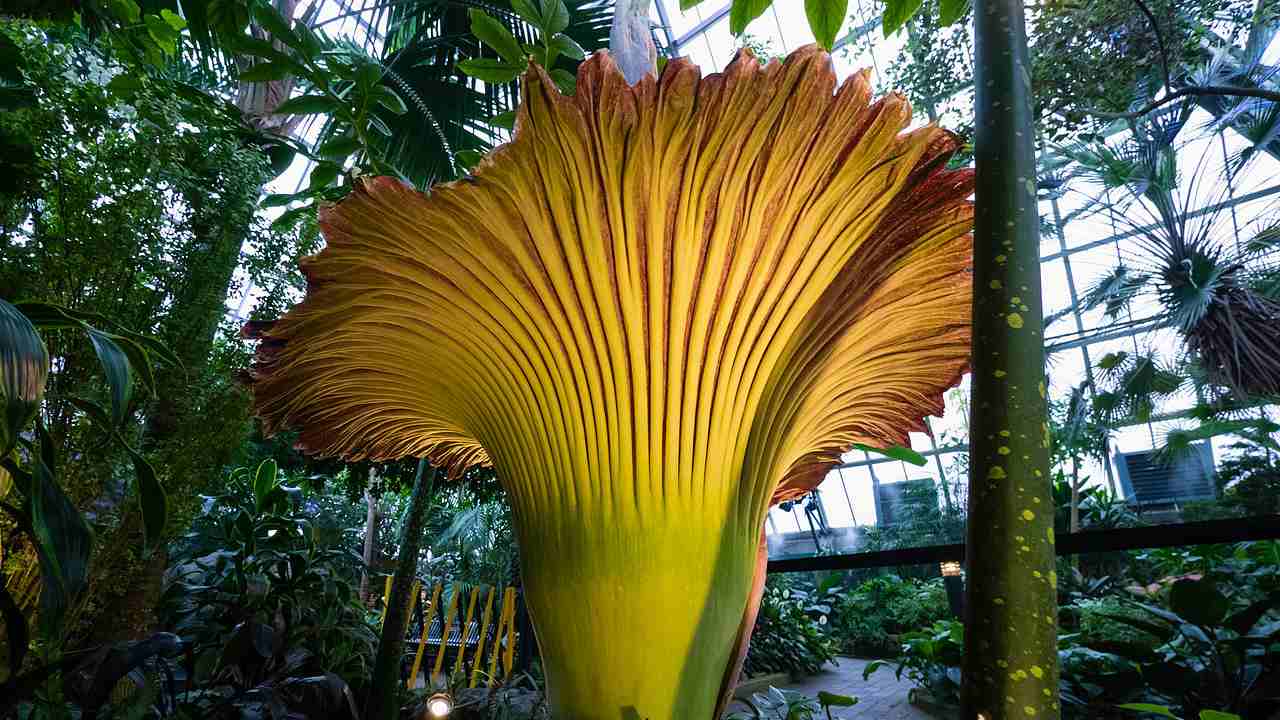 Corpse flowers aren’t doing much better in their native home of Sumatra, where they are dwindling because of deforestation for lumber and crops. In 2018, the International Union for Conservation of Nature (IUCN) listed the plant as endangered. There are fewer than 1,000 individuals still in the wild.

To combat the lack of genetic diversity in the corpse flower and six other species with shallow gene pools, the Chicago Botanic Garden spearheaded the Tools and Resources for Endangered and Exceptional Plant Species (TREES) program in 2019. The program will see widespread genetic testing across partnering botanic gardens, as The New York Times reported in December. This allows participants to create a database of the plants’ family trees, so to speak, to make more informed breeding choices and increase genetic diversity.

TREES could pave the way for future plant reintroductions into the wild, should any of the seven species continue to dwindle or come too close to extinction, says Jeremie Fant, a conservation scientist with the Chicago Botanic Garden, which leads the efforts for the corpse flower. However, some experts express concern about bringing genetics from foreign-grown plants into their native habitats.

The corpse flower is a tricky plant to preserve outside its native habitat. It blooms rarely and it has specific heat and humidity requirements to mimic its native habitat. Like many of the plants in the TREES program, the finicky flower also produces recalcitrant seeds, which can’t be easily stored because drying and freezing — the main way seeds are preserved — will kill them. Other plants in the program simply produce too few seeds to make seed banking a viable option.

While the Chicago Botanic Garden is taking charge of the corpse flower, the National Tropical Botanic Garden in Hawaii is heading the collecting and testing of two species: Hibiscus waimeae and the critically endangered Phyllostegia electra. There are two other botanic gardens heading up other species to tackle this widespread issue.

“We at botanic gardens have to work together to save some species,” Fant says. “Because we can't do it on our own.”

Currently, most plant conservation happens in seed banks, such as the International Potato Center in Peru and the International Institute of Tropical Agriculture in Nigeria. These banks of genetic information regularly freeze seeds for long-term research and use. In Arctic Norway, the Svalbard Global Seed Vault holds a backup collection of seeds from around the world in case local stores are compromised. But this doesn’t work for plants with recalcitrant seeds.

Usually, it is warm-climate plants — including the corpse flower — that produce these seeds, but there are exceptions, including oak. According to research out of Royal Botanic Gardens, Kew, in the United Kingdom, 36 percent of critically endangered plants have recalcitrant seeds. Many well-known crops also produce recalcitrant seeds, such as coconuts.

If a plant is socioeconomically important and produces recalcitrant seeds — like coconuts — conservationists will often create what are called “field gene banks,” according to Nigel Maxted, a professor of plant genetic conservation at the University of Birmingham, who isn’t part of the TREES program. These field gene banks have many of the same plants growing in the same area. They take up a lot of space, and the proximity of the plants to each other opens them up to other threats as well. “Disease could very easily go through the whole lot,” Maxted says.

As such, preserving plant species by spreading individual plants across many botanic gardens, or other collections, can be a useful bulwark against extinction, because it greatly decreases the likelihood that every single plant will die at once, says Susan Pell, deputy executive director of the United States Botanic Garden, a TREES participant.

But fostering genetic diversity in the botanic gardens can be difficult, especially with finicky and rare plants. Like many plants, corpse flowers can reproduce in different ways. Sometimes, they reproduce asexually: a tuber-like bulge at the base of their stem, called a corm, grows large and eventually splits, producing multiple genetically identical plants. While this has effectively grown the raw number of corpse flowers in botanic gardens, it has done little for the population’s genetic diversity.

Corpse flowers can also reproduce sexually, which requires pollination by insects — or, in botanic gardens, by humans wielding paintbrushes. There’s no set schedule for a corpse flower to bloom; each plant takes a variable number of years and blooms unpredictably based on conditions such as heat, light, humidity, and other factors.

To help breed on this unpredictable schedule, the Chicago Botanic Garden is creating a store of corpse flower pollen, which can be sent across the country when another specimen that isn’t closely related blooms. These targeted cross-pollination efforts could lead to more genetically robust offspring. While TREES has yet to lead to a crossing of corpse flowers, the Chicago Botanic Garden has used the methodology to strategically cross another plant called Brighamia insignis, also known as a cabbage-on-a-stick plant, which is critically endangered.

The TREES program is starting from a place of low genetic diversity for the corpse flower and its peers. Over the last 100 years, there have only been 20 documented collections of the plants from the wild for botanic gardens.

Sometimes, botanic gardens will get rare plant genetics from nurseries and private collections. For example, three of the US Botanic Garden’s corpse flowers were acquired as seeds from a plant grower in Hawaii. But, as collecting plants from the wild can be difficult and expensive, the botanic gardens will usually propagate the specimens and share the offspring with other collections. In the case of plants with low genetic diversity, this means an increase in raw numbers, but does little for genetic health.

“In terms of genetic diversity, it's hopeless,” Maxted says.

TREES may help, he adds. The program’s approach has been successfully deployed in the animal kingdom for a long time. For example, many zoos and conservation efforts create studbooks, or documents used to track the family trees of specific species. This tactic has been used to follow the lineages of myriad threatened species around the world, including the red panda.

“In general, all you're looking for is to maximize variation,” Maxted says.

While TREES could increase genetic diversity for domestic corpse flowers, some researchers aren’t sure the flower — and plants more generally — should necessarily be reintroduced into the wild. This is particularly true for plants in botanic gardens that are located far away from their native range.

There are two competing trains of thought, Pell says. The first is that only nearby plants should be reintroduced into an area. For the corpse flower, this could mean pulling from the Bogor Botanical Garden in Indonesia, which has a few specimens. The other supports the idea of putting foreign-grown plants back into nature and letting natural selection play out, even if it means that the foreign plants may thrive or outcompete their wild counterparts. (While TREES aims to make it possible to reintroduce the corpse flower into the wild, should conservationists decide it is necessary, so far there have not been any efforts to do so.)

Reintroduction can also take a lot of time, money, and effort, says Joyce Maschinski, director of plant conservation at San Diego Zoo Global and president and CEO of the Center for Plant Conservation. So can the long-term monitoring and care that the plants would need to thrive in the wild. Similarly, moving plants across borders can be difficult, and the laws surrounding it vary from country to country, although, she adds, moving pollen or seeds from botanic garden plants is likely easier.

Despite the challenges, conservation organizations and botanic gardens have gotten good at reintroducing plants, Maschinski says. The groups provide more monitoring, record-keeping, and caring for the plants after they are placed in the wild, including fencing off newly-planted areas and watering them.

For some plants, the approach may be the only hope. While there are concerns about reintroducing foreign-grown plants back into the wild, Maschinski adds, particularly rare species may otherwise go extinct.

If a future comes when reintroduction becomes a necessity, efforts like TREES could ensure a healthy and diverse population of corpse flowers and other endangered plants, Fant says. The researchers involved in TREES also say they hope that the methods could be rolled out to other species that could benefit, as the need arises. The program is already growing, and asking for samples from botanic gardens — including groups outside of the US like the Bogor Botanic Garden.

According to Maschinski, plants are primary producers in their natural habitats, and, as such, preserving some plant species can have a “cascade effect” on the environment — they feed bugs, which feed birds which feed animals, for instance. But according to Pell, the corpse flower’s role in its native habitat is relatively unknown. Whether or not it’s a keystone species, the corpse flower could still be a valuable ambassador, one that raises awareness of the plight faced by many other species, she says.

“I sort of think of the corpse flower as the panda of the plant world in a lot of ways,” she says. “It is just so fascinating and people are so taken in by it that it can be the kind of spokesperson for the importance of conserving all of our biodiversity, and certainly in the plant world.”

Even if the TREES program doesn’t lead to reintroduction in the wild, there’s value in protecting the corpse flower in botanic gardens, says Cyrille Claudel, a biologist at the University of Hamburg. It also might be easier to simply leave the plants alone in the wild, he says, rather than attempting to bring them back. Safeguarding captive corpse flowers would allow the curious to continue their research on the plants — or allow people to simply marvel at them.

The plant is also worth saving just for its own sake, Claudel adds: “It's probably just the coolest species on Earth, so I would very much like it to be preserved in nature, and cultivation.”

This article was originally published on Undark. Read the original article.