source link: http://www.mikechambers.com/blog/2008/01/17/commandproxy-net-air-integration-proof-of-concept/
Go to the source link to view the article. You can view the picture content, updated content and better typesetting reading experience. If the link is broken, please click the button below to view the snapshot at that time.

However, this does not mean that you cannot build an AIR application that has closer / tighter integration with the underlying operating system. This lower level of integration is possible, but it requires some work on your part. I have put together a proof of concept project, which shows how to integrate Adobe AIR applications with c# / .NET code on any operating system that Adobe AIR currently runs on (Mac and Windows). The project is called CommandProxy. It provides a communication proxy between an AIR application and the underlying operating system and could theoretically work with other web based desktop runtimes (such as Mozilla Prism).

Update : I have posted some additional thoughts on this proof of concept here.

Note, this project is in no way supported by Adobe. This is a proof of concept project that I put together to help developers understand one possible way to extend AIR functionality beyond that that is provided by the runtime.

The general concept behind the project is similar to the now defunct Artemis project (which is Java based). The AIR application communicates with the CommandProxy process to communicate and integrate with the underlying operating system. Currently the command proxy supports launching processes (and getting the output from the processes) as well as taking a screenshot of the user’s current screen. However, the framework is built in such a manner that it is possible to add new functionality to the proxy.

Here is an overview of the life-cycle of an AIR application using the command proxy. 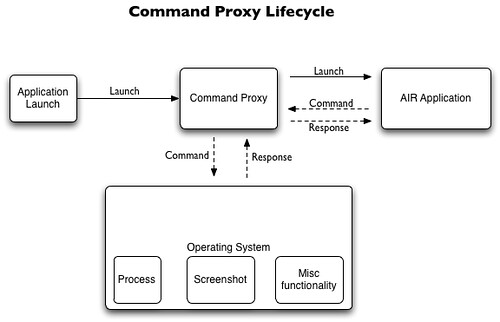 Currently, the project is meant as a proof of concept, and not as a general use framework. This mainly means that there is not a lot of documentation (although the code is fully commented) and if you want to use it, you are going to have to compile the proxy yourself. If there is interest, then I am willing to expand the project to other contributors.

If you wanted to use something like this in a production level application, then you would need to:

The project is hosted on Google code, and includes the following:

I am also hoping to post some examples of AIR apps that use the proxy. Lee Brimelow built a simple example of an AIR application that takes a screenshot, and then opens it in Photoshop for editing. You can see a demo of that example toward the end of the video posted here (it is about half way through the video).

Update : The code is released under an MIT License.

You can find more information on the CommandProxy project page.

Update : I have posted some additional thoughts on the code here.