How to Monitor Python Web Applications

source link: https://www.fullstackpython.com/blog/monitor-python-web-applications.html
Go to the source link to view the article. You can view the picture content, updated content and better typesetting reading experience. If the link is broken, please click the button below to view the snapshot at that time.

A quick way to check for errors and issues in your operational Python web application is to drop-in one of many awesome hosted monitoring tools.

Let's learn to quickly add Rollbar monitoring to a web app to visualize when our application is running properly and when it has issues. This tutorial will use Bottle as the example web framework along with Rollbar as the monitoring service but you can also check out the list of other tools on the monitoring page.

If you need help getting your development environment configured before running this code, take a look at this guide for setting up Python 3 and Bottle on Ubuntu 16.04 LTS.

All code in this blog post is available open source under the MIT license on GitHub under the monitor-python-bottle-apps directory of the blog-code-examples repository. Use and abuse the source code as you desire for your own applications.

Create a new virtual environment for this project using the following command. I recommend keeping a separate directory for virtualenvs under ~/Envs/ so you will know where all your project virtualenvs are located.

Activate the virtualenv with the activate shell script:

The command prompt will change after activating the virtualenv:

Remember that you need to activate your virtualenv in every new terminal window where you want to use the virtualenv to run the project.

We can now install Bottle and Rollbar into the activated virtualenv.

Look for output like the following to confirm the dependencies installed correctly.

We have our dependencies ready to go so now we can build our Python web application.

Create a folder for your project named monitor-python-apps. cd into the folder and then create a file named app.py with the following code.

The above application code has a few standard Bottle imports so we can create a Bottle web app and handle URL routes.

We have a single function, show_message, that handles a single Bottle URL route. show_message checks if the URL path contains only alphabetic characters and hyphens for a message to display. If the message passes the conditions then a page is rendered with that message in an h1 element. If msg does not pass the condition test then an exception is thrown that only alpha characters and hyphens are allowed.

Save app.py and we can run our code. Execute app.py using the python command as follows (make sure your virtualenv is still activated in the terminal where you are running this command):

The Bottle development server should start up and display a few lines of output.

Try to access a URL with a path that contains only alphabetic characters and hyphens, such as localhost:8080/hello-world/.

The application was successful in displaying "hello-world" but what if we try a URL that contains numbers in addition to the alphabetic characters, such as localhost:8080/fullstackpython123/?

An HTTP 500 error. That is surely not a good user experience.

The 500 error is obvious to us right now because we are testing the application locally during development. However, what happens when the app is deployed and a user gets the error in their own web browser? They will likely quit out of frustration and you will never know what happened unless you add some error tracking and application monitoring.

Time to modify our code to add Rollbar to report errors that occur.

Monitoring for Errors with Rollbar

Go to the Rollbar homepage in your browser to add their tool to our Bottle app. 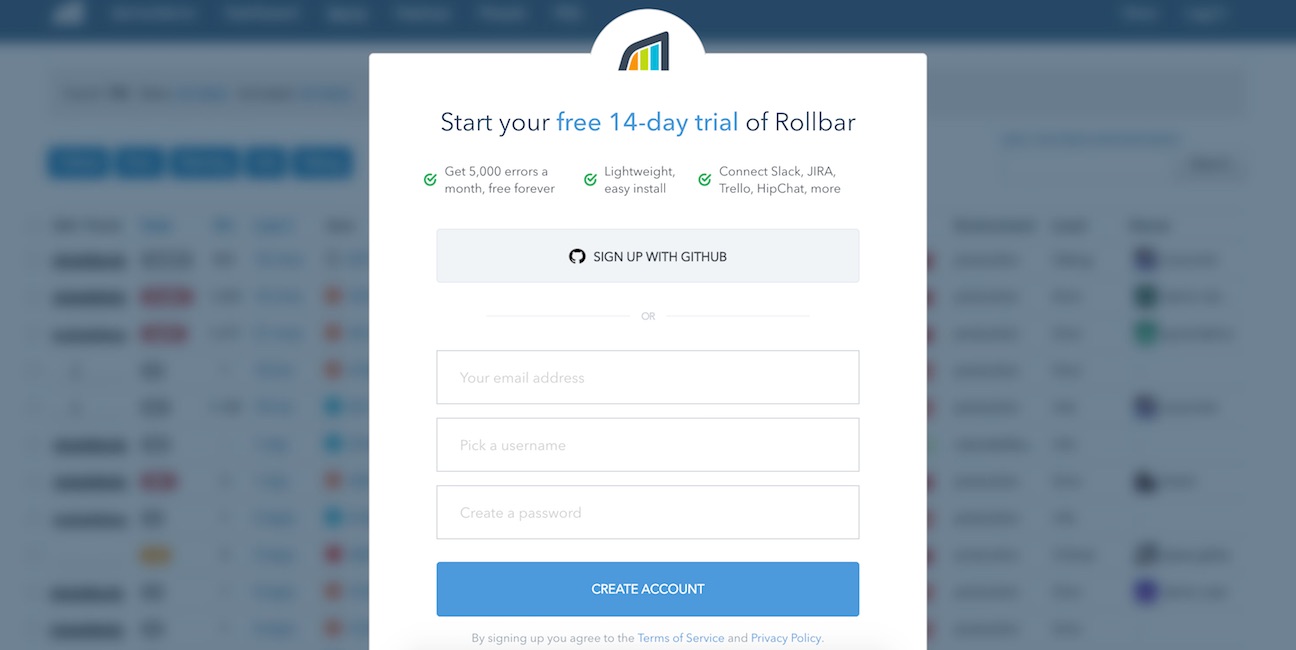 After the sign up page you will see the onboarding flow where you can enter a project name and select a programming language. For the project name type in "Full Stack Python" then select that you are monitoring a Python app. 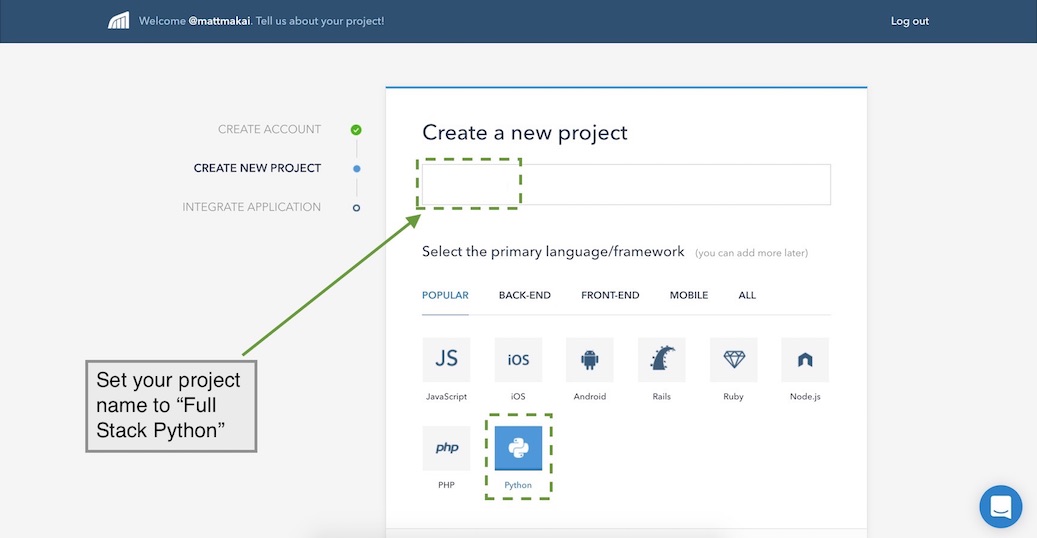 Press the "Continue" button at the bottom to move along. The next screen shows us a few instructions to add monitoring to a Python application.

Let's change our Bottle code to let Rollbar collect and aggregate the errors that pop up in our application. Modify app.py to include the following highlighted lines.

A new import from rollbar.contrib.bottle import RollbarBottleReporter is our conduit between the application and the Rollbar server. rollbar is the library we installed earlier.

The ROLLBAR_SECRET token needs to be set in an environment variable. Save and quit app.py. Run the following command in the terminal where your virtualenv is activated:

If you are uncertain about what your secret token is, it can be found on the Rollbar onboarding screen.

Note that I typically store all my environment variables in a .env file and use a template.env as a template for what I should fill into .env. .env can be invoked from the terminal using the . .env command. Make sure to never commit your secret tokens to a source control repository though, especially if the repository is public!

After exporting your ROLLBAR_SECRET key as an environment variable we can test that Rollbar is working as we run our application. Run it now using python:

Back in your web browser press the "Done! Go to Dashboard" button.

If an event hasn't been reported yet we'll see a waiting screen like this one:

Make sure your Bottle development server is running and try to go to localhost:8080/fullstackpython123/. A 500 server error is immediately reported on the dashboard:

We even get an email with the error (which can also be turned off if you don't want emails for every error): 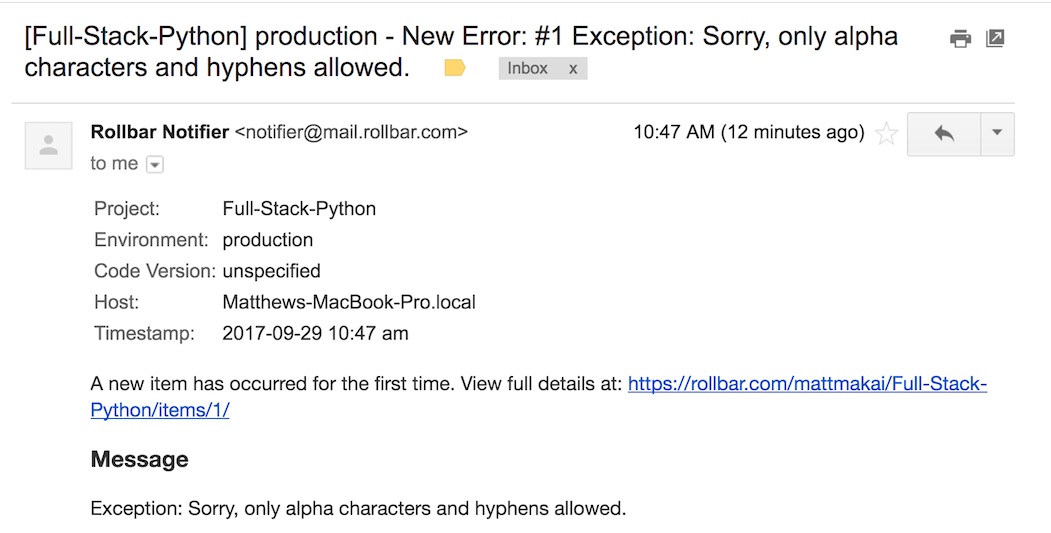 Nice, with just a few lines of code we now have our Bottle app reporting errors for any user that's working with our application.

We just learned how to catch and handle errors with Rollbar as a hosted monitoring platform in a simple example Bottle application. Next you will want to add monitoring to more complicated web apps, including ones that use Django or Flask. You can also try Rollbar's more advanced features to:

There is plenty more to learn about in the areas of web development and deployments so keep learning by reading about web frameworks. You can also learn more about integrating Rollbar with Python applications via their Python documentation.

Questions? Let me know via a GitHub issue ticket on the Full Stack Python repository, on Twitter @fullstackpython or @mattmakai.

Do you see a typo, syntax issue or just something that's confusing in this blog post? Fork this page's source on GitHub and submit a pull request with a fix or file an issue ticket on GitHub.