source link: https://www.businessinsider.com/pro-russian-officials-want-teenagers-voting-sham-referendums-occupied-ukraine-2022-9
Go to the source link to view the article. You can view the picture content, updated content and better typesetting reading experience. If the link is broken, please click the button below to view the snapshot at that time. 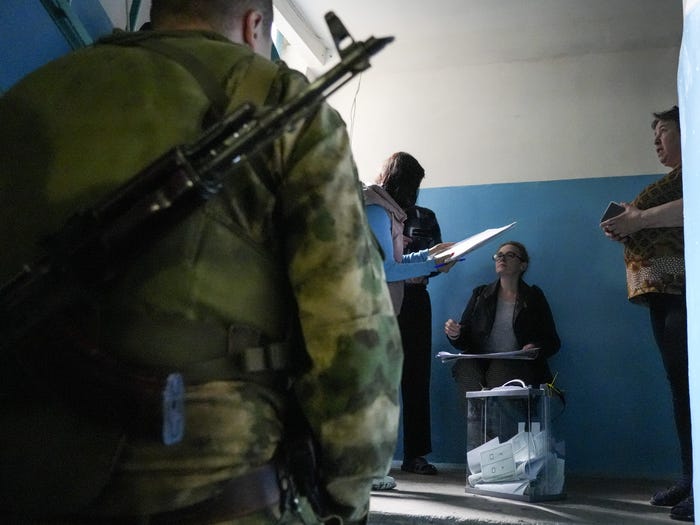 Residents cast their votes in controversial referendums in Donetsk Oblast, Ukraine on September 23, 2022. Photo by Stringer/Anadolu Agency via Getty Images

Pro-Russian officials holding illegitimate referendums in occupied Ukrainian territories are planning to encourage "minors" to vote so they can give the appearance of boosted participation, Ukraine's security service said.

Beginning on Friday and lasting through early next week, Moscow-backed separatists in four occupied regions in eastern and southern Ukraine — Donetsk, Luhansk, Kherson, and Zaporizhzhia — are holding referendums on joining Russia.

In eastern Ukraine's occupied Donetsk region, pro-Russian officials plan to include teenagers ages 13 through 17 in the voting process of the "sham referendum," Ukraine's security service — or SBU — shared in a Thursday statement. Citing intercepted documents, the SBU said "minors" will be accompanied by their parents, guardians, or orphanage representatives to polling stations.

The SBU said doing so will allow Russian proxies to build a more widespread voter base and "strengthen control" of the referendum's turnout.

"At the expense of minor 'voters,' the occupiers are trying to artificially increase the catastrophic lack of 'votes' in order to legitimize the fake [referendum]," the SBU said, adding that Russian proxies plan to involve families who registered to vote in Donetsk but now live in Russia so they can "rig the results."

As voting got underway on Friday, Russian soldiers and their proxies stood guard around election workers as Ukrainians voted and even showed up at people's homes, according to a report from the New York Times. One CNN report said some residents have ignored the call to vote, while others were forced to cast their ballots.

Ukrainian and Western officials have widely slammed the referendums as illegal and said the outcomes of any votes will never be recognized.

"Sham referendums have no legitimacy & do not change the nature of #Russia's war of aggression against #Ukraine. This is a further escalation in Putin's war," NATO Secretary General Jens Stoltenberg said earlier this week.

During an address to the United Nations General Assembly on Wednesday, President Joe Biden said the "sham referendum to try to annex parts of Ukraine" is an "extremely significant violation of the UN charter."

Britain's defense ministry shared in an intelligence update that the votes are "likely driven by fears of imminent Ukrainian attack and an expectation of greater security after formally becoming part of Russia."

The announcement of the referendums earlier this week came after several weeks of Ukrainian advances along the war's eastern and southern fronts, including a punishing counteroffensive in the northeastern Kharkiv region, which has seen the eastern European country liberate thousands of square miles of territory that was previously under Russian occupation.

In response to the battlefield setbacks, Russian President Vladimir Putin on Wednesday announced the partial military mobilization of his country's reservists — a move that Western officials and war researchers have said will likely not have any tangible impact on the seven-month-long conflict for months.