Call of Duty Modern Warfare 2 beta: sign up to play the FPS

source link: https://www.techradar.com/how-to/sign-up-for-the-call-of-duty-modern-warfare-2-beta
Go to the source link to view the article. You can view the picture content, updated content and better typesetting reading experience. If the link is broken, please click the button below to view the snapshot at that time.

Call of Duty Modern Warfare 2 beta: sign up to play the FPS 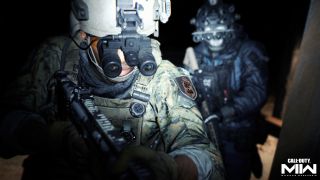 To say players are anticipating the release of Call of Duty: Modern Warfare 2 is an understatement. With the game scheduled to release on PS5 and PS4, as well as  Xbox Series X|S, Xbox One, and PC, it looks like just about everyone will be able to get in on the pulse-pounding military action. With the full release set for 28 October 2022, there are still a few more months to go before we can get our hands on the latest incarnation of Infinity Ward's much-beloved shooter.

If you want to see for yourself how it's shaping up, the developer is now accepting sign-ups for the Call of Duty: Modern Warfare 2 beta and we've collected all of the details. Read on, and you'll learn everything you need to know about the beta, as well as how to sign up. Time to lock and load.

Call of Duty Modern Warfare 2 beta: all the details

For those who don't know, a beta is an opportunity for players to play an earlier version of the game before release in order to help developers make tweaks to their production.

This beta is due to come in two flavors: the early access and the open. The early access beta is available to anyone who preorders the game, and starts two days before the open beta, lasting four days in total. Conversely, anyone can sign up for the open beta, regardless of whether or not they've pre-ordered. However, you'll only get two days with the game.

The beta is due to be divided into two weekends. Unfortunately, it looks like Call of Duty Modern Warfare 2 beta dates are disappointing for Xbox players, since the first weekend is set to be PlayStation exclusive. That first beta weekend will start on 16–17 September with the pre-order early access phase, while the PlayStation-exclusive open beta will begin on 18–20 September.

The second beta weekend, which will be available across all major consoles, will start with the pre-order early access phase on 22–23 September and then open up to everyone on 24–26 September.

Call of Duty Modern Warfare 2 beta: how to sign up

You can get into the Call of Duty Modern: Warfare 2 beta early by opting to pre-order the game on PS5, PS4, Xbox Series X|S, Xbox One, Battle.net, or Steam.

If you're old-school and pre-ordered from a brick-and-mortar store, there should be a beta code on your receipt.  You'll need to take your code and head over to the beta signup page on the Call of Duty website. (opens in new tab) Log in with the details of your preferred gaming account and enter the code.

Once the beta starts, you'll find an e-mail in your inbox to confirm your entry and give you any further details. If you bought a physical copy, you'll also receive an email, so long as you registered your code on the Call of Duty website.

Though the open beta is available to anyone, by pre-ordering and signing up, you'll have access to the beta two days early. Though progress in the test will not carry over into the main release, GamesRadar (opens in new tab)has reported that those who participate in the beta will be able to unlock rewards at launch.

With the beta on the horizon, and Warzone 2 due to hit later this year, FPS fans have a lot to be excited for. This will be players' first taste of action this year, so make sure you're part of it, be it in the early phases or later on. Best of luck out there, and stay frosty.