source link: https://finance.yahoo.com/news/netflix-lays-off-another-300-employees-amid-sagging-stock-price-slower-revenue-growth-170455996.html
Go to the source link to view the article. You can view the picture content, updated content and better typesetting reading experience. If the link is broken, please click the button below to view the snapshot at that time.

Netflix to lay off 300 workers, BofA slashes price target on the stock
SEANA SMITH: All right,
well, a double dose 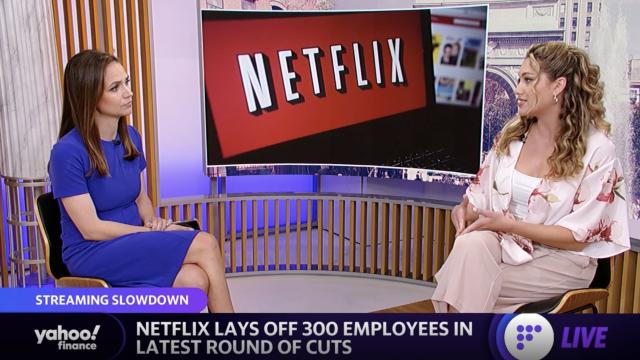 Netflix (NFLX) just issued another round of job cuts.

"Today we sadly let go of around 300 employees," a Netflix spokesperson said in a statement.

"While we continue to invest significantly in the business, we made these adjustments so that our costs are growing in line with our slower revenue growth. We are so grateful for everything they have done for Netflix and are working hard to support them through this difficult transition," the spokesperson continues.

The job cuts follow Netflix's last round of layoffs in May when the streamer laid off 150 members of its workforce. In recent weeks, a number of technology companies and venture capital–backed firms have announced plans to either freeze hiring, rescind accepted offers, or lay off employees.

Netflix stock, currently trading at around $170 a share, has plummeted more than 70% year-to-date amid a broader market sell-off that's slammed growth stocks and fueled talk of a potential recession.

For context, Netflix’s share price peaked above $690 (market cap of over $300 billion) in November 2021, before credit card data showed a slowdown in customer additions.

The company announced an unexpected first-quarter subscriber loss of 200,000 users in April. It expects to lose another 2 million subs in the current quarter.

On Thursday, Bank of America slashed its price target on the stock, lowering it from $240 a share to $196.

The big bank noted that streaming is now saturated and commoditized, adding that "Netflix as a 'must-have service' [is] becoming more of a curse than a blessing, with several indicators that future subscriber growth for Netflix is going to have to come from outside the United States."

The plummet in net subscriber additions seems to have surprised even Netflix, especially after the platform enjoyed an intense pull-forward effect during the pandemic that brought in 37 million subscribers in 2020.