macOS 13 Ventura vs Monterey: Should you update this fall?

source link: https://www.macworld.com/article/783546/macos-13-vs-macos-12.html
Go to the source link to view the article. You can view the picture content, updated content and better typesetting reading experience. If the link is broken, please click the button below to view the snapshot at that time.

macOS 13 Ventura vs Monterey: Should you update this fall?

Apple's revealed what's coming in macOS Ventura, but how does it differ to macOS Monterey?
By Martyn Casserly
Contributor, Macworld Jun 14, 2022 9:16 am PDT 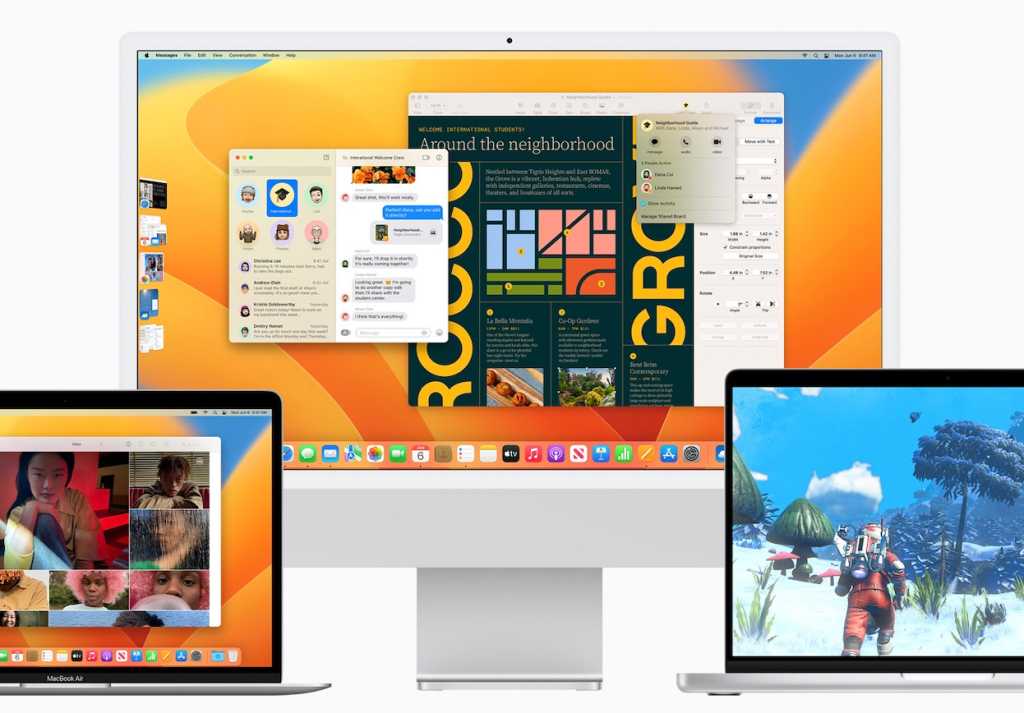 Apple’s next version of macOS – which we now know will be called Ventura – will launch later this year, but we already know a lot about Ventura and its new features after Apple revealed all at WWDC 2022 in June. Beta testers are able to run Ventura now, but the rest of us will have to wait until the fall. The question is, will there be enough improvements to tempt you to upgrade from Monterey to Ventura?

In this article we will run through how Ventura compares to Monterey and we will discuss the new features it will bring to your Mac. Before you get too excited about the new features coming in Ventura, a warning: Your Mac may not be able to run Ventura at all, or it may only be compatible with some of the features. See: macOS 13 Ventura compatibility and Ventura features that only work on new Macs.

macOS has been going through some serious revisions over the past few generations. Big Sur brought a redesigned interface, introducing new features like Control Center and the revamped Notification Center. This was built upon in macOS Monterey by the addition of new features in FaceTime such as Voice Isolation for improved sound and SharePlay to enjoy content with others on the call. Monterey also brought Continuity tools like AirPlay to Mac, which allowed other Apple devices to display on the larger screen. The headline feature – Universal Control – didn’t actually arrive until March 2022, now it’s here you can share a mouse and keyboard between Macs and iPads.

There are lots of new features coming in macOS Ventura, that move beyond what we gained in Monterey and refine and improve some features that we have enjoyed for years. As usual a lot of what the new version of macOS brings is better integration with your iOS and iPadOS devices, but there are some new features that only Mac users will enjoy.

Here are the main ways macOS Ventura is different than macOS Monterey:

One of the new design changes highlighted at WWDC is Stage Manager. This is intended to make it easier to move between the multiple apps we have open on our desktops. Think of it as an evolution of Spaces and Exposé – two useful features that have been on our Macs for a long, long time. If you use Stage Manager clusters of apps and window can be displayed to the left of your screen, so you can group together things you are working on, rather than cluttering your screen with everything you have open in a day.

To the left of the app you’re working on you’ll see the various other open apps. If you have multiple windows for any of them, then those will be stacked together to keep things simple. Clicking on anything in the left column will immediately bring it to the fore to replace the one that you were working on, which is then added to the Stage Manager area. 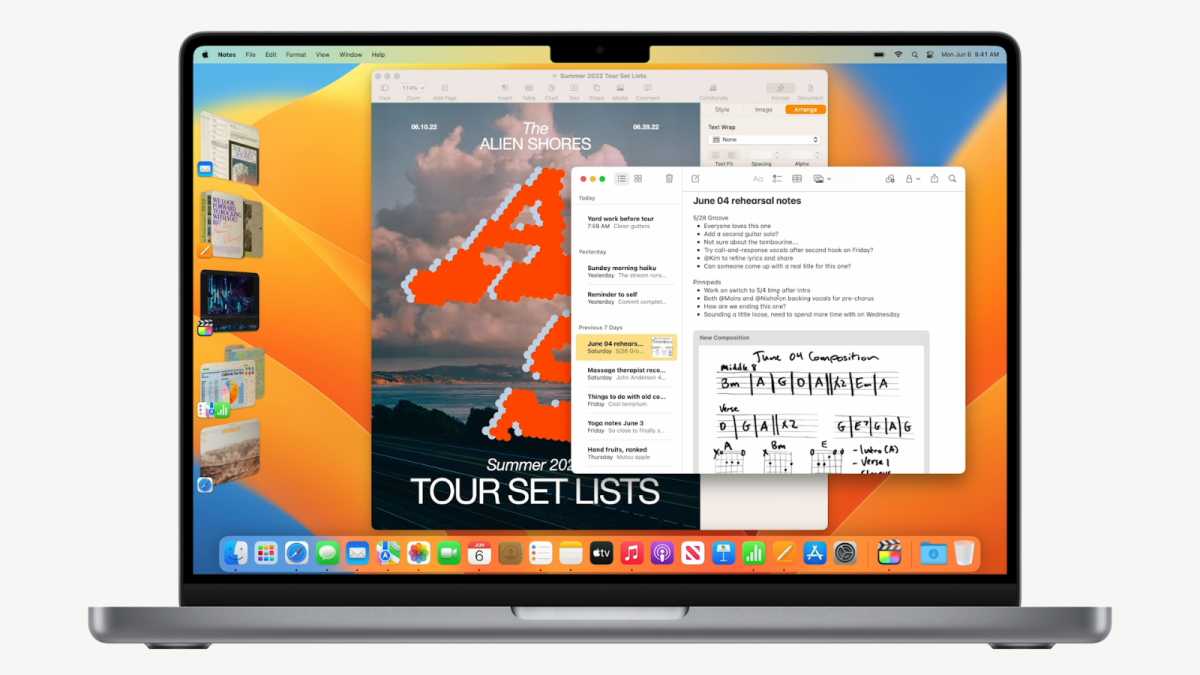 Of course, you can do a lot of this on macOS Monterey (and several previous versions) via Spaces, which creates individual desktops where you can keep apps apart, cutting down on clutter. So, if you already work that way, then Stage Manager might not be that much of a step forward.

Spotlight is already a powerful way to search for apps, files, and other content on macOS Monterey. In macOS Ventura, Apple is improving Spotlight so it integrates better with the other Apple devices you own. For example, you’ll be able to easily find photos from your iCloud Photo Library as well as on your hard drive or the web. Need a picture of a lighthouse? Type it into Spotlight and you should be presented with plenty of images because of the way Spotlight uses Machine Learning to recognise the content of images. Spotlight in Ventura will also support the Live Text feature that was added in iOS 15, and will allow you to interact with the text in those images, which is pretty cool.

Apple has also beefed up the results pane, making it bigger, so you can get richer search results with more information about the subjects in question. You can also start timers from Spotlight too, which may be quite useful if you’re always fumbling around to find the Clock app on your iPhone since your Mac can’t set timers and alarms.

Mail is one of the core apps that lags behind many third-party alternatives (see: Best email app for Mac). This should change in macOS Ventura, with Apple finally introducing some features that have been available in other offerings for quite a while. 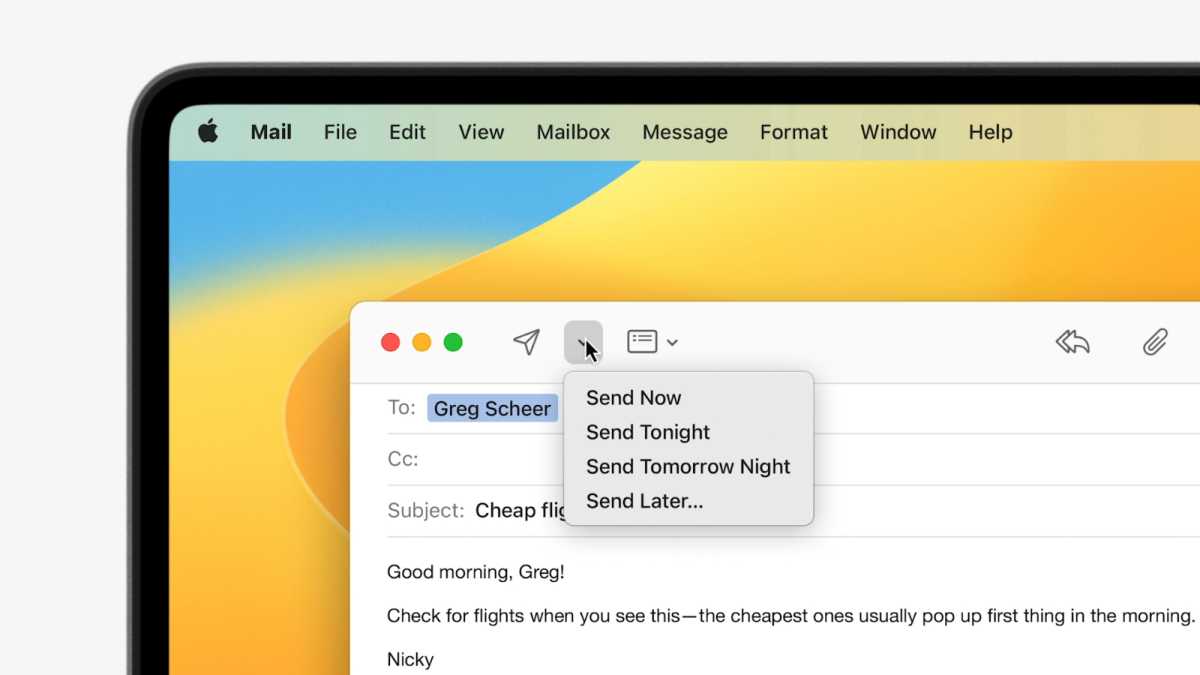 These include the ability to Undo Send, which recalls any emails you may have sent in error. You’ll also be able to schedule emails so they go at specific times, plus Mail will monitor your sent messages and remind you if one hasn’t received a response yet so you can chase them up. There are also improvements to search, with more detailed results and clever software tweaks that help it find what you’re looking for even if the search term isn’t spelled correctly.

In macOS Monterey, we saw the introduction of Tab Groups, which allows users to create a group of tabs that can be accessed separately to the normal ones you may open. This means you can create collections for certain things, like your news first thing in the morning, shopping for certain products, or gathering information for a project.

Now, in macOS Ventura, you’ll be able to take this a little further with the new Shared Tab Groups. This acts in a similar way, but allows you to share the Tab Groups with other people who can also add their own tabs to the collection. This could be very handy when planning trips together, working collaboratively on projects, or just making each other laugh with funny things you find online.

Privacy is always a concern online and macOS Ventura takes this on via a new feature called Passkeys. These are essentially locally generated alternatives to passwords for sites and apps, using Touch ID or Face ID for authentication. The best part is that the information never leaves your Mac, so it can’t be stolen from company web servers or phished in emails sent to you. It’s early days, but Apple’s aim is to do away with passwords altogether, and that is fine with us. 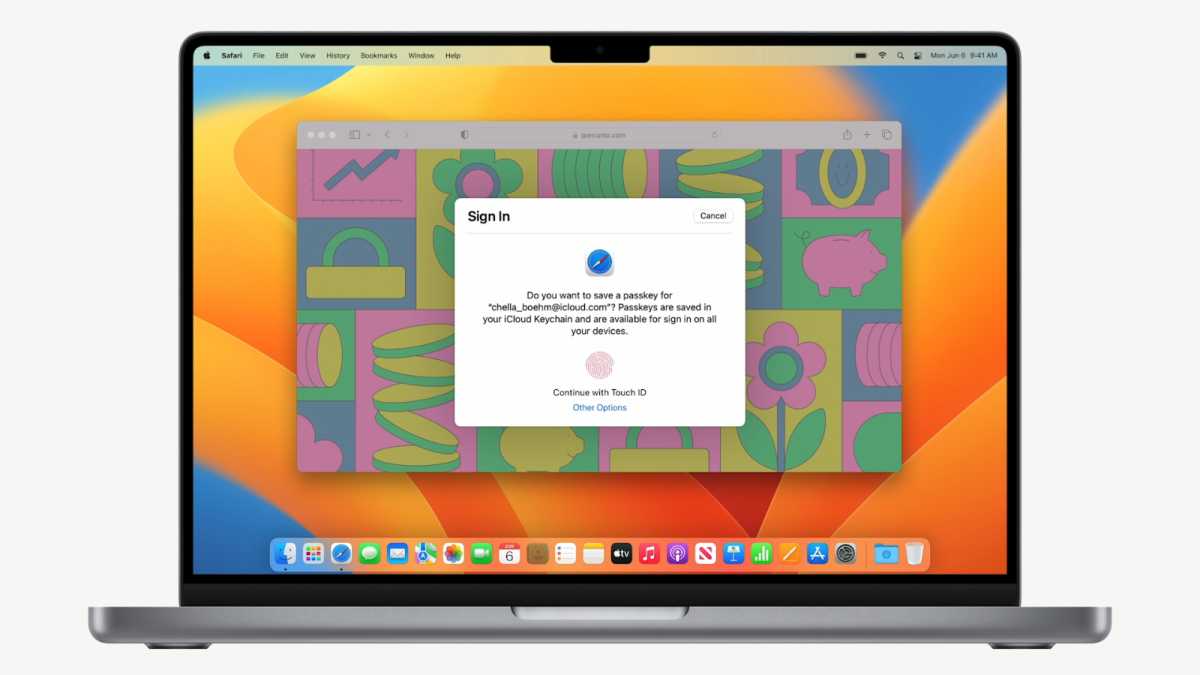 One of the stand-out features of macOS Monterey was Universal Control, which lets you use your keyboard, trackpad or mouse interchangeably on iPads and Macs, with the added advantage of dragging content between the two. This is all achieved via Continuity and Handoff. In macOS Ventura, Apple continues to make use of these technical abilities with a new feature called Continuity Camera. This instantly turns your iPhone into a webcam for your Mac. It’s well documented that Mac webcams are somewhat underwhelming, so being able to use the far superior rear cameras on your iPhone makes perfect sense. 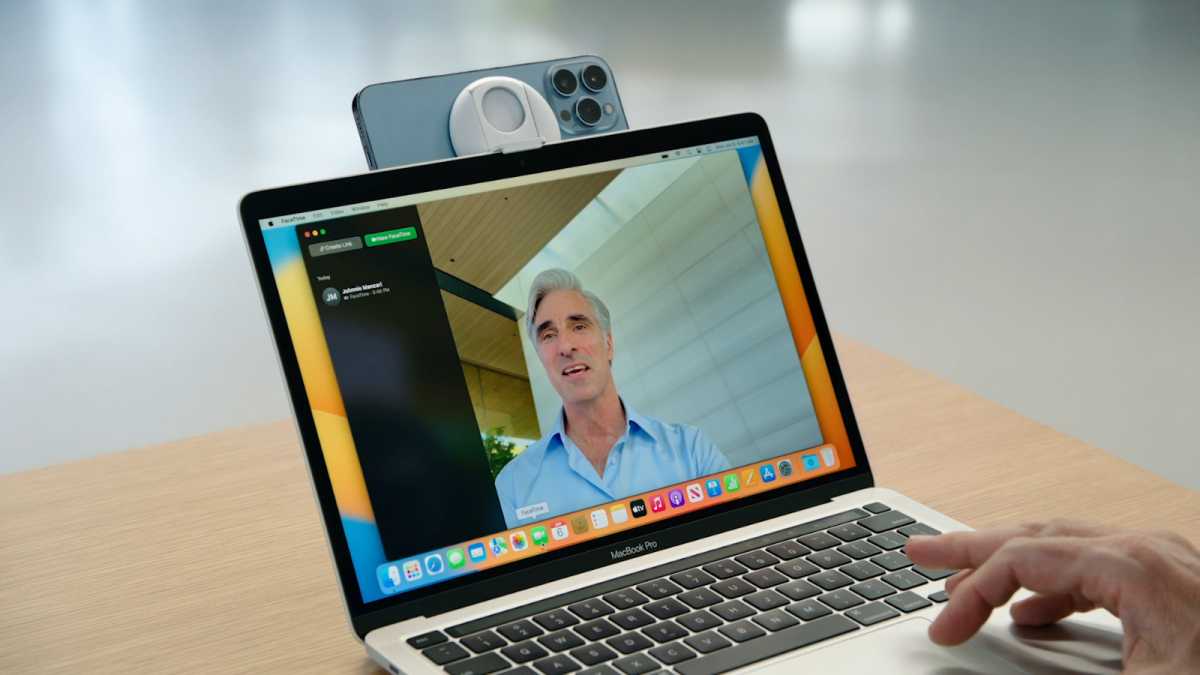 It supports Center Stage and Portrait Lighting, and if your iPhone has an Ultra-Wide camera then it can also split the view between you and the contents of your desk. Very clever.

Handoff also makes it easy to switch between FaceTime calls on your Mac, iPhone or iPad in Ventura as well, so you can take the call on your iPhone while walking to your desk, then switch it from your iPhone to the Mac.

See: What is Continuity Camera and how to use it for more information.

Should I upgrade to macOS Ventura?

Alongside all these changes above, Apple also announced that macOS Ventura will feature improved gaming ability via Metal 3, updates to Notes, Dictation, Home, Reminders, Apple News, Weather, and even the Clock app. All of this will make macOS Ventura a worthy successor to macOS Monterey.

Just bear in mind that Apple has announced that several Macs will not make the cut when it comes to the upgrade, so check out our guide to the Macs that will get macOS Ventura to see if your device will be eligible. If so, and you don’t want to wait until later this year to try out the new features, you can always read our how to install macOS Ventura beta guide.