source link: https://www.businessinsider.com/putin-is-seriously-ill-according-trump-pee-tape-spys-sources-2022-5
Go to the source link to view the article. You can view the picture content, updated content and better typesetting reading experience. If the link is broken, please click the button below to view the snapshot at that time. 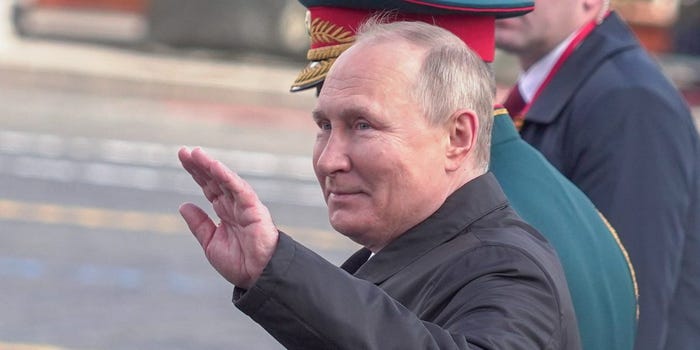 Sign up for our weekday newsletter, packed with original analysis, news, and trends — delivered right to your inbox.
Email address
By clicking ‘Sign up’, you agree to receive marketing emails from Insider as well as other partner offers and accept our Terms of Service and Privacy Policy.

Christopher Steele, who led MI6's Russia desk and worked as a spy in Moscow for years, told Sky News: "Certainly, from what we're hearing from sources in Russia and elsewhere, is that Putin is, in fact, quite seriously ill."

Claims about the 69-year-old leader's health have circulated for months. On Saturday, Ukraine's head of military intelligence, Major General Kyrylo Budanov told Sky that Putin is in "a very bad psychological and physical condition and he is very sick."

Budanov went on to suggest that the purported illness has incited plans within Russia for a coup.

In his interview with Sky, Steele suggested that Putin's health is "an element" in his decision-making in Ukraine.

"It's not clear exactly what this illness is — whether it's incurable or terminal, or whatever," he said. "But certainly, I think it's part of the equation."

These claims come days after New Lines Magazine published the claims of an anonymous Russian oligarch who said that Putin is "very ill with blood cancer." New Lines said it verified the identity of the oligarch, but was unable to authenticate the recording.

It is all but impossible to confirm rumors about Putin's health, which describe a panoply of ailments: Russian investigative news outlet Proekt wrote in early April that the leader has received dozens of visits from a thyroid cancer specialist.

Meanwhile, former KGB agent Boris Karpichkov told The Sun newspaper, without citing sources, that "there is a serious concern" Putin is suffering from dementia and Parkinson's disease, among other ailments.

The Sun's report follows weeks of tabloid speculation over the leader's bloated face and images of him appearing to steady himself while seated in an April meeting with his Defense Minister Sergei Shoigu.

Steele is the author of an intelligence dossier that made multiple claims about Trump, including the existence of the "pee tape" — a Russian videotape supposedly of obscene material involving Trump before his political career.

No evidence of the "pee tape" has been found, and other aspects of the report's credibility have been questioned, as CNN reported.

Steele worked under diplomatic cover as a spy in Moscow for three years in the 90s, and between 2006 and 2009 was chief of MI6's Russia desk.