source link: https://www.semrush.com/blog/olympics-2020-digital-perspective/
Go to the source link to view the article. You can view the picture content, updated content and better typesetting reading experience. If the link is broken, please click the button below to view the snapshot at that time.

As the Olympics season is now over, it’s time to draw some conclusions.

This year, Tokyo hosted some of the most challenging Olympic Games to date. The pandemic reshuffled a lot of cards for one of the most anticipated events in sports. The 2020 Olympics actually took place in 2021, without a live audience, a lot of internal controversies, and the lowest TV ratings since 1988.

Considering traditional media, this Olympics season has been nothing but a historic low, so we’ve decided to see how things went from a digital perspective.

Here are some overall stats across the official social media accounts for Tokyo 2020:

Audience Sentiment Towards the Games

The Tokyo Olympics (#Tokyo2020) had 136k mentions on Twitter over July and August 2021. Curiously, Rio was also mentioned more than 44,000 times, implying that this year’s Summer Olympics were heavily compared to those of 2016.

For those days, the majority of tweets came with a neutral sentiment, with less than 3% expressing negative feelings. But the opening ceremony triggered 4% more positive tweets than the closing one, which could indicate that interest in the Olympics slightly declined over the course of the Games.

While the general sentiment was quite neutral, social media analysis shows that the skepticism towards running the Summer Olympics in the middle of the pandemic was also expressed across social media.

The most popular Olympics-related tweet on the date of the opening ceremony featured a sarcastic image of Tokyo 2020’s mascots: 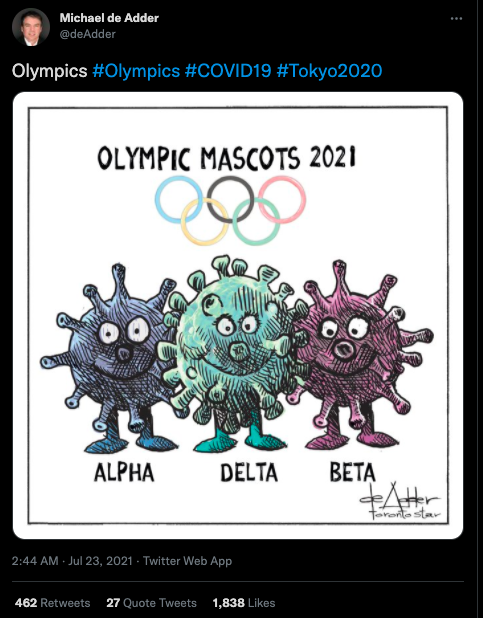 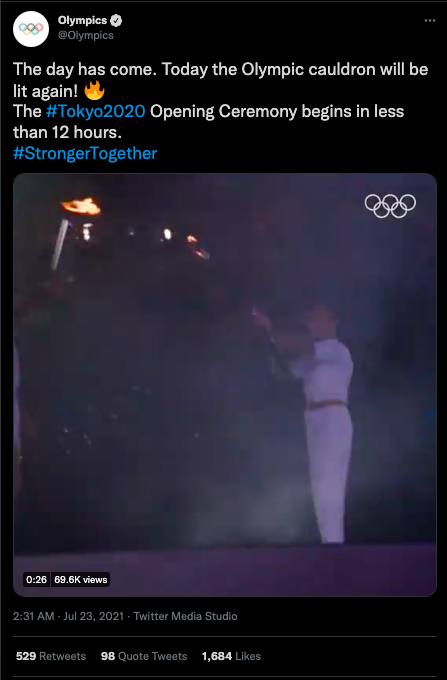 Sports That Saw a Popularity Spike During the 2020 Olympics

To uncover which sports witnessed sudden popularity, we checked search volumes for all the sports featured in the Olympics, starting from August 2017 to July 2021. This gave us a good idea about the search/interest trends for each sports type.

While it’s typically not easy to attribute search volume surges directly to the Olympics, some sports do allow us to pinpoint the connection.

We’ve found the disciplines that saw peaking search volume counts in July 2021 and also added MoM (June 2021 vs. July 2021) search interest changes into the mix — all to see which sports potentially owe their skyrocketing popularity to the Tokyo 2020 Olympics. They are all listed in the table below:

As for the sports that were only added to the Olympics this summer — skateboarding, karate, sport climbing, surfing, and softball/baseball — the last three also saw July 2021 as the top month in regard to audience interest.

Olympic Disciplines That Saw a Declining Interest Trend During the Olympics

With June holding a lot of the big-name sporting events like Euro 2020, Roland Garros, and a part of the Wimbledon series, some sports like football, tennis, and boxing saw declining search interest numbers during the Olympics season. All three disciplines saw their search volumes go down by 18% MoM.

Which Athletes Stole the Show and Got the Biggest Online Traction?

Although interest in tennis as a discipline didn’t spike during the Olympics, the same cannot be said about tennis players.

Below, you can see a list of the top 20 most searched golden medalists. We also looked at their audience size across Twitter and Facebook during the period of the Games — all to see whether golden medals translate directly into more followers.

When it comes to the most-tweeted-about Tokyo 2020 athletes, the top 10 most popular list doesn’t only feature gold or silver medalists.

Novak Djokovic, Naomi Osaka, Tadej Pogacar, and Andy Murray — some of the top players in their sports niches — didn’t get the top medals at the Summer Olympics but still received some incredible attention from the Twitter crowd.

Naomi Osaka’s withdrawal from the French Open due to mental health issues, Novak Djokovic’s top titles during Wimbledon and the French Open, Tadej Pogacar’s victory at the Tour de France, and Andy Murray’s misfortunes during this year’s tennis season kept the social media audience’s curiosity high despite their not-so-bright performance during the Games.

The Olympics are not simply a big deal for the Olympics committee, athletes, sponsors, and the general sports-loving crowd. Brands, and especially sporting brands, watch out for the Olympics season, trying to anticipate the next shift in consumer demand.

We could expect large sports events to trigger higher interest in sports-related goods.

To see if that’s indeed the case, we’ve analyzed the top Amazon searches for all things sports and decided to identify some of the most striking growth trends that could potentially be linked back to the Olympics.

Having analyzed over 6K Amazon searches for any sports-related goods in July 2021, we’ve spotted that searches to the top 100 most popular sports products grew by a whopping 900%.

And out of the 6K analyzed products, almost 31% saw peaking search numbers in July 2021 (compared to all the monthly searches starting in January 2021). The largest increase in search demand was shown by products for tennis, golf, swimming, gymnastics and volleyball: in July and August their Amazon search volume increased sometimes by 1,000% or higher.

Wrapping Up the Tokyo 2020 Olympics

Now that everyone has reported on the aftermath of the 2020 Summer Games in regard to viewership, ratings, advertising dollars, and more, we hope that our brief digital impact analysis also adds to the overall picture.

As much as the 2020 Olympics have been overwhelmed with all kinds of challenges and unexpected turning points, we can see that despite a lower interest and a lot of controversies, they still had an impact on the digital landscape — bringing in more traction to social media, the athletes, various sports, and even sports-related products.