source link: https://www.theverge.com/2021/9/2/22654534/streamers-twitch-walkout-viewership-drop
Go to the source link to view the article. You can view the picture content, updated content and better typesetting reading experience. If the link is broken, please click the button below to view the snapshot at that time.

It seems as if the Twitch walkout was a success

Streamers took a day off Twitch on September 1st to bring attention to the persistent hate raids that have plagued the platform in the past weeks. While skeptics panned the idea, suggesting that the walkout participants weren’t influential enough to effect significant traffic changes, according to data compiled by Gamesight, a gaming analytics company, Twitch did see a drop in viewership. 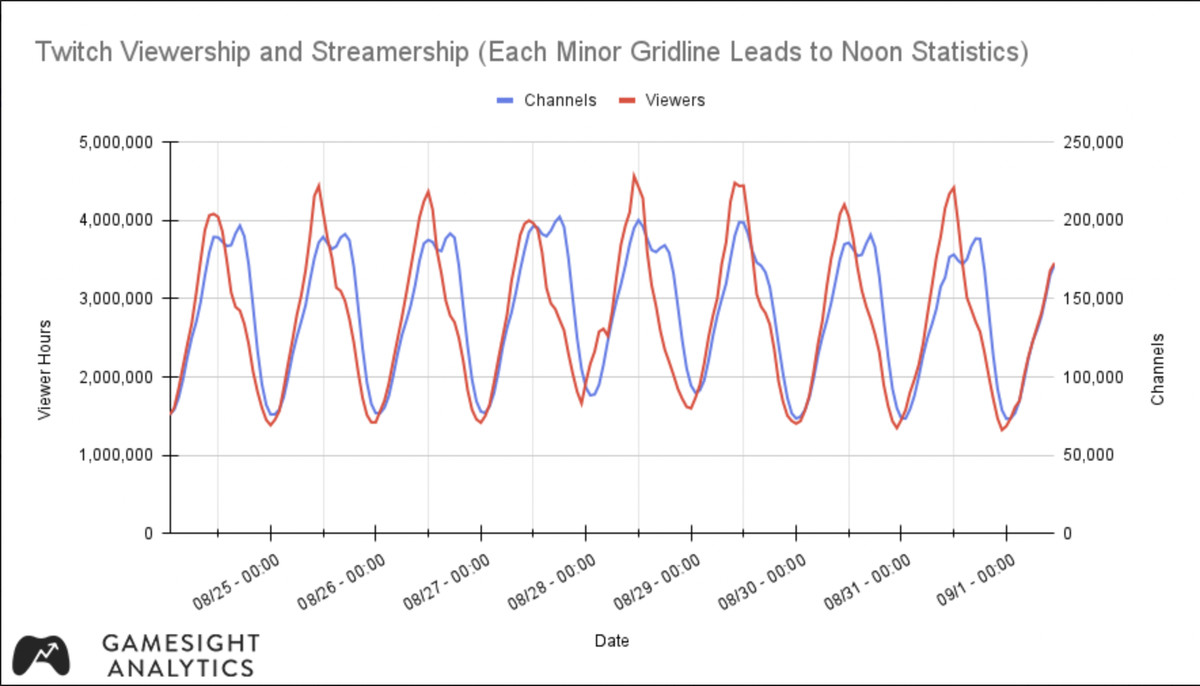 Looking at the raw numbers, it’s easy to see the dip. If you compare September 1st’s data with the Wednesday previous, that day had almost 1 million fewer hours watched and over 14,000 fewer live channels than just the week before.

But there are additional factors that could have contributed to the dip. DrLupo and TimTheTatman — both popular streamers — announced they were leaving Twitch for exclusive streaming deals with YouTube Gaming. Schools in the US are back in session, and Gamescom likely inflated last week’s numbers. Another streamer data analytics team, CreatorHype, took all of those parameters into account and still reported that Twitch’s viewership was down.

“Based on the data, #ADayOffTwitch impacted both the number of streamers and the viewership on the platform,” Zach Bussey of CreatorHype writes. “Depending on how you qualify that data, the impact might have been as low as 5 percent or potentially as high as 15 percent.”

The hashtag #ADayOffTwitch was one of the top 10 trending hashtags for the day — a feat considering the news cycle consisted of Hurricane Ida battering New York, Joe Rogan’s COVID-19 diagnosis, and the Texas abortion battle. The event also garnered attention from big-time streamers like Hasan Abi and press outlets like Forbes and USA Today.

Twitch is currently working on the hate raid problem, but there isn’t yet a timeline for when solutions will be available. In the meantime, streamers and third-party companies have created their own tools to fight back. Streamlabs, makers of some of the most popular stream management tools, used the day to announce it created Safe Mode — a free program that can essentially stop a hate raid in progress.

Data aside, the streamers responsible for creating and organizing the walkout feel good about what they’ve done. “To see how much this has made an impact is amazing to me,” says ShineyPen, the streamer who started #ADayOffTwitch.

The walkout was designed to bring greater attention to the harassment disproportionately suffered by marginalized streamers and to agitate for proactive protections from Twitch. It seems, at least in part, that they’ve accomplished their goals.

“It was honestly just amazing to witness,” says RekitRaven, creator of the #TwitchDoBetter movement. “It felt like an awesome moment, especially when there were so many who doubted (and still doubt) what we’re trying to do in this space.”

The organizers also know that one day of protest isn’t enough.

“While we may not have hit Twitch in a significant way in terms of financial impact,” says Lucia Everblack, another walkout organizer. “Our absence was absolutely felt.”