source link: https://blog.knoldus.com/circuit-breaker-with-resilience4j/
Go to the source link to view the article. You can view the picture content, updated content and better typesetting reading experience. If the link is broken, please click the button below to view the snapshot at that time.

In this article we will be talking about a fault tolerance library i.e. Resilience4j has suddenly become so popular when it comes to handling faults, we have seen Netlfix’s Hystrix which is also a fault tolerance library. However, the support for it has been stopped. Also, this library was not capable of handling the asynchronous call but the Resilience4j is designed for Java8 and functional programming. Resilience4j enables the resilience in complex distributed systems where failure might take place. The library is considered to be very lightweight as it is only dependent on VAVR(which is also a functional programming library) and nothing else. Resilience4j would provide you higher-order functions to enhance any functional interface, lambda expression, or method reference with a Circuit Breaker, Rate Limiter, Retry, or Bulkhead, this apparently shows Resilience4j has got good support with functional programming.

Resilience4j has the following 6 core modules.

The circuit breaker has the following 3 states
Closed – Closed is when everything is normal, in the beginning, it will be in the closed state and if failures exceed the threshold value decided at the time of creating circuit breaker, the circuit will trip and go into an open state.

Open – Open is the state when the calls start to fail without any latency i.e calls will start to fail fast without even executing the function calls.

The figure below will help you understand the flow of a circuit breaker pattern. 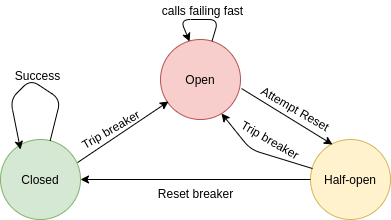 Alright, that was all about, what is a circuit breaker and how it works behind the scenes. We will now look at the ways, how we can actually set up circuit breaker pattern for a spring-boot 2 service.

Let’s set up a Springboot project with service users where we could get users. We will be using the Maven build tool to set up the project structure here.

Step2. Write the entry point for the project i.e Application.java

Step3. Create an application.properties file with all the configurations(can be found in the GitHub link shared below).

Step4. Write the controller class which will have the following endpoints.
The method below is used for successful calls i.e the method below would not cause an exception and works as expected in all the given scenarios if applicable.

The method below is used for failed requests which will essentially cause the exception and once the exception count reaches the threshold value defined in configurations, it will open up the circuit breaker.

The method below is a fallback method that will be invoked once the parent method fails for some reason or the downstream service is down.

private Mono<ResponseEntity> getUserFallback() { // You can fetch the value from cache here when the service is down, if the // fallback method also cause any exception the circuit breaker will go in // open state accordingly after multiple failed requests(Please check // configurations for that). return Mono.just(ResponseEntity.ok(User.builder().id("1").name("Deepak").build())); }

@CircuitBreaker annotation is the annotation that will invoke the circuit breaker when anything goes wrong in the application. This annotation takes two parameters, first being the service name which is also mentioned in the configuration, the second being the fallback method name which is optional.
To check, if the circuit breaker actually goes into the open state or other for that matter, you need to have the said(as mentioned in the application.yaml file) failed requests. If you fail to do it manually i.e open the circuit, you can make use of tools like Apache Bench (ab), Apache bench is a tool used for load testing and benchmarking tool for the HTTP server. Also, you can use Apache Jmeter which is again a load testing tool. Once the circuit breaker goes into an open state the calls will start to fail fast i.e without any delay.

That’s pretty much it from the article, full code can be found on the GitHub repository, feel free to fork it. If you have any feedback or queries, please do let me know in the comments. Also, if you liked the article, please give me a thumbs up and I will keep writing blogs like this for you in the future as well. Keep reading and Keep coding