source link: https://www.techradar.com/how-to/cyberpunk-2077-romance-guide
Go to the source link to view the article. You can view the picture content, updated content and better typesetting reading experience. If the link is broken, please click the button below to view the snapshot at that time.

By Jordan Oloman a day ago

The birds and the beeps 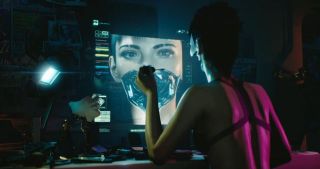 From Dragon Age to Mass Effect and everything in between, Western RPGs are notorious for their romanceable companions, and Cyberpunk 2077 delivers in that department. If you want to get jiggy with it in Night City, you have plenty of options.

In this guide, we’re going to run through all of the people you can court in Cyberpunk 2077, showing you what criteria you need to meet before you can date and romance some of Night City’s most compelling characters.

Spoilers for Cyberpunk 2077 ahead.

How to romance Panam Palmer

You’ll meet Panam as part of the game’s main story, and you can flirt with her at the bar after her associated main mission if you fancy. Following that, you need to crack on with her side quest narrative, starting with Riders on the Storm, then With A Little Help From My Friends and Queen of the Highway.

Throughout, you want to defend Panam in front of Saul, support her when possible, ask to share a bed in the shack and then scoot closer to her at the campfire when prompted. In the final mission, you’ll both be inside a Basilisk tank, and she’ll ask to synchronize with you. That’s when things get steamy!

How to romance Judy Alvarez

You’ll encounter Judy very early into the main narrative of Cyberpunk 2077, as part of a meeting with Evelyn Parker. After you finish the mission where you must locate Eveyln at Clouds, you can then kick off a series of side quests with Judy that lead to romance. To make things easy, just side with her at every opportunity.

The main decision to make is that when you take over Clouds to give control back to the dolls, you need to resist Maiko’s plans to grab power from the Tyger Claws. Be careful with how you speak to Maiko after rejecting her plan in the boardroom as if you’re forced to kill her Judy won’t be happy with that either.

Once that arc is all done and dusted, you’ll get the mission Pyramid Song where you go diving with Judy. Once you’re back on dry land, you’ll be prompted to make a move on her and start a relationship.

How to romance Kerry Eurodyne

You’ll meet Kerry Eurodyne during the interludes between acts, where you take control of Johnny Silverhand. As an old member of Johnny’s band, Kerry gets close to V as you start to unravel the Keanu Reeves-sized problem in your brain. You need to indulge Johnny Silverhand’s side quest Chippin In’ at the midpoint of the game to unlock this romance, which starts with the mission Holdin’ On and sees you reunite Samurai.

You’ll take part in an arc after you complete this one starting with the mission A Like Supreme, where Kerry is dealing with a pop band called Us Cracks who want to cover one of his old tunes. He’s in denial about the death of rock music, so coax him through his midlife crisis and take his side where possible, poor soul. Eventually, you’ll end up on his manager’s burning boat, where you can accept his advances and get busy.

How to romance River Ward

River is the easiest romance to miss in Cyberpunk 2077 because you don’t technically have to meet him as part of the main story. You need to accept the mission I Fought The Law from the Peralez politicians before you can crack on with him, so make sure you don’t miss that.

Once that mission is wrapped up, you’ll help him save his nephew from… well, we’ll leave it there not to spoil anything because it’s a great mission, called The Hunt. Once that’s done, you’ll move on to a mission called Following the River, where you help him make Jambalaya. He’ll invite you to sit on top of a water tower with him, at which point you can smooch and make it official.