source link: http://danhough.com/busking/2018-12-27-victoria/
Go to the source link to view the article. You can view the picture content, updated content and better typesetting reading experience. If the link is broken, please click the button below to view the snapshot at that time.

Merry Christmas! Any sensible busker would practice classic Christmas hits like Last Christmas, and Fairytale of New York, and Wonderful Christmastime, and that’s why I went to Victoria station on Christmas Eve and played a mixture of:

But hey, I wore a santa hat so it was totally fine!

This was a really fun session. Several very responsive, friendly members of the public walked by - it wasn’t very busy but those who were around were really nice. Three things stick out.

The “I used to work for Ed Sheeran” Guy

Picture this: I’m in between two songs and I’m about to play the first chord when a lanky, roughly 30yo man in a camo tracksuit with a Fortnum & Mason bag walks up and asks if he can play. I’m reluctant, so I give the stock “my licence only covers me…but you can sing if you like?” answer.

He gets closer, when I realise that he stinks of booze, and says, “I used to work for Ed Sheeran” and so he gently grabs the guitar while I’m holding it and starts strumming it while staring right into my eyes, our faces merely centimetres apart. It was unnerving.

Eventually I just said, “thanks, but I’m okay” and he took the hint and wandered off, probably to Grafton street to watch a girl playing fiddle in an Irish band with his good buddy Ed Sheeran.

The smartest child on Earth

While I was wrapping up and putting my gear away a mother and two kids came along. One of them (who looked about 7 or 8??) asked me, “Is a number with six zeroes in it bigger than 9,999?”

To which I replied, “are the six zeroes in front of or after another number?”

The boy, naturally, ignored me, and told me that the number was “just six zeroes, which is just zero, so it’s not bigger”.

You got me, little boy! 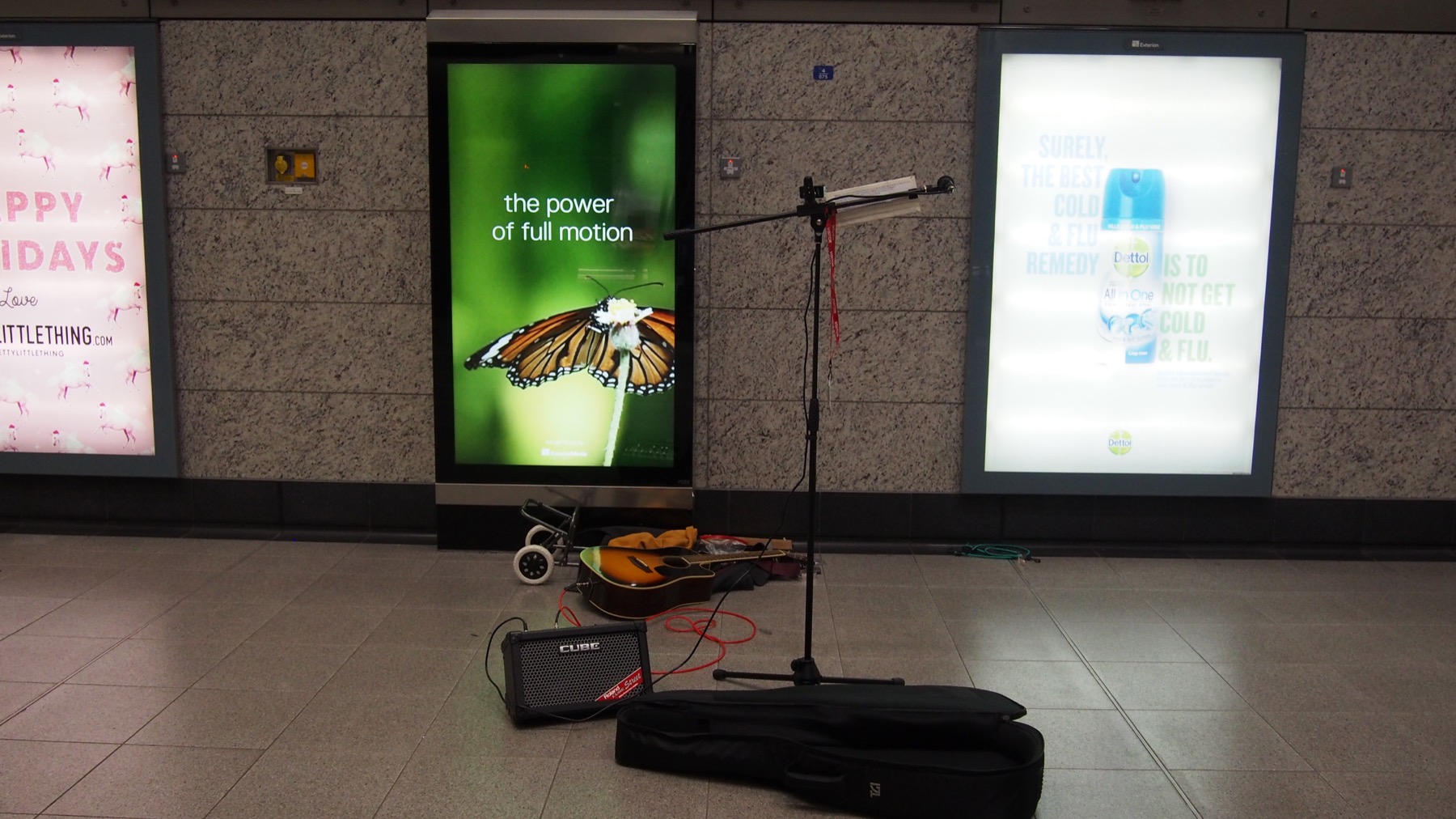 The pitch. That butterfly in the video ad behind me was moving constantly.

I played my traditional first song, Breakfast at Tiffany’s, which got me a cool £1.50! 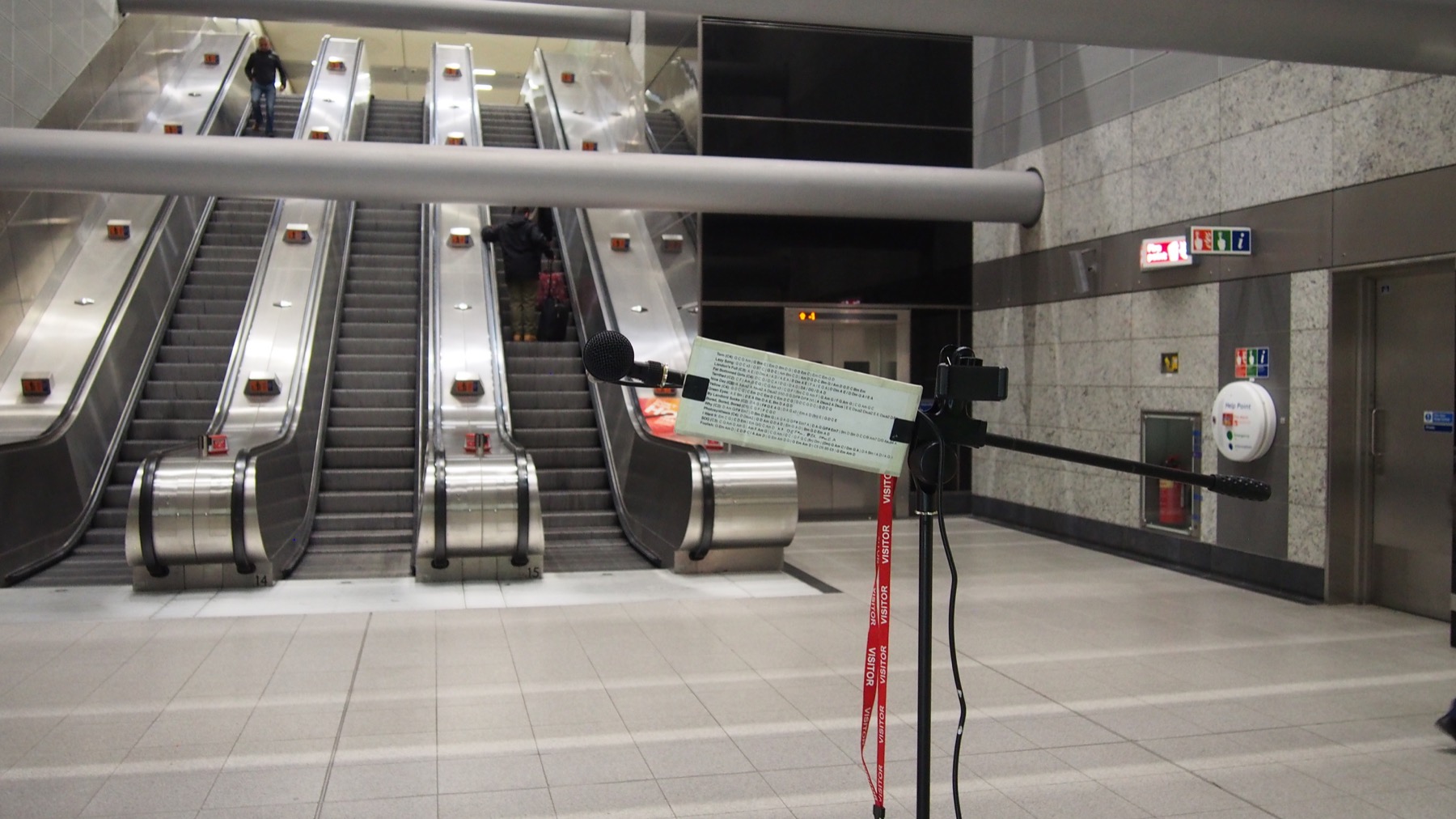 The view from the pitch. Up at the top of the escalator is the Cardinal Place shopping centre.

If you’ll allow me to be self-indulgent for a second: there’s this song I wrote called Come to London, which I’m hoping to release in 2-3 weeks (let’s call it January 18th 2018). It’s fun. Anyway, the punters at Victoria loved it. I got somewhere between £5 and £6 for it.

Another development: I got myself a little trolley to carry my stuff around. Very fetching, I’m sure you’ll agree. 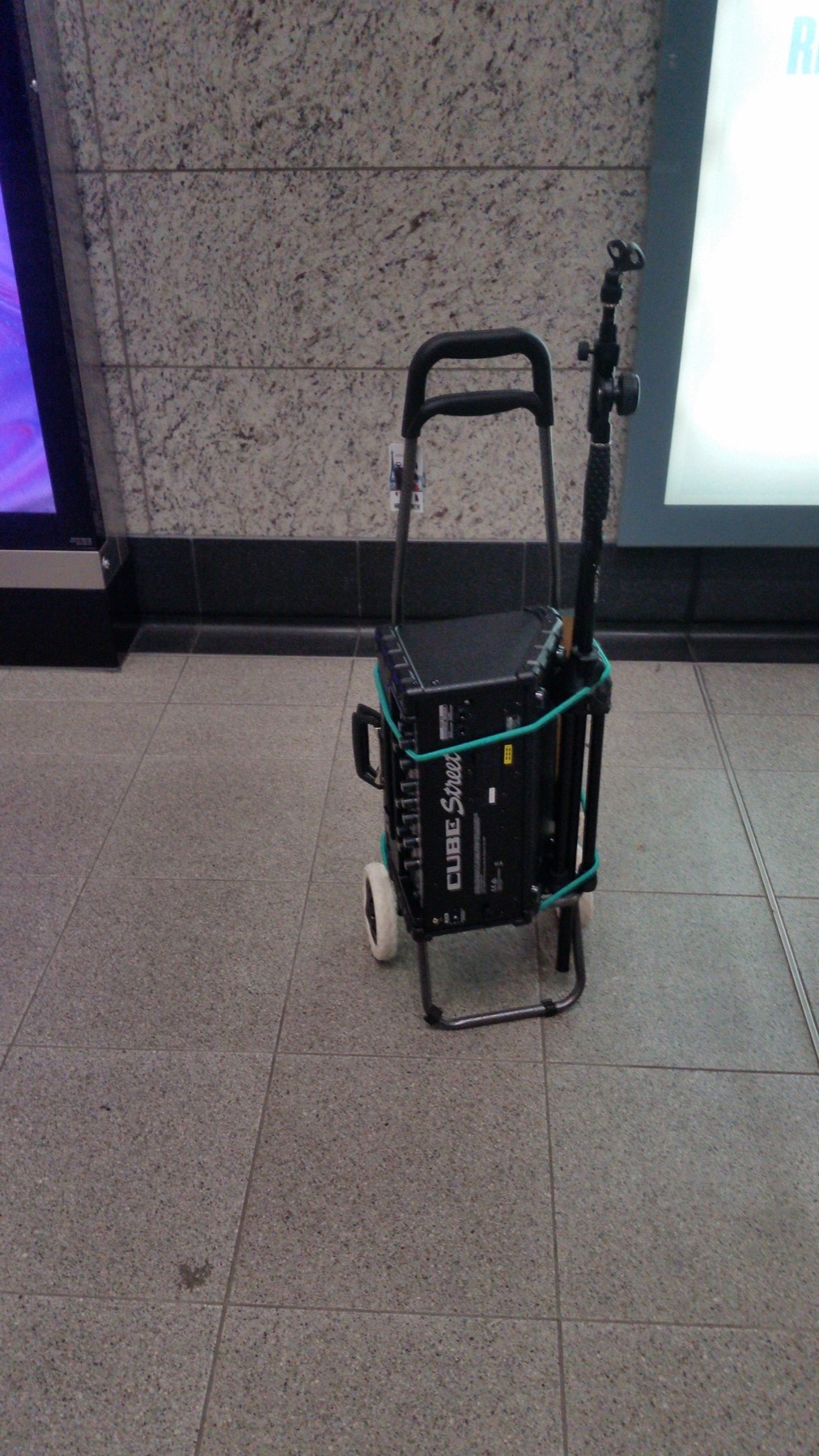 Think we could work together? Get in touch.
Get more in your inbox.