source link: https://www.androidpolice.com/2019/10/17/new-google-assistant-gesture-navigation-only/
Go to the source link to view the article. You can view the picture content, updated content and better typesetting reading experience. If the link is broken, please click the button below to view the snapshot at that time.

The Pixel 4 and 4 XL have been revealed this Tuesday, and they'll bring a faster and more powerful Google Assistant along. It should understand you better with the help of local speech processing and you won't need to keep saying "OK Google" over and over again. However, if you're a fan of the good ol' three-button navigation, you'll be left out in the cold. According to a Google support document, the new Assistant requires gesture navigation to work.

On the help website, Google describes what you need to get the new experience going and how you can set it up. There are also a few suggestions for when it won't show up, one of them telling you to "check that navigation mode is set to gesture navigation." Since the first-gen gestures from Android 9 Pie are officially called "two-button navigation" in Settings, you probably won't be able to use them with the new Assistant, either. 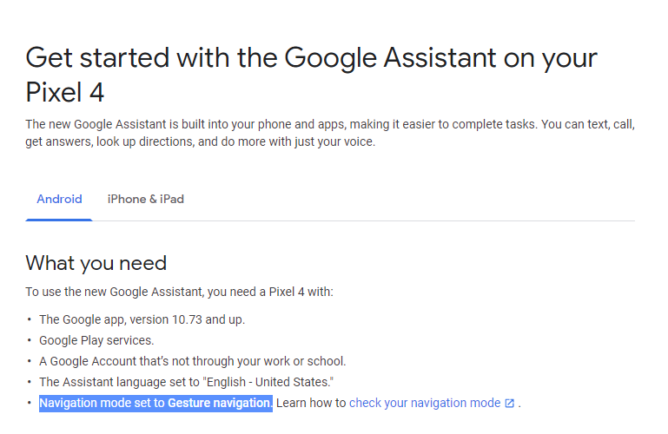 We should note, that although gesture navigation needs to be enabled for the new Assistant to work, older methods for triggering the Assistant like via the hotword and squeeze should still be around — that is to say, the Assistant won't only appear when triggered via gestures, the new gestures are just a requirement for it to be enabled.

It's unclear whether this limitation is permanent or if the Assistant will come to other navigation modes in a later release, just like gestural navigation will only be available to third-party launchers after an update to Android 10. Hopefully, the revamped Assistant will find its way into button navigation, as people with motor impairment dependent on it might benefit from the new voice control the most.

Google has again contacted us to let us know its earlier correction was in error, flip-flopping on its position. Our original story was correct, and Google has explicitly confirmed to us that the new gesture navigation does, in fact, need to be enabled to use the new Assistant, even if it is triggered outside the gesture system.