source link: https://arstechnica.com/science/2022/09/nasa-cancels-artemis-i-launch-attempt-but-will-delay-rollback-decision/
Go to the source link to view the article. You can view the picture content, updated content and better typesetting reading experience. If the link is broken, please click the button below to view the snapshot at that time.

NASA is buying some time with this decision. 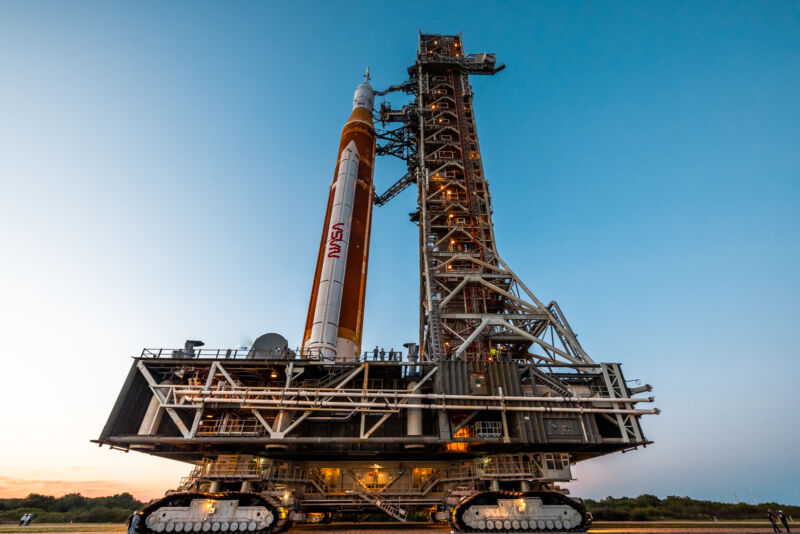 Enlarge / NASA's Space Launch System rocket may be rolling back to the Vehicle Assembly Building on Sunday night, or maybe not.
Trevor Mahlmann

NASA on Saturday announced that it will no longer attempt to launch its Artemis I mission on Tuesday, September 27, as Tropical Storm Ian continues developing in the Caribbean Sea.

Instead of preparing the massive Space Launch System rocket for liftoff in three days, teams at Kennedy Space Center in Florida will instead start to configure the ground systems and vehicle for a potential roll back to a large hangar, the Vehicle Assembly Building. Sheltering inside this building would protect the $4 billion rocket and Orion spacecraft from any foul weather due to Ian.

Earlier, NASA had said it would make a decision by Saturday afternoon on whether to roll the Artemis I mission back inside the hangar. However, in its announcement on Saturday the agency said it would now make that decision on Sunday.

"Engineers deferred a final decision about the roll to Sunday, Sept. 25, to allow for additional data gathering and analysis," the space agency said in a blog post. "If Artemis I managers elect to roll back, it would begin late Sunday night or early Monday morning."

According to an agency spokesperson, NASA will not set a new launch date until the Artemis I roll back decision is made. Theoretically September 28 is in play, but at present the forecast looks pretty bad, and it may not be possible to reconfigure the rocket for a launch by then, anyway. That would leave October 1 and 2 as the most likely options. The current launch period closes on October 5. After that time NASA will have to return to the Vehicle Assembly Building regardless of what happens, delaying the much-anticipated Artemis I launch to no earlier than the second half of November.

NASA is buying some time with this decision. By preparing for a roll back now, NASA should be able to complete that operation by Monday night, prudently allowing plenty of time to get the SLS rocket into a protected space and sending its employees home before Ian directly affects Florida.

Over the next 24 hours, then, agency decision-makers can follow the forecasts made by the National Hurricane Center as well as launch range weather officers with the US Space Force in Florida about Ian's prospects.

Much of the forecast model guidance has shifted westward during the last few runs, and if this trend were to continue, it is plausible that NASA could experience mild enough weather at Kennedy Space Center to keep its rocket at the launch site, exposed to the elements. However this is far from guaranteed, as the forecast for Ian's position by the middle of next week remains highly uncertain. 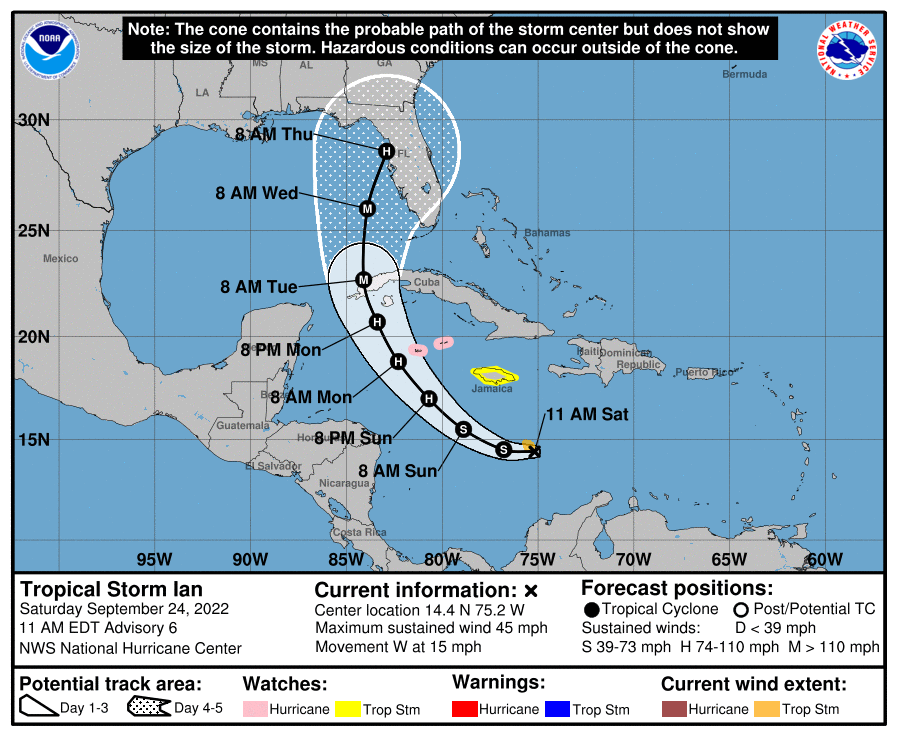 Five-day forecast for Tropical Storm Ian as of 11 am ET (15:00 UTC) on Saturday.
National Hurricane Center

As of the latest forecast from the Miami-based National Hurricane Center, Ian is expected to strike the western coast of Florida as a major hurricane on Wednesday or Thursday. NASA's facilities at Kennedy Space Center remain in the "cone of uncertainty" published by the hurricane center. However, this cone is far from infallible—the center moves outside the cone in about one of every three forecasts, and hurricane impacts typically extend far beyond the storm's center. Additionally, on the current hurricane center track, NASA's facilities would lie on the "dirty" side of the storm, where the stronger winds and heavier rains are likely to occur.

The good news is that NOAA aircraft will be gathering data from inside, and the environment surrounding Ian, today to inform the overnight forecast model runs. In addition, if the storm's center becomes better defined, that will add confidence to the forecast by Sunday morning.