source link: https://www.businessinsider.com/video-mobilized-russian-soldiers-in-drunken-brawl-amid-putins-new-draft-2022-9
Go to the source link to view the article. You can view the picture content, updated content and better typesetting reading experience. If the link is broken, please click the button below to view the snapshot at that time. 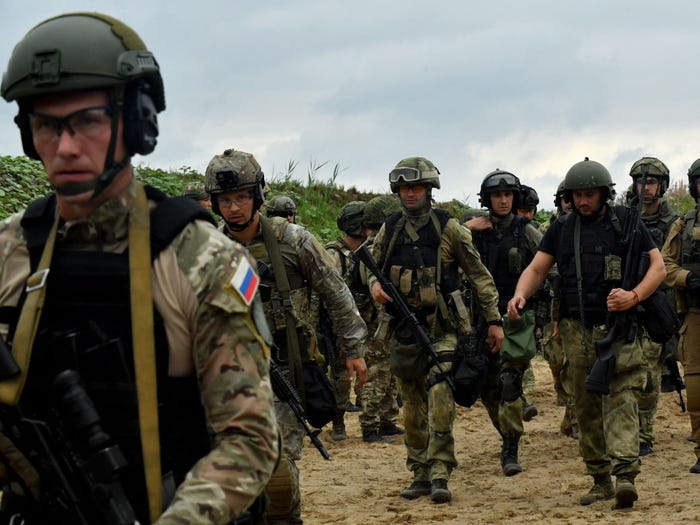 A video on social media, shared by a Belarussian journalist, appears to show recently mobilized soldiers engaging in a drunken brawl.

The video, shot in the Yuzhno-Kurilsk region in the Sakhalin Oblast, shows men slamming into each other, throwing slurred punches, and shouting. Insider was not able to independently verify it.

Putin announced on Wednesday the partial mobilization of the country's military reservists, with Russian officials stating that 300,000 reservists will be drafted immediately.

In response to Russia's problematic mobilization, the sale of alcohol within 300 meters (985 feet) of military bases is banned in some eastern regions of Russia, according to reports.

Drunken incidents by Russian soldiers have been a frequent occurrence during the invasion of Ukraine, with one drunken gunfight in the occupied Ukrainian city of Kherson leaving at least three dead.

In August, one new Russian combat unit, the 3rd Army Corps, was meant to turn the tide of fighting but instead spent much of their time drunk and bothering residents.

Indeed, in the days leading up to Russia's invasion of Ukraine on February 24, Ukrainian spies sent to Russia to conduct surveillance on the Russian military encountered "a lot" of drunk soldiers, according to a Washington Post report.

The Russian troops had traded fuel and other supplies for alcohol, said a Ukrainian official who saw the spy reports told the Post.

Poor morale among Russian soldiers is often attributed to issues of alcohol over-consumption and infighting.

Meanwhile, unsuitable candidates are being drafted in the latest scramble to bulk up its army in Ukraine, including minors and the elderly with severe health conditions.

"President Putin's call to partially mobilize Russian citizens, directing them to fight in Ukraine, reflects the Kremlin's struggles on the battlefield, the unpopularity of the war, and Russians' unwillingness to fight in it," US Secretary of State Antony Blinken said in a statement.

Plummeting morale among Russians has often been attributed to such issues within the military, with an intelligence report from Britain's defense ministry saying, "The impact of Russia's manpower challenge has become increasingly severe."

Speaking to reporters on Monday, a senior US defense official said, "We're seeing the Kremlin increasingly straining to find new recruits to fill out their thin ranks, and the Russians are performing so poorly that the news from Kharkiv province has inspired many Russian volunteers to refuse combat."