source link: https://www.businessinsider.com/ive-been-using-food-waste-app-snap-up-free-food-2022-9
Go to the source link to view the article. You can view the picture content, updated content and better typesetting reading experience. If the link is broken, please click the button below to view the snapshot at that time.

I've been using a food-waste app to snap up free food, including coffee-shop salads, cookies, and meat from grocery stores 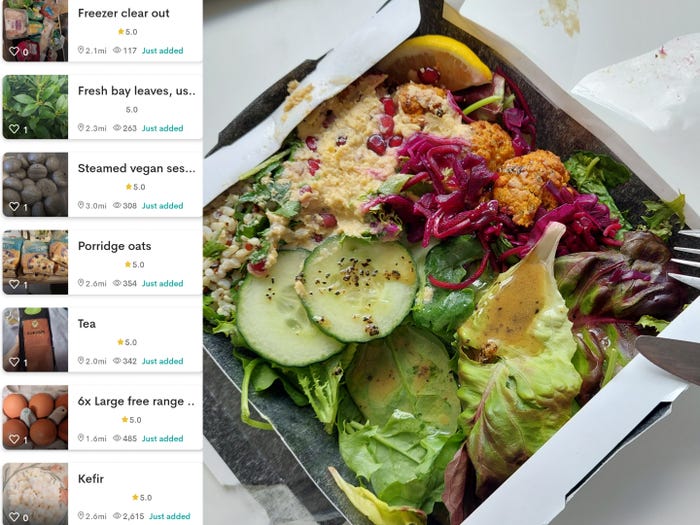 I've been using a food-waste app for a few months to get free food and find homes for items I no longer want.

People can use Olio to give away products they no longer want, including leftover ingredients, unwanted clothing, and books they've read.

Since I started using the app in May, I've collected food including croissants, sandwiches, and long-life pantry products. I've used Olio to find new homes for books I've read, clothes I don't like, and sweet rice I realized I'd never cook.

By using Olio I've saved money, but for me the main thing is preventing food from being thrown away while it's still edible.

Many people use the app to give away items if they're moving house, but some use it to give away food before they go on vacation, because they bought a product they found out they don't like, or simply because they're having a clearout.

But there's also another side to Olio. Companies such as retailers and coffee shops can pay to use Olio as a waste-disposal service. Volunteer – called a "food waste hero" – collects items from a store as they near expiry date. Olio says it has 63,000 food waste heroes, mostly in the UK.

All users must write a description, submit photos, and say when and where the product can be collected.

For food, users often state the expiry date, too. Sometimes the descriptions are thorough, while others are vague. One time I used the app to collect what was simply listed as "croissants." The user gave me his address, where I found 47 pastries waiting on his doorstep.

Other food I've collected include items from Amazon Fresh and Pret a Manger, as well as tea, biscuits, and tinned soup from people who were having a clearout or moving house.

A Pret a Manger salad I collected from Olio. Grace Dean/Insider

Everything on Olio is free. Users cannot accept money or any other compensation in exchange for goods.

An important thing to remember is that corporate listings are usually because the food is about to expire. Pre-packaged products come with dates on them, but for some items – like the croissants – it's a judgment call as to whether they're safe to leave for a couple of days.

After setting your approximate location on the app, Olio shows items available to collect nearby. You can choose how far you're willing to travel and filter to see the newest listings. Dozens of new items are added to Olio every day within the three mile radius I use.

Collecting and sharing items can feel a little scary at first. Your profile includes your first name, and you don't have to add a picture of yourself but I think that it makes you seem a bit more trustworthy when collecting items.

When you upload an item, you set their own pickup location. While in many cases users allowed people to collect them from their house, they can also set the pickup location as a public place.

After giving an item, both parties are invited to rate each other. Olio says users who fail to show up to collections could be booted off the app, and it's easy to report other users for poor conduct.

The app is different from Too Good To Go, which also works to tackle food waste. It only features corporate listings from the companies themselves, and users collect them from the establishment in question. You also have to pay for these items, too, and they're mainly done on a "magic bag" basis where you don't know what you'll get until you collect it.

Tessa Clarke, one of the company's cofounders, told Insider she had a "lightbulb moment" in 2014 when she was moving house and trying to give away uneaten food. The Olio app went live in July 2015.

Clarke says it now has 6.3 million registered users, up from 2.3 million in September 2020 and 4.7 million a year later. Half the food listed on the app gets requested in about 20 minutes, she adds.

There are also large numbers of Olio users in Singapore, Ireland, and Mexico as well as the UK, Clarke said. It's also active in the US.

Clarke said that companies partner with Olio so that they can become zero waste. She said these companies don't have the time to list their products themselves or turn to Olio after first trying to give them to charities themselves.

Volunteering can be a big time commitment, with some helpers assisting on a one-off basis and others collecting items multiple times a week. Volunteers can keep up to 10% of the food they collect to redistribute, making it popular among students, Clarke said.

The app raised 43 million euros ($43 million) in a funding round last September.