source link: https://uploadvr.com/pico-4-release-october-18-price/
Go to the source link to view the article. You can view the picture content, updated content and better typesetting reading experience. If the link is broken, please click the button below to view the snapshot at that time.

Pico is no newcomer to VR – it revealed its first headset in 2016. Last year it was acquired by ByteDance, the Chinese tech giant behind TikTok. Pico has always sold to Chinese consumers, but focused only on businesses elsewhere. This changed earlier this year with the launch of Pico Neo 3 Link to European consumers. But that was just a “beta program”, with the company teasing a successor by offering a 35% discount for it.

That successor is Pico 4, and we have hands-on impressions here. 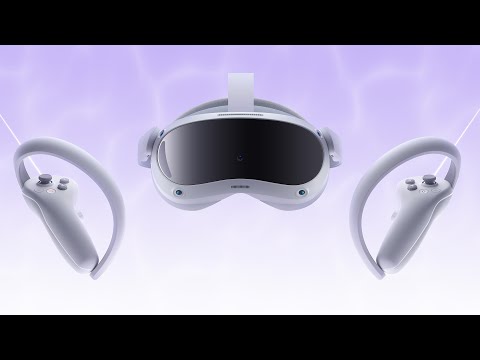 The slimmer & lighter design is achieved through the use of pancake lenses, which support smaller panels with a shorter gap to the lenses. And as with Pico Neo 3, the battery is in the rear of the strap. Whereas Meta’s Quest 2 with fresnel lenses and the battery in the front weighs 470 grams without straps, Pico 4 without straps is almost 40% lighter at 295 grams.

Despite enabling a more compact design, Pico claims the new lenses actually have a wider field of view: 105° diagonal. That’s up from the 98° diagonal of Pico Neo 3 Link. And whereas Neo 3 (and Quest 2) only offer three preset lens separation distances, Pico 4’s lenses are stepless and motorized, supporting interpupillary distances (IPDs) of 62～72mm. You set your IPD inside VR, and the lenses move themselves to match.

The LCD resolution has been increased from 1832×1920 per eye to 2160×2160 per eye. Factoring in the wider field of view, this equates to a 10% increase in angular resolution (assuming similar panel utilization). But while Pico Neo 3 has an experimental 120Hz refresh rate, Pico 4’s current max refresh rate is 90 Hz.

The controllers have also been redesigned. Rather than housing the infrared LEDs in a ring in front of your hand like Pico Neo 3 or Quest 2, Pico 4’s controllers place them in an arc over your hands. Pico points out this means your hands can get closer together without bashing the controllers together, for actions such as cocking a pistol or pouring water into a cup.

Pico claims the headset battery will last up to 3 hours, and it supports Quick Charge 3.0.

As with the Neo 3 and Quest 2, Pico 4 supports SteamVR by wirelessly streaming from a gaming PC over your home Wi-Fi network. There was no mention of a wired PC mode this time, but we’ve reached out to Pico to ask.

Pico Fitness Band is an upcoming wearable tracker “able to track your body movements” that will be able to detect actions “such as shaking, tilting and kicking”.

Pico claims it can also predict your full body pose using a machine learning algorithm. This is a significant claim, so we’ll be testing it as soon as we can get our hands on this hardware.

But the company now has its own major exclusive too: Just Dance VR. It’s launching in 2023 through an exclusive partnership with Ubisoft, so won’t be available on Quest 2 or PSVR 2.

A version with eye tracking and face tracking sensors will launch to Chinese consumers as Pico 4 Pro. Pico told us it won’t launch to consumers outside China, but will be available to businesses in Europe as Pico 4 Enterprise.

As well as the standard use cases such as enabling eye contact in social experiences, the eye tracking sensors can detect your IPD. Paired with the motorized lens movement, this means IPD adjustment is fully automatic.

Pricing and the exact launch date for Pico 4 Enterprise hasn’t yet been announced.

Preorders for Pico 4 will open September 23 for Neo 3 Link owners, and in October for everyone else. Pico says it plans to launch in Singapore and Malaysia later this year.

Pico didn’t mention any plans to launch in North America, though in June it posted a job listing “responsible for the sales and marketing of Pico’s overall product in the US consumer market”.