source link: https://www.linuxjournal.com/content/linux-journal-ceases-publication
Go to the source link to view the article. You can view the picture content, updated content and better typesetting reading experience. If the link is broken, please click the button below to view the snapshot at that time. 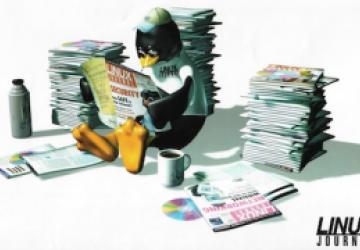 On January 1, 2018 Linux Journal was saved and brought back to life by a company called London Trust Media, the parent company of Private Internet Access. The comeback issue of Linux Journal has a release date of March 15, 2018. The article below, originally published in early December of 2017, is preserved for history.

It looks like we’re at the end, folks. If all goes according to a plan we’d rather not have, the November issue of Linux Journal was our last.

The simple fact is that we’ve run out of money, and options along with it. We never had a wealthy corporate parent or deep pockets of our own, and that made us an anomaly among publishers, from start to finish. While we got to be good at flying close to the ground for a long time, we lost what little elevation we had in November, when the scale finally tipped irrevocably to the negative.

While we see a future like publishing’s past—a time when advertisers sponsor a publication because they value its brand and readers—the advertising world we have today would rather chase eyeballs, preferably by planting tracking beacons in readers' browsers and zapping them with ads anywhere those readers show up. But that future isn’t here, and the past is long gone.

There is some hope, we suppose, that a savior might come through; but it will have to be one willing to pick up some of our debt, in addition to our brand, our archive, our domains and our subscribers and readers. If you know anyone who can make a serious offer, let us know. Otherwise, watch LinuxJournal.com and hope that at least our legacy archives (which go back to Linux Journal’s birth in April 1994, when Linux hit 1.0) won’t go away. There’s a lot of great stuff here, and a lot of history we’d hate the world to lose.

Our biggest regret is that we don’t even have enough money to return to the people who have valued us most: our subscribers. For that we could not apologize more deeply or sincerely. What we do have for subscribers:

Linux Pro Magazine has offered our subscribers six free issues of their magazine, a publication we at Linux Journal have always admired. In our time of need, they were the first ones there for us, and we are thankful for their gracious offer. We also just finished up our 2017 archive today, which includes every issue we’ve ever published, including the first and last ones. Normally we sell that for $25, but obviously subscribers will get it for no cost. Subscribers, watch for an e-mail with details about both.

We also hope there is some solace in knowing that we worked very, very hard at keeping Linux Journal going, and we’ve been doing that for a long time, running the leanest, smallest possible operation we could. We are a collection mostly of volunteers, and some of our employees haven’t been paid in months. We still owe money to freelancers as well. There is a limit to how long a publisher can maintain those neglects, and that limit has now been reached.

It has been a great run, folks. A big hats-off to everyone who contributed to our birth, our success and our persistence over these many years. We’d run the credits now, but the list would be too long, and the risk of leaving worthy people out would be too high. You know who you are. Our thanks again.

Carlie Fairchild is Linux Journal’s Publisher and guiding spirit. She’s been actively engaged in the Linux community for two decades and is responsible for setting the magazine’s overall direction. Carlie leads a motley team of geeks and journalists to ensure that Linux Journal stays true to its founding ideologies of personal freedom and open-source technical innovation.