Crash Bandicoot 4 multiplayer: is it online and co-op?

source link: https://www.techradar.com/how-to/crash-bandicoot-4-multiplayer-is-it-online-and-co-op
Go to the source link to view the article. You can view the picture content, updated content and better typesetting reading experience. If the link is broken, please click the button below to view the snapshot at that time.

Crash Bandicoot 4 multiplayer: is it online and co-op? 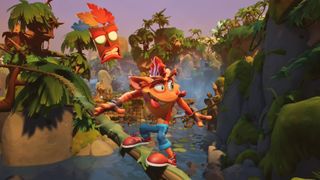 Crash Bandicoot 4 multiplayer is a great way to experience the latest sequel of the classic platformer franchise. The Toys for Bob sequel is a return to form for Crash, who hadn’t seen a new mainline sequel since 1998.

Crash Bandicoot has traditionally been a solo experience, at least in the mainline games, with level designs only meant for Crash on screen. That’s why, even if you could technically have another person playing, it would be chaos with two players trying to fight for screen space. That narrow use of space is a design philosophy that has carried over to Crash Bandicoot 4.

So, how does the game support up to four-player co-op? Crash Bandicoot 4: It’s About Time has a fairly ingenious way around this problem so you and your buddies can enjoy the game together without compromising the classic Crash Bandicoot feel.

But what modes does it have, how many can play, and can you play it with friends online? We have the answer to all these questions and more below. Here’s everything you need to know about Crash Bandicoot 4 multiplayer.

What multiplayer modes for Crash Bandicoot 4 have?

So, yes. To get it out of the way, Crash Bandicoot 4: It’s About Time does have multiplayer, though it offers a rather novel alternative to the more traditional co-op mode with both players on one level at the same time.

Instead, the main mode that the game offers is Pass N.Play. In this mode, up to four local players take turns making their way through levels. Once you die, or you hit a checkpoint, the game will prompt you to pass the controller to the next player. Then at the end of the level, each player will get a score.

There are other ways to play too. Two modes live under the Bandicoot Battle section on the title screen. Checkpoint Race is a competitive mode for two to four players where players play time trial versions of levels where players change at every checkpoint. The fastest player to reach the most checkpoints wins.

The final multiplayer mode is called Crate Combo. This is about racing to checkpoints again, but you want to destroy as many crates as possible with an ever-increasing multiplier. The player with the most points at the end wins.

Does Crash Bandicoot 4 have online multiplayer?

Sorry to break it to you but Crash Bandicoot 4: It’s About Time does not have online multiplayer. All of its multiplayer functionality is purely locally based. While this is undoubtedly frustrating for players who'd love to play with their friends that aren’t in their immediate vicinity, it's part of the nostalgic charm of the game.

It seems Toys for Bob has taken the Lego Star Wars: The Skywalker Saga multiplayer route and encouraged people to come together in person to play the game. That being the case, it’s still a big shame, as it will likely stop many players from playing together.