source link: https://www.techradar.com/news/google-pixel-7-pro-could-offer-one-key-display-upgrade-over-the-pixel-6-pro
Go to the source link to view the article. You can view the picture content, updated content and better typesetting reading experience. If the link is broken, please click the button below to view the snapshot at that time. 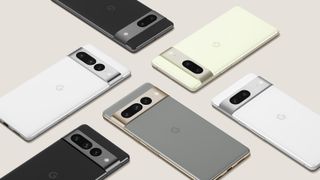 We know that the Google Pixel 7 and Google Pixel 7 Pro are real and on the way later this year, but we don't have too much in the way of official information about them. Now newly uncovered details reveal a little bit more about what to expect from these phones.

You may remember that a previous leak suggested that the Pixel 7 and the Pixel 7 Pro would use the same Samsung-made displays as their predecessors – but the latest analysis of tweaked Android source code suggests that's not quite right.

As flagged by Mishaal Rahman (opens in new tab) (via SamMobile (opens in new tab)), the Pixel 7 Pro may be using a slightly different Samsung display panel: one with the same 3120 x 1440 pixel resolution, but a higher maximum brightness level.

If we're interpreting the Android code correctly – which is being updated in preparation for the Pixel 7 phones – the Pixel 7 Pro will be able to hit 600 nits of brightness in manual mode (up from a maximum of 500 nits on the Google Pixel 6 Pro).

In high brightness mode, we'd be looking at a maximum of 1,000 nits of brightness for the Pixel 7 Pro, beating the 800 nits that the Pixel 6 Pro tops out at. The 2021 flagship phone from Google had a bright display, but the 2022 version could well beat it.

There's a long list of details that Google hasn't revealed about the Pixel 7 handsets, including when we might actually get to see them. Based on previous form though, they should be going on sale and launching fully around October time.

The Pixel 6 and the Pixel 6 Pro felt like something of a watershed moment for Google: for the first time with the Pixel series, the company actually seemed serious about competing with Apple and Samsung at the premium end of the market, and they had a pair of phones capable of doing that.

Now Google will need to build on the momentum that it's generated with the Pixel series – don't forget the Google Pixel 6a either, going on sale next month – and make sure that the Pixel 7 and the Pixel 7 Pro are among the best phones of 2022.

We know that the iPhone 14 is going to be out before the end of the year, and that the Galaxy S23 will launch early in 2023, so there's plenty of strong competition out there that the 2022 Pixel handsets are going to have to go head-to-head with.

The Pixel 7 and Pixel 7 need to be more of the same: a powerful chipset, excellent cameras, premium build quality, and a software experience that shows Android at its best (the new phones should come with Android 13 on board). If Google manages to hit an even more competitive price point, so much the better.