source link: https://www.businessinsider.com/jeff-bezos-rocket-knowledge-surprise-ula-ceo-tory-bruno-report-2022-6
Go to the source link to view the article. You can view the picture content, updated content and better typesetting reading experience. If the link is broken, please click the button below to view the snapshot at that time. 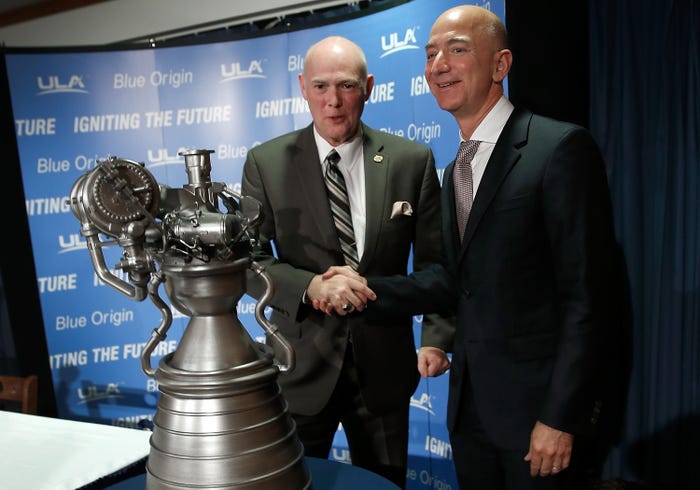 Jeff Bezos (R), the founder of Blue Origin and Amazon.com, shake hands behind a model of the new BE-4 rocket engine during a press conference with Tory Bruno (L), CEO of United Launch Alliance, at the National Press Club September 17, 2014. Win McNamee/Getty Images

Tory Bruno, CEO of United Launch Alliance (ULA), was amazed at Jeff Bezos' knowledge of rocket technology when they had an initial conversation together, The Washington Post reported.

"I was surprised the first time I sat with him," Bruno told The Post. "I don't think I would hurt his feelings if I said that, but I was very surprised at how well versed he was in the technology."

Blue Origin, an aerospace manufacturer founded by Bezos, and ULA, an American space launch company, announced in 2014 that they were partnering up to develop new American-made rocket engines for ULA's Vulcan-Centaur rocket.

Bruno told the newspaper that he and Bezos "hit it off right away."

"We had that mutual passion for space and for rocketry," Bruno told The Post. "He's the real deal. He's not faking it."

Since the agreement in 2014, the relationship between Blue Origin and ULA has reportedly been rocky. Industry sources told Ars Technica in July last year that ULA was frustrated at Blue Origin over delays to its rocket engines, consequently pushing back the Vulcan rocket's launch date.

Bruno previously expected the rocket to fly for the first time in 2021, but then told Aviation Week that year the launch had been held back until 2022. One industry source told Ars Technica that Bruno was hiding his true concern over the delays because he was protecting Blue Origin.

In his recent interview with The Post, Bruno said Blue Origin should deliver the engine this summer and the Vulcan rocket is set to launch later this year or in early 2023.

Bezos stepped down as CEO of retail giant Amazon in July 2021, saying he wanted to focus on Blue Origin, which he founded in 2000. The billionaire, whose love for space stems from his childhood, said in a 2018 interview with Axel Springer that the spaceflight company was his "most important work," more so than Amazon.