Hot Wheels expansion races back to Forza Horizon 5 this July

source link: https://www.neowin.net/news/hot-wheels-expansion-races-back-to-forza-horizon-5-this-july/
Go to the source link to view the article. You can view the picture content, updated content and better typesetting reading experience. If the link is broken, please click the button below to view the snapshot at that time.

Hot Wheels expansion races back to Forza Horizon 5 this July

Forza and Hot Wheels universes are crossing over again. Today, during the Xbox and Bethesda Games Showcase, Playground Games took to the stage to announce the Forza Horizon 5: Hot Wheels expansion. An unfortunate mishap on Steam last week ruined the surprise for many, but at least we now have confirmation of its existence.

The trailer showed the toy line's iconic tracks being used for wild routes across the new Horizon Hot Wheels Park "in the clouds high above Mexico." Playground says this is the most extreme tracks it has created for a Forza Horizon title, with over 200 kilometers of orange (and magnet) tracks available for players to do their gravity defying stunts.

Giant’s Canyon, Ice Cauldron, Forest Falls, and Horizon Nexus are also incoming as new biomes into the open world alongside a five-part Horizon Story chasing the history of Hot Wheels.

Moreover, the track editor EventLab mode of Forza Horizon 5 is being expanded to include the Hot Wheels Creation Kit with over 80 track and stunt pieces for players to create. 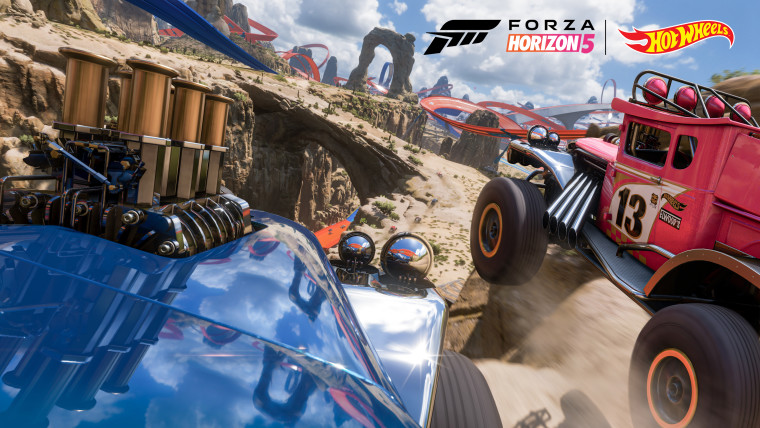 Hot Wheels and the Forza series have been collaborating for a long time now, and this isn't even the first time a full blown expansion has landed on the racing franchise. The 2016-released Forza Horizon 3 famously had a Hot Wheels DLC that delivered open world stunt-based action on the popular plastic tracks. Considering neither Forza Horizon 3 nor its expansions are available for purchase anymore, this endeavor may prove to be successful with both new and returning fans.

Forza Motorsport 7 has also crossed over to the toy land for specific cars, though obviously, the open-world Forza Horizon series is what's targeted for the expansion-sized DLC.

Forza Horizon 5 Hot Wheels expansion is coming out on PC, Xbox One, and Xbox Series X|S on July 19 as a standalone purchase as well as via the Add-on Bundle and Premium Edition. Xbox and PC Game Pass subscribers already have access to the base game, so they can also pick up the expansion or DLC to jump straight in.