Grounded is leaving early access and releasing fully this September

source link: https://www.techradar.com/news/grounded-is-leaving-early-access-and-releasing-in-september
Go to the source link to view the article. You can view the picture content, updated content and better typesetting reading experience. If the link is broken, please click the button below to view the snapshot at that time.

Grounded is leaving early access and releasing fully this September 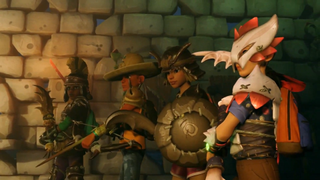 Obsidian Entertainment's survival game Grounded has received a new trailer at Microsoft and Bethesda showcase, confirming that it is finally leaving Early Access and entering its full release in September 2022.

The game, which initially came out in early access in 2020, has had a long road to getting to full release but it looks like that patience from the community is about to pay off.

In a new Grounded trailer, further details about what to expect in the full release were outlined. Now the 'full yard' is here with features such as base defense, wild biomes, crafts, huge bosses, and upgraded armor being shouted out.

On top of that, it was mentioned that "the full story" is coming with the release too. It's also claimed in the trailer that there are 10 million players, so the population should be healthy for the Xbox Game Pass game.

Grounded has you playing as shrunken teens in their backyard, taking on all manner of enormous insects and critters, as you fight your way for survival. Think Honey, I Shrunk the Kids meets Ark: Survival Evolved and you are in the right ballpark.

There was no specific date announced in past "September", but that isn't too long to wait for players. It seems like this will bring a lot of content not in the game yet, so mark your calendars... if not a little generally.

Patrick Dane is TechRadar Gaming's Guides Editor. With nearly a decade in the games press, he's been a consistent voice in the industry. He's written for a plethora of major publications and travelled the world doing it. He also has a deep passion for games as a service and their potential to tell evolving stories. To wit, he has over 2000 hours in Destiny 2, over 1000 in Overwatch and is now deeply into Valorant.