source link: https://9to5google.com/2022/06/10/lenovo-tab-p12-pro-review/
Go to the source link to view the article. You can view the picture content, updated content and better typesetting reading experience. If the link is broken, please click the button below to view the snapshot at that time. 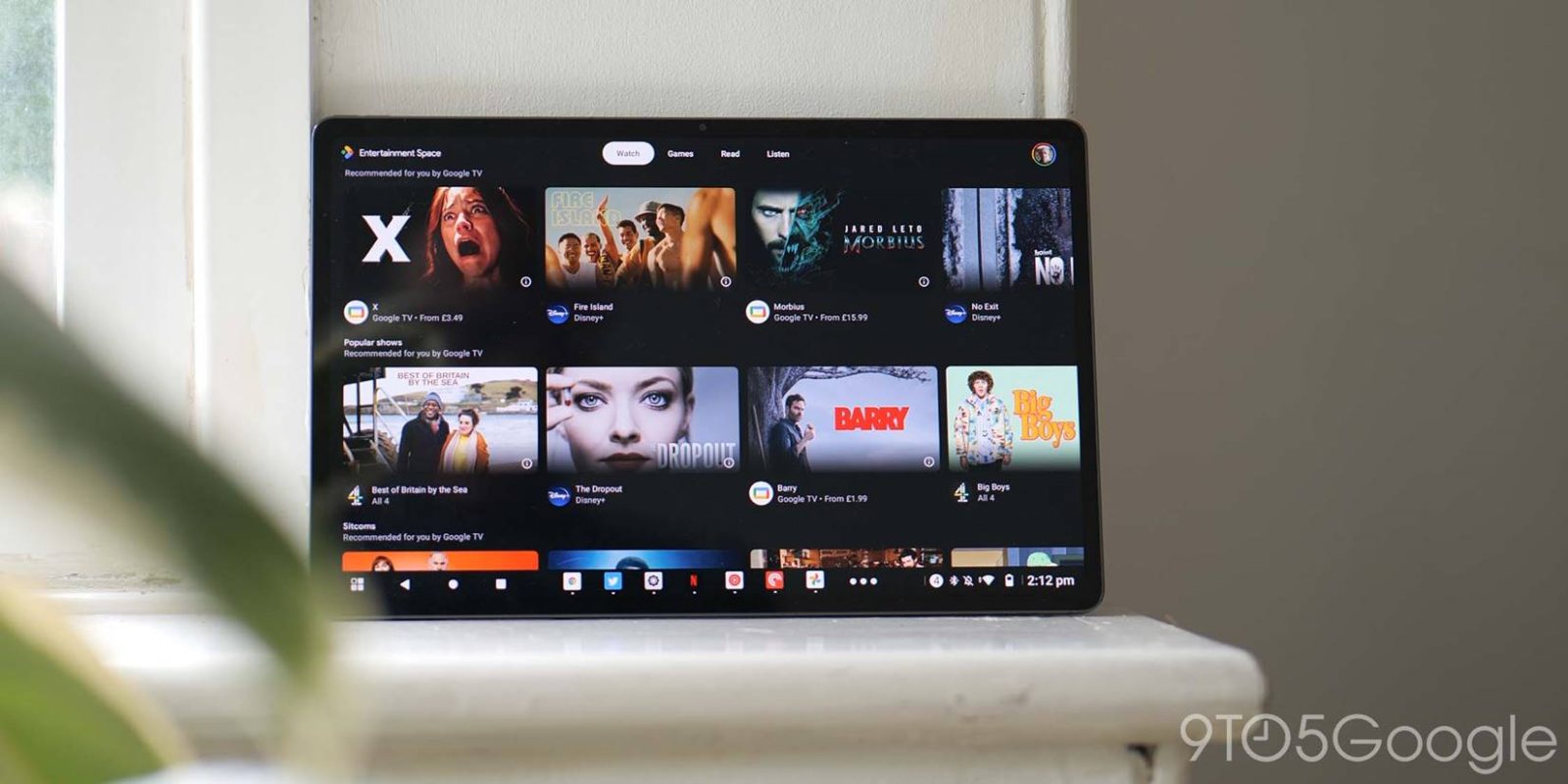 High-end Android tablets are few and far between. In some ways, this is a good thing, as historically the OS is not catered for larger screens all that effectively. At least the return of Google to the space means that some efforts are going to be made to improve the situation.

At this point in time, it’s still a bit of a messy and contentious area for any OEM to tackle, let alone a firm more at home in the PC and laptop space. That said, Lenovo’s stab at the upper-end of Android with the Tab P12 Pro has been well placed if a little confusing. 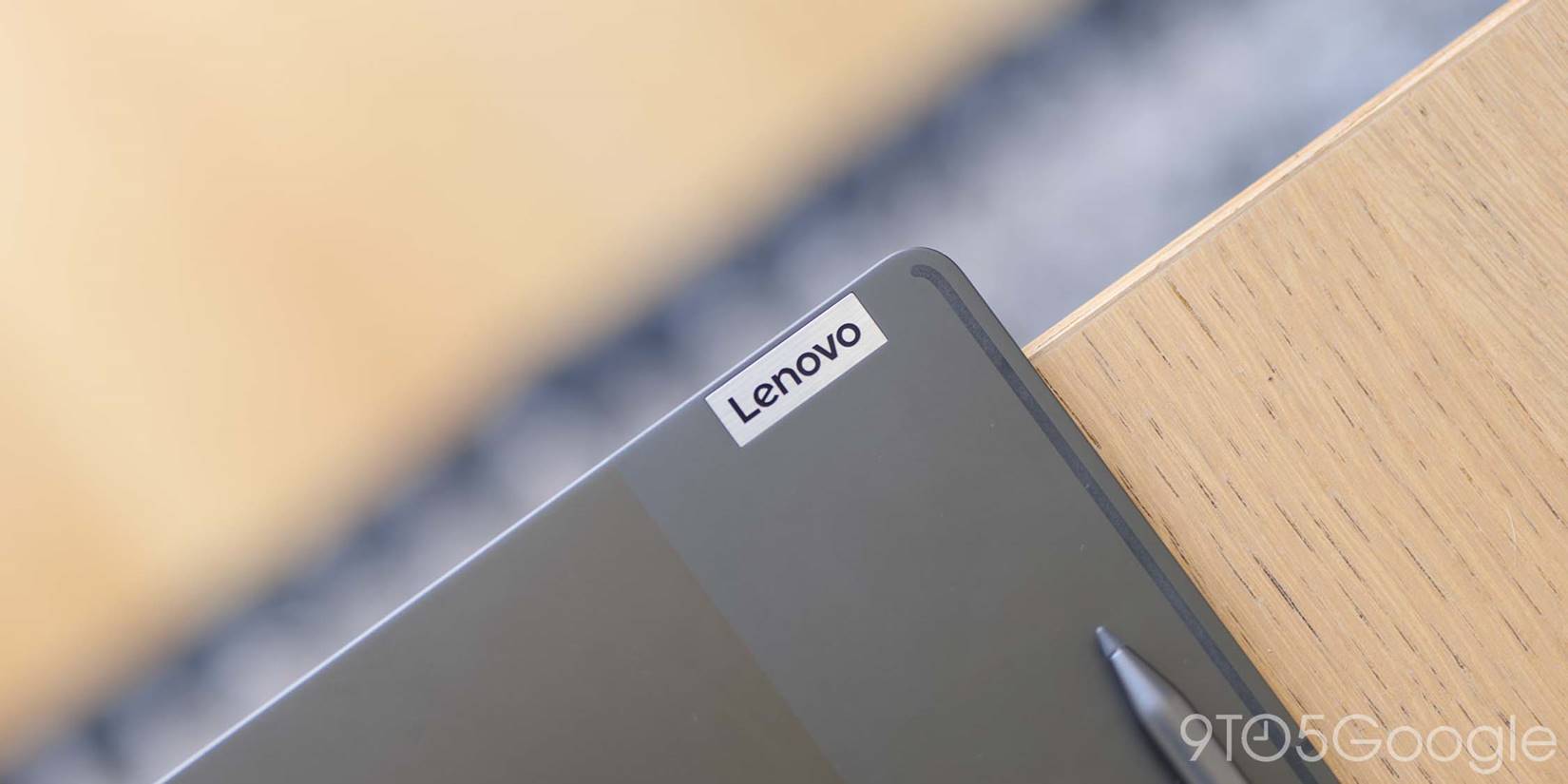 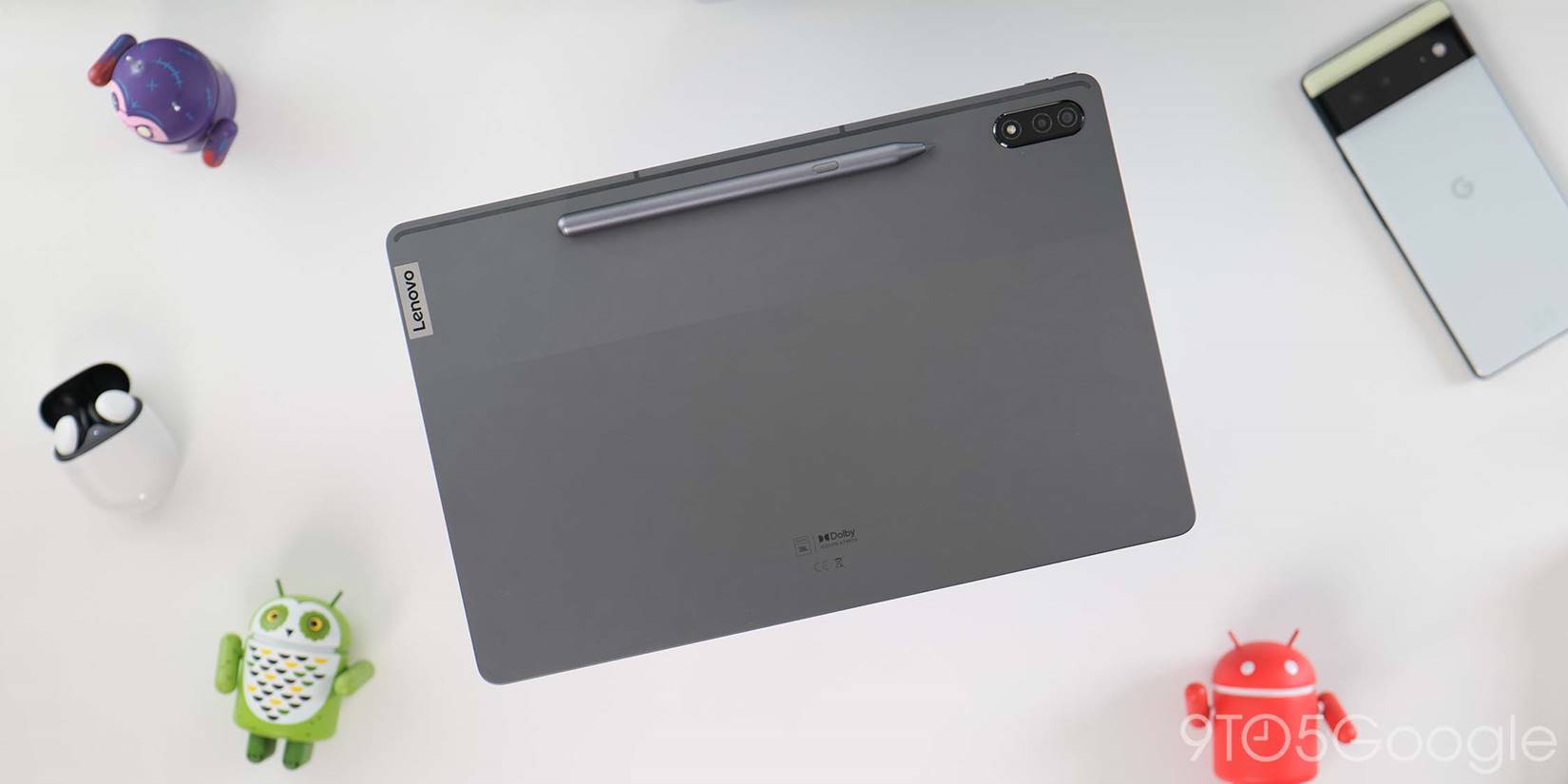 Taking the Tab P12 Pro out of the box and I was actually wowed at just how svelte this massive tablet is. It’s incredibly thin at just 5.6mm, which at first seemed like it would be a major worry. Kudos to Lenovo, as despite feeling like a sheet of glass, this is a sturdy blade-like tablet that is truly nice to hold.

The mixture of glass and metal combined with the thin chassis, there’s a surprising balance. You’re still given access to a number of input ports including a microSD card slot, and USB-C port for charging and even accessory expansion if you wanted to. Annoyingly there is no room for a 3.5mm headphone jack, which means that you’ll need Bluetooth earbuds or a USB-C to 3.5mm connector.

A power button scanner provides biometric security. The positioning when holding the Tab P12 Pro in landscape means that unlocking is fluid with your left index finger but the scanner can be a little bit slow compared to other power button scanners.

What’s more, you get a Precision Pen 3 stylus that resembles a marker in the box as standard. It’s by no means an essential, but one of those nice-to-haves given the ability to take notes quickly and easily on-the-go. The bigger problem I’ve found is that you can’t really do much with it as you don’t get many features.

Somewhat like the iPad, you’re able to “store” the stylus using magnets, but rather than along a side edge, you can only attach it to the back of the Tab P12 Pro. It’s easy to dislodge and, therefore, misplace. It’s an annoyance that doesn’t get any easier over time as it’s the way in which you’ll need to charge the pen. Samsung does something similar and that too is a frustrating design trait when you want to put the tablet in a bag or store it neatly. 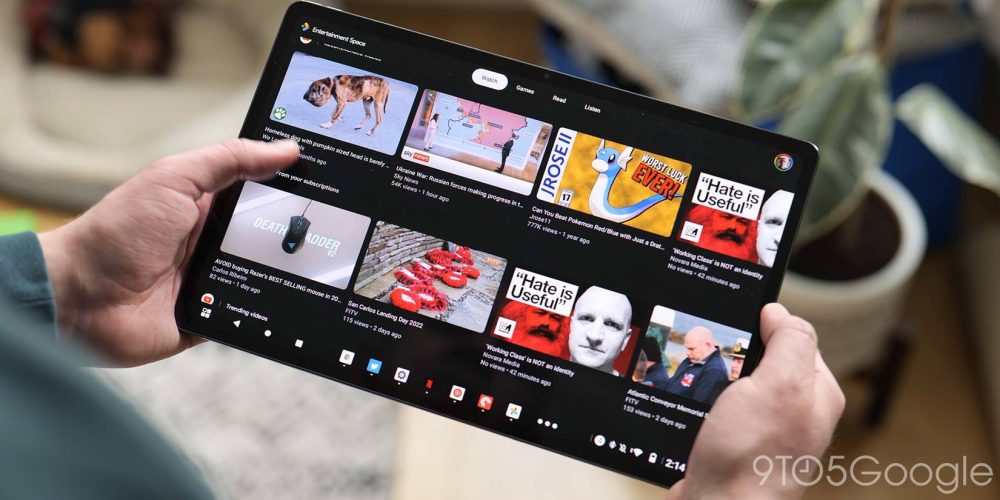 As far as secondary screens go, the Lenovo Tab P12 Pro has an exceptional 1,600 x 2,560-pixel AMOLED screen. It’s a joy to use and made even better courtesy of a 120Hz refresh rate. And while it’s not a necessary inclusion but it’s a good one nonetheless. Animations add an extra layer of fluidity that is often missing on cheap tablets. It also helps that colors are rich and deep, but the maximum brightness level isn’t quite as high as I’d like at 600 nits.

My sole complaint is the overly curved corners of the screen. It’s hard to spot from afar, but up close it looks weird and the curves don’t seem to match the outer edge. Once you notice this, it’s hard to unsee.

Luckily a series of solid speakers back up the display with deep rich sound emanating from this ultra-thin chassis. It’s a great combination that truly enhanced my recent Netflix marathons and has softened the blow of no 3.5mm headphone port. That said, at the higher volume levels things can fall apart a little bit, and when gaming you can muffle these outward firing speakers depending on just how you grip the tablet.

There’s an 8-megapixel camera hidden within the bezel that is well placed for landscape video calls. It’s acceptable at best, but should be more than solid enough for Zoom, Duo, or Meet calls if that is something you plan on doing. The rear camera is also rated at 8 megapixels and, again, acceptable too for video calling purposes. Beyond this, the cameras will pale in comparison to even most budget smartphones. 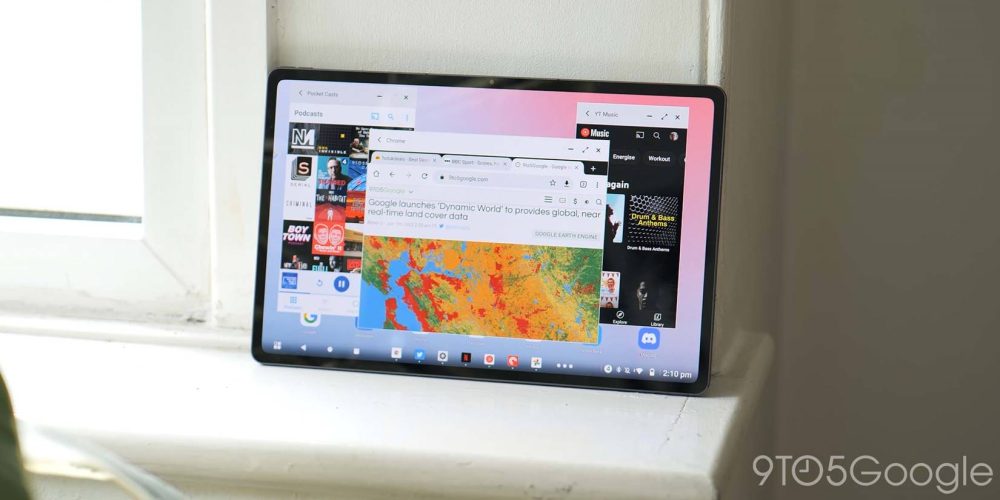 At the time of this review going live, the Lenovo Tab P12 Pro is still running Android 11. That is despite this tablet being one of a few that is eligible for the recent Android 13 Beta and has previously offered the first look at Android 12L or 12.1 prior to the stable release just a few months ago.

Android 11 is a fine OS, but it’s not one that works well with such a large screen without some tuning. Sadly, Lenovo has not offered anything notable that helps improve things in that regard. What you’re left with is a bit of a mess when it comes to usability.

A major case in point is the lock screen. The PIN entry screen is slap bang in the middle of the 12.6-inch screen and is scaled down for some strange reason. It means that you, like me, may want to dive into the Settings menu to adjust the Display size settings to the largest possible option. For me, the default out of the box experience means scaling is atrocious for such a large screen.

The only notable change to Android 11 here is the ability to swipe down to access the notification shade from any position when in landscape or portrait orientation. This panel will shift to make it slightly easier to access, but it’s one of a few tweaks of any real note. 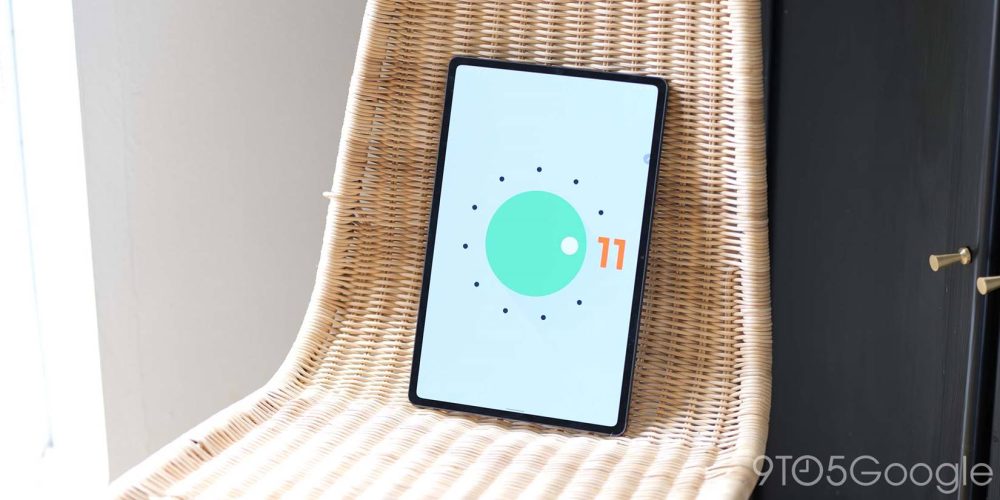 Luckily, Lenovo offers a “Productivity mode” that mimics Windows 10 and 11 with floating windows and a dedicated taskbar. Although designed to be used with the optional keyboard, in my opinion, this is a must to get the most from the Tab P12 Pro. It provides you with the kind of functionality that Android 12L will bring but until that arrives, it’s a solid effort on Lenovo’s part to try and flesh out the tablet experience which in its Android 11 guise is fairly inhibiting if you want to do anything other than watch videos and browse the web.

Most of these complaints are leveled at Android the OS rather than Lenovo directly. This will hopefully change over time, but it feels like the Tab P12 is handicapped as it’s still running what amounts to a big version of the Android OS found on your smartphone.

Google Entertainment Space is an excellent inclusion and was predominantly where I spent most of my time when using the Lenovo Tab P12 Pro. It’s a great hub for all of your entertainment that is the perfect fusion of Google TV for a tablet form. Given that most people want a tablet as a second screen, having an all-access section dedicated to streaming services, gaming, and more is a super way to keep track of everything you’re consuming.

The internals feel practically like overkill for the sole purpose of watching movies and TV shows, but this is great if you want to do a little more. This tablet has a little headroom to play some of the biggest and best mobile games on this screen too – and most run very, very well. 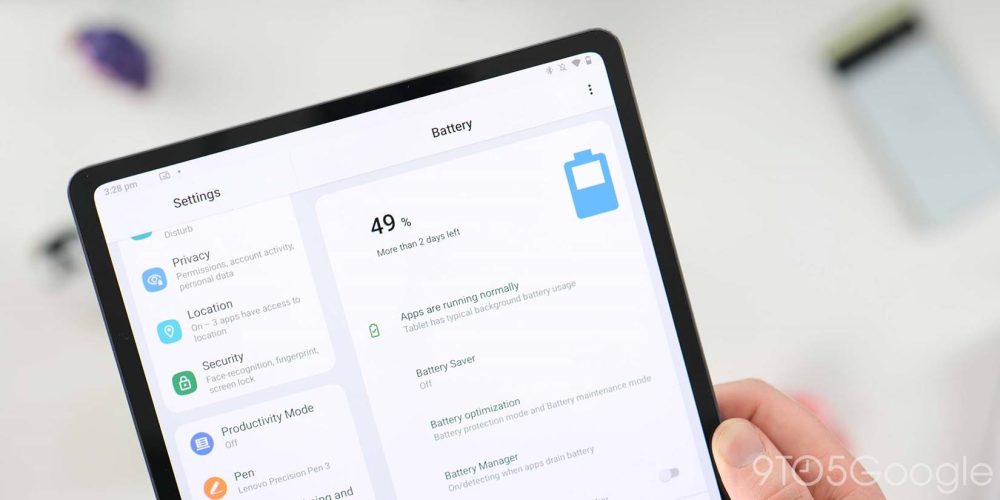 There is a huge 10,600mAh battery tucked into this almost credit card-thin slab of tech and with the right usage, I could easily go four to five days without needing to think about charging. Of course, that meant light usage with the odd YouTube video or Netflix show alongside some web browsing.

You can kill this thing in a day or two though if you are using it as a “main” device. I found that it was supplementary to my other tech and PC, which means it was excellent for content consumption rather than being the sole entertainment and productivity hub.

I charged using the in-the-box 30W power brick and it would be topped up in under three hours. In all honesty, I would leave it and go about my day until it was full or close to full. That was fine for me given the size of the internal cell and the fact that I continued to use the Lenovo Tab P12 Pro as a supplementary device during my extended review period.

Lenovo has crafted a fine tablet form, but one that is let down by the software running on the Tab P12 Pro. From the design to the performance, this tablet deserves more. Some of that is down to Google’s lack of support for the tablet form factor in recent years, while some of that is down to Lenovo’s lack of effort to push the most tablet-friendly Android build in recent years promptly.

There’s no doubt that if the software can be tamed, the $700 asking price becomes less of a stumbling block. However, having spent a long time with the Lenovo Tab P12 Pro for review, it’s impossible to suggest that anyone go out and pick up this device over a slightly cheaper previous-generation Galaxy Tab – at least for now.

You can pick up Lenovo Tab P12 Pro from several online retailers including direct from Lenovo with discounts taking this device to a more palatable $499. Alternatively, you can grab the Tab P12 Pro from Amazon, Best Buy, and more.