source link: https://www.businessinsider.com/mo-brooks-fox-news-2020-election-fraud-exchange-2022-5
Go to the source link to view the article. You can view the picture content, updated content and better typesetting reading experience. If the link is broken, please click the button below to view the snapshot at that time. 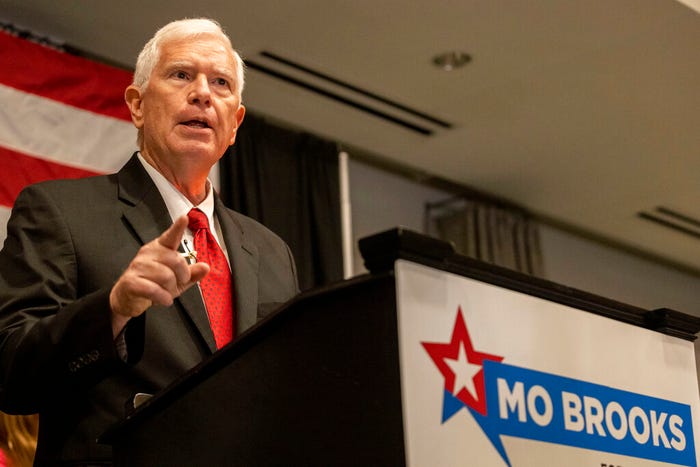 Sign up for our weekday newsletter, packed with original analysis, news, and trends — delivered right to your inbox.
Email address
By clicking ‘Sign up’, you agree to receive marketing emails from Insider as well as other partner offers and accept our Terms of Service and Privacy Policy.

Rep. Mo Brooks on Sunday engaged in a heated argument with a "Fox News Sunday" host over the 2020 presidential election results, which the conservative lawmaker insists was tainted with irregularities.

During a segment with guest host Sandra Smith, Brooks — who last week earned enough votes to secure a place in the Alabama Republican Senate runoff election next month — insisted that voter fraud couldn't be ruled out for the 2020 election, despite offering no proof to back up his assertions.

When Brooks spoke of the importance of voter integrity in pushing for tougher election laws, Smith said legal efforts after the 2020 election were unable to prove any election malfeasance.

Brooks, however, did not take kindly to the anchor's statement and said his election concerns — along with the dozens of lawmakers who sought to challenge the results in several swing states — were being dismissed.

"The congressmen and senators disagree with you, with what you just said," the congressman told Smith. "Elections are going to be stolen if we don't fix these problems."

He added: "The courts are not the final arbiter of who wins federal election contests."

After mentioning additional debunked claims of voter fraud, Smith stepped in and said that they could not be proven.

"That has been looked at and fact-checked by multiple outlets, including Reuters, who have [reported] there isn't any proof that there was widespread voter fraud," she responded.

Brooks — who was endorsed by former President Donald Trump for the Senate race last year before the former president withdrew his support in March and accused his longtime ally of going "woke" — surged in polling shortly before last month's runoff by continuing to appeal to the state's conservative electorate.

He will face former Senate chief of staff and attorney Katie Britt in the runoff next month.