source link: https://techxplore.com/news/2022-05-bezos-biden-squabble-corporate-taxes-inflation.html
Go to the source link to view the article. You can view the picture content, updated content and better typesetting reading experience. If the link is broken, please click the button below to view the snapshot at that time. 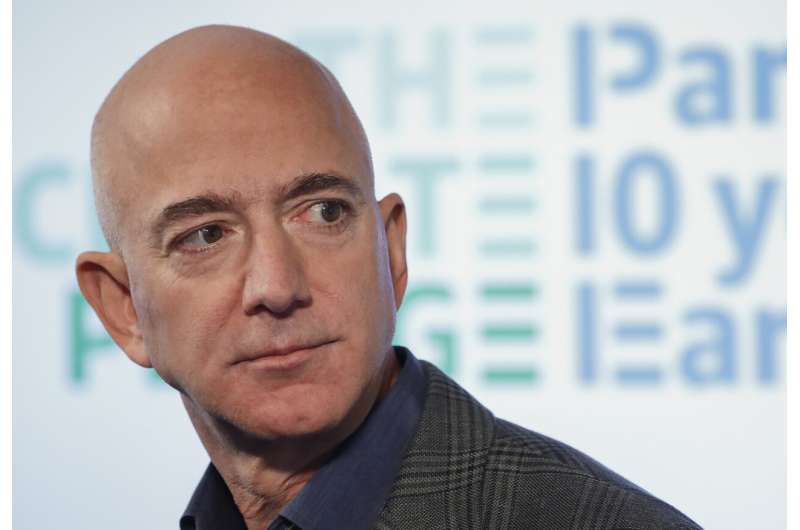 Amazon CEO Jeff Bezos speaks during his news conference at the National Press Club in Washington, Sept. 19, 2019. Bezos became the latest centibillionaire to launch a political fight on Twitter by denouncing a tweet by President Joe Biden about corporate taxes as “disinformation” and “misdirection.” The White House quickly retorted Monday, May 16, 2022, that Bezos “opposes an economic agenda for the middle class.” Credit: AP Photo/Pablo Martinez Monsivais, File

Jeff Bezos this weekend became the latest centibillionaire to launch a political fight on Twitter by denouncing a tweet from President Joe Biden about corporate taxes as "disinformation" and "misdirection."

The White House quickly retorted Monday that Bezos "opposes an economic agenda for the middle class." And then Bezos fired back, arguing that the Biden administration would have made inflation worse if its $3.5 trillion economic and social spending bill, known as "Build Back Better," had made it into law.

"They failed, but if they had succeeded, inflation would be even higher than it is today, and inflation today is at a 40 year high," Bezos tweeted.

The dispute marks an unusually high-profile one for Bezos, who has generally sought to avoid political fights in public. Bezos is the second-wealthiest person in the world, with a net worth of $150 billion, behind Elon Musk, whose wealth has reached $268 billion. Musk, the Tesla founder who is seeking to purchase Twitter, has frequently used the social media platform to attack his perceived critics and to pick fights about free speech.

The spat began on Friday, when Biden's account tweeted: "You want to bring down inflation? Let's make sure the wealthiest corporations pay their fair share."

Biden has often accused Amazon, the ecommerce giant that Bezos founded and led for nearly a quarter-century, of failing to pay its fair share in taxes. In 2017 and 2018, Amazon paid no income tax despite earning billions in profits. Since then, the company has made modest tax payments.

"Raising corp taxes is fine to discuss," Bezos tweeted in response. "Taming inflation is critical to discuss. Mushing them together is just misdirection."

On the actual policy question—whether raising corporate income taxes would in fact restrain inflation—most economists give Biden the edge, with a caveat.

Larry Summers, a Harvard economist who served as Treasury secretary during the Clinton administration, tweeted, "I think Jeff Bezos is mostly wrong in his recent attack" on the Biden administration.

"It is perfectly reasonable to believe, as I do," Summers added, "that we should raise taxes to reduce demand to contain inflation and that the increases should be as progressive as possible."

Still, Strain and other economists caution that it would take many months for any rate increase to have much impact, and even then, would not reduce inflation by much.

"Of all the things I would do to rein in inflation, the corporate income tax is a long way down the list," added Carl Tannenbaum, chief economist at Northern Trust, an asset management firm in Chicago.

Alan Auerbach, an economist and tax expert at the University of California, Berkeley, suggested that Bezos has a point when it comes to the longer-run impact of higher corporate taxes.

A higher corporate income tax would leave companies with less money to invest in extra capacity, Auerbach said. Over time, this financial burden would increase their production costs.

"In the long run, it would be true that you'd expect prices to be higher as a result of a higher corporate tax," Auerbach said.

Neither the White House nor Bezos mentioned one curious backdrop to their dispute: A year ago, Bezos endorsed a Biden proposal to raise the corporate income tax rate to pay for more infrastructure investment.

"We recognize this investment will require concessions from all sides—both on the specifics of what's included as well as how it gets paid for (we're supportive of a rise in the corporate tax rate)," Bezos wrote on Amazon's website in April 2021.

Amazon conciliatory as US eyes regulation