source link: https://arstechnica.com/science/2022/05/actually-boeing-is-probably-the-savior-of-nasas-commercial-crew-program/
Go to the source link to view the article. You can view the picture content, updated content and better typesetting reading experience. If the link is broken, please click the button below to view the snapshot at that time.

"I think if they look back on it, they wouldn't do it again." 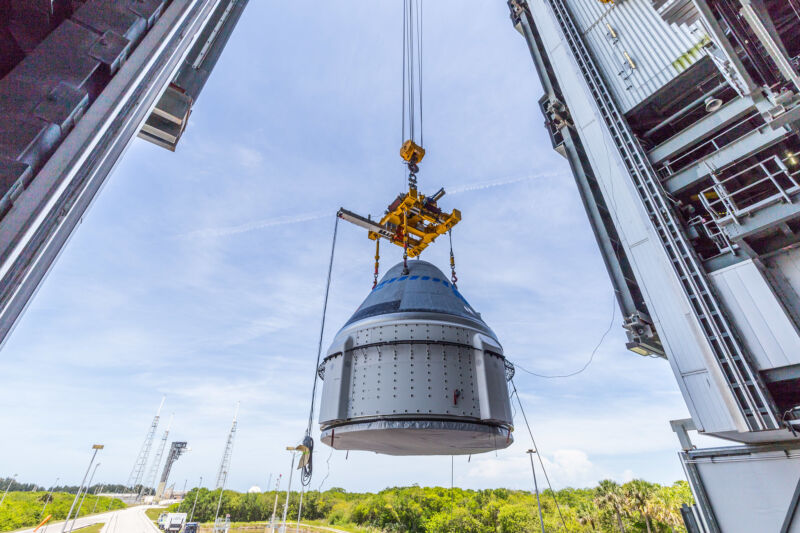 The last few years have been pretty rough for the Boeing Company. Its newest generation of 737 aircraft, the Max, was grounded in 2019 after two fatal crashes. And following a series of poor management decisions, the company has continued to lose commercial aircraft market share to European multinational corporation Airbus.

Boeing's defense segment has fared little better. After winning a large military refueling contract, Boeing started producing the KC-46 tanker for the Air Force. But because of manufacturing and design problems with the tanker, the company has taken about $5 billion in losses during the last decade.

Finally, there is Boeing's space unit, which has struggled to adapt to the new era of commercial space and fixed-price contracts. Most visibly, Boeing has competed directly with SpaceX over the last decade in the commercial crew program to deliver NASA astronauts to the International Space Station. So far, things have not gone terribly well. Boeing is running about three years behind SpaceX, which has now launched five crewed missions for NASA.

By contrast, Boeing has faced technical setbacks with the flight software and valves in the Starliner spacecraft's propulsion system. On Thursday, the company will attempt to launch a do-over mission—a second uncrewed test flight of Starliner intended to dock the spacecraft with the International Space Station. Because of the need to re-fly this test mission after the first one failed in 2019, Boeing has taken more than half a billion dollars in losses.

It now seems possible, if not probable, that Boeing has lost money on the commercial crew program, for which NASA has paid it $5.1 billion since 2010. One sign that Boeing may be seeking to cut costs emerged last week during a meeting of the Aerospace Safety Advisory Panel, when member David West raised concerns that Boeing was not putting enough resources toward Starliner's development and test campaign.

"The panel has noted that Boeing staffing levels seem to be especially low," West said. "The panel will be monitoring the situation in the near future to see what impact, if any, this could have on the existence or mitigation of any safety risks. Boeing should ensure that all available resources are applied to meet a reasonable schedule and avoid unnecessary delays."

It would be easy to dismiss Boeing as a legacy aerospace company that can't keep up with newer, more nimble competitors such as SpaceX. But in reality, Boeing's efforts to compete have played an important role in the rise of SpaceX.

More than a decade ago, at the outset of the commercial crew program, NASA asked Congress for $500 million as part of its fiscal-year 2011 budget. Recently, two senior NASA officials said the program would never have gotten off the ground had Boeing not entered the competition alongside SpaceX and other smaller companies.

"I don't think that we would be anywhere with commercial crew had it not been for Boeing coming into the fray," said Charlie Bolden, who served as NASA administrator from 2009 to 2017, during an Aviation Week webinar. "Nobody likes SpaceX, to be quite honest, on the Hill. They were an unknown quantity. I think if Boeing had chosen to stay out of commercial crew, we probably would have never gotten funding for it."

However, Bolden said, as soon as Boeing entered the competition, congressional attitudes started to change. And he credits Boeing for taking a chance on a fixed-price contract, which was relatively new for NASA at the time. The contracting method meant that, instead of getting reimbursed for all of its expenses plus a fee, Boeing could lose money if there were technical delays or setbacks.

"Boeing was a dream," Bolden said. "I call them a champion in being willing to accept the risk for a program whose business case didn't close back then. And I'll be blunt. I don't know whether the business case closes today."

Bolden's thoughts were echoed by the space agency's deputy administrator at the time, Lori Garver. Speaking last week at the Ars Frontier conference in Washington, DC, Garver said Congress was "furious" when the Obama administration sought funding for commercial crew back in 2010.

"Boeing entering the commercial crew program meant that you got a lot more support from Congress because they tend to have a very robust lobbying program," Garver said. "I was very happy when the traditional, big aerospace company Boeing bid. Because I think that was a tough call. And I think if they look back on it, they wouldn't do it again."