What’s down the road for silicon?

source link: https://www.nytimes.com/2022/05/16/science/electronics-silicon-gallium.html
Go to the source link to view the article. You can view the picture content, updated content and better typesetting reading experience. If the link is broken, please click the button below to view the snapshot at that time.

What’s Down the Road for Silicon? 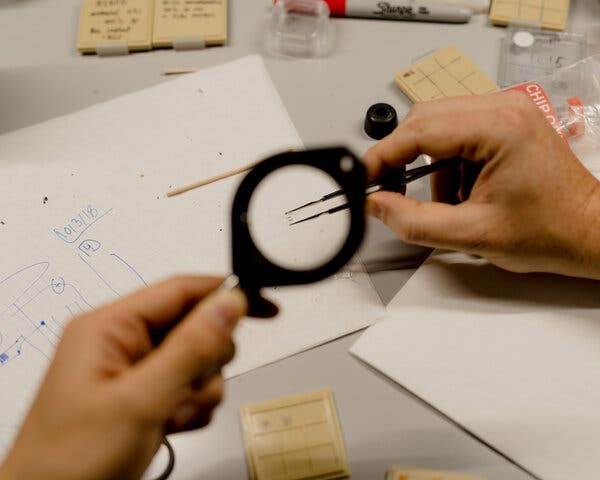 A chip of silicon carbide at a lab at the University of Chicago. Despite having a higher cost than silicon, the material is valuable for power electronics.Credit...Lyndon French for The New York Times

The story of modern electronics is often equated with the relentless advancement of the silicon-based microchips that process information in our computers, phones and, increasingly, everything else. Moore’s law has become a well-known summary of how those chips become ever more compact and powerful.

But electronics also have a critical, less celebrated role in modern life: directing the electricity that powers all of our gadgets. This field, aptly called “power electronics,” is changing quickly as engineers switch to power-control devices based not on silicon chips but on new materials that handle electricity more quickly and efficiently. Some novel, post-silicon devices are in use already, and better power electronics will become far more important in the future as much of our economy switches from fossil fuels to electricity. At a time when supply chains for silicon are severely kinked, these newer materials have boomed.

This wave of new materials burst from the lab in 2017, when Tesla faced a pivotal moment in its history. The company had released two successful luxury car models, but in its effort to become a major automaker, it gambled the company’s future on making a cheaper, mass-market vehicle.

When Tesla released its Model 3, it had a secret technical edge over the competition: a material called silicon carbide. One of the key parts of an electric car is the traction inverters, which take electricity from the batteries, convert it into a different form and feed it to the motors that turn the wheels. To get the pin-you-to-your-seat acceleration that Teslas are known for, traction inverters must pump out hundreds of kilowatts, enough power to supply a small neighborhood, while being dependable enough to handle life-or-death highway use.

While previous traction inverters had been based on silicon, the Model 3’s were made from silicon carbide, or SiC, a compound that contains both silicon and carbon. STMicroelectronics, the European company that produced the silicon carbide chips Tesla used, claimed that they could increase a vehicle’s mileage range up to 10 percent while saving significant space and weight, valuable benefits in automotive design. “The Model 3 has an air-resistance factor as low as a sports car’s,” Masayoshi Yamamoto, a Nagoya University engineer who does tear-downs of electric-vehicle components, told Nikkei Asia. “Scaling down inverters enabled its streamlined design.”

The Model 3 was a hit, thanks in part to its groundbreaking power electronics, and demonstrated that electric cars could work on a large scale. (It also made Tesla one of the most valuable companies in the world.)

“Tesla made this fantastic move,” said Claire Troadec, an analyst at Yole Développement, a high-tech research and consulting firm in France, referring to the company’s switch to silicon carbide. “What they did in a year and a half was really amazing.” 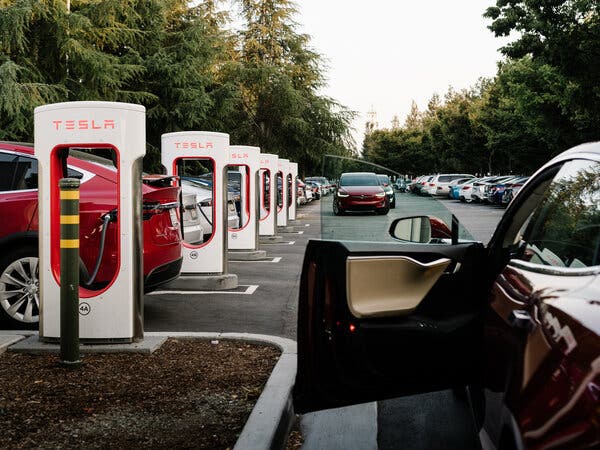 With Tesla’s fast rise, other automakers have moved aggressively to electrify their fleets, pushed on, in many places, by government mandates. Many of them are also planning to use silicon carbide not only in traction inverters but in other electrical components like DC/DC converters, which power components such as air conditioning, and on-board chargers that replenish the batteries when a car is plugged in at home. Silicon carbide costs much more than silicon, but many manufacturers are concluding that the benefits more than make up for the higher price.

Last month, Wolfspeed, a semiconductor manufacturer, opened a $1 billion silicon carbide “fab,” or fabrication plant, in upstate New York. The company, based in North Carolina, has deals to supply the material to General Motors, among other buyers. Customers of electronic vehicles “are looking for greater range,” said Shilpan Amin, a G.M. vice president. “We see silicon carbide as an essential material in the design of our power electronics.”

A Critical Year for Electric Vehicles

As the overall auto market stagnates, the popularity of battery-powered cars is soaring worldwide.

New York Gov. Kathy Hochul talked up the Wolfspeed plant at its opening ceremony. “There’s a little place far away called Silicon Valley. You ever hear of that? Yeah, it’s kind of overrated,” she said. “I want to be the first to welcome you to Silicon Carbide Valley, because this is the future.”

Local boosterism aside, silicon will continue to dominate the half-trillion-dollar semiconductor industry, including the essential processor and memory-chip markets, for the foreseeable future. But in the niche of power electronics, which has sales of around $20 billion per year, silicon carbide is making significant inroads. Yole Développement projects that the automotive market for silicon carbide will increase to $5 billion in 2027 from its current total of a little over $1 billion.

“We wouldn’t have had such a boom of electric vehicles without silicon carbide,” said STMicroeletronics executive Edoardo Merli. 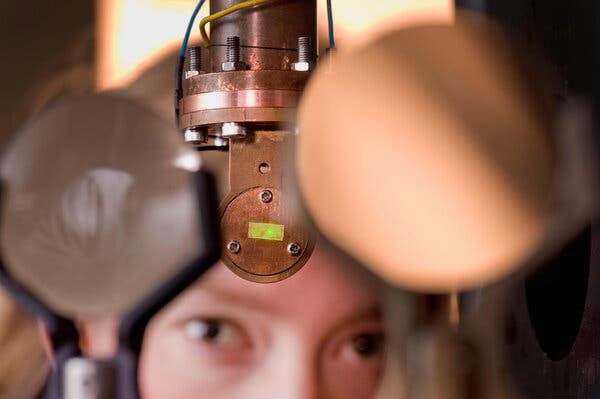 A fragment of an industrial sapphire wafer coated with gallium nitride was studied at the Photon Science Institute at the University of Manchester in Britain.Credit...James King-Holmes/Alamy

Silicon and silicon carbide are useful in electronics because they are semiconductors: They can switch between being electrical conductors, as metals are, and insulators, as most plastics are. This ability makes semiconductors the key materials in transistors — the fundamental building blocks of modern electronics.

Silicon carbide differs from silicon in that it has a wide bandgap, meaning that it requires more energy to switch between the two states. Wide bandgap, or WBG, semiconductors are advantageous in power electronics because they can move more power more efficiently.

Silicon carbide is the senior citizen of WBGs, having been under development as a transistor material for decades. In that time, engineers have started using younger upstart WBG materials, like gallium nitride, or GaN. In the 1980s, researchers used gallium nitride to create the world’s first bright blue LEDs. Blue light comprises high-energy photons; gallium nitride, with its wide bandgap, was the first semiconductor that could practically produce photons with the sufficient energy. In 2014, three scientists were awarded the Nobel Prize in Physics for that innovation, which became ubiquitous in devices like TV screens and light bulbs.

Lately, researchers have started using gallium nitride to improve power electronics. The material reached commercial fruition over the past few years in adapters for charging phones and computers. These adapters are smaller, lighter, faster-charging and more efficient than traditional ones that use silicon transistors.

“A typical charger that you buy for your computer is 90 percent efficient,” said Jim Witham, chief executive of GaN Systems, a Canadian company that supplied the transistors in Apple’s gallium-nitride laptop chargers, which were released last fall. “Gallium nitride is 98 percent efficient. You can cut power losses by four times.”

Yole Développement estimates that the gallium-nitride market will grow to $2 billion in 2027 from its total of about $200 million this year.

Wide-bandgap materials are making their way into other applications as well. Data centers, large facilities filled with computer servers that run the online services we all depend on, are notorious users of electricity. Compuware, a supplier of high-end power supplies to data centers, says its gallium-nitride-based power supplies reduce wasted electricity by about 25 percent and take up 20 percent less space than conventional devices, allowing customers to run more servers in the same racks. The company also says that its gallium-nitride power supplies are being used in data centers run by major companies around the world.

Engineers are also working on using WBG materials to better take advantage of renewable energy sources. Solar cells and wind turbines rely on inverters to feed electricity into a home or into the grid, and many companies expect gallium nitride to do that job better than silicon. Enphase, a supplier of inverters for solar-powered installments, is currently testing gallium-nitride-based inverters to make sure they can hold up to harsh rooftop weather conditions for decades. In one test, Enphase submerges inverters underwater inside a pressure cooker, puts the pressure cooker inside a sealed chamber and oscillates the temperature between 185 degrees and minus 40 degrees Fahrenheit over the course of 21 days. If gallium-nitride devices survive the challenges, Enphase’s co-founder Raghu Belur plans to make a fast shift to the new material. “It’s absolutely headed in that direction,” he said.

In an investors’ meeting last year, a senior Enphase engineer gave a more conclusive prediction, saying, “It’s the end of the road for silicon.”

Companies that produce WBG components have largely dodged the chip crunch that’s jamming tight silicon supply chains. Before the pandemic upended global trade, silicon carbide and gallium nitride were ramping up fast, and companies interested in the materials signed supply deals with producers, which moved along smoothly. The crisis has actually helped some makers of WBG semiconductors: Chip-buyers frustrated with the current silicon crisis have signed long-term agreements to avoid similar problems with other materials in the future.

The cycle of life cycles 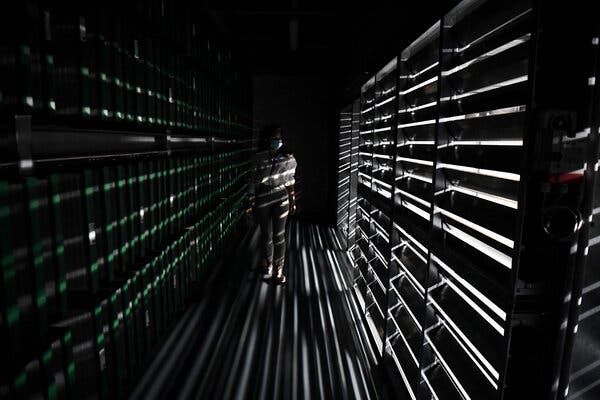 A data center in Saint-Ouen-l’Aumone, France. Wide-bandgap materials may help reduce the size and electricity use of these notoriously energy-intensive hubs.Credit...Alain Jocard/Agence France-Presse — Getty Images

Even as companies upgrade to silicon carbide and gallium nitride, researchers are developing new WBG materials that could further improve power electronics. In 2012, Masataka Higashiwaki, a researcher at Japan’s National Institute of Information and Communications Technology, announced a promising transistor made from gallium oxide, a material with a bandgap significantly higher than those of silicon carbide and gallium nitride. Components made from gallium oxide “can provide much lower loss” than those made from silicon, silicon carbide and gallium nitride “resulting in higher efficiency,” Dr. Higashiwaki said. Scientists have made quick progress in developing the material. Dr. Higashiwaki expects that, over the next decade, it will start showing up in products like improved traction inverters in electric cars.

But innovation being what it is, there’s already something even better sparkling on the horizon. “Diamond is the ultimate ultrawide-bandgap material,” said Ms. Troadec, though it will be quite a while before anyone manages to turn that exceptionally precious gemstone into an exceptionally precious semiconductor.