source link: https://markets.businessinsider.com/news/stocks/stock-markets-today-us-futures-edge-higher-with-investors-wary-2022-5
Go to the source link to view the article. You can view the picture content, updated content and better typesetting reading experience. If the link is broken, please click the button below to view the snapshot at that time. 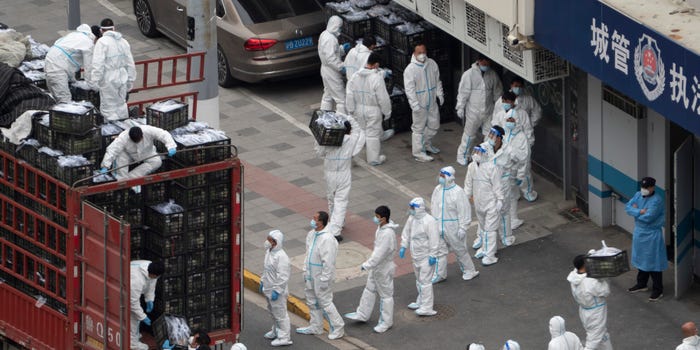 People in PPE load groceries off a truck before distributing them to locals under the Covid-19 lockdown in Shanghai, China Tuesday, April 05, 2022. Wang Gang/Future Publishing via Getty Images

Global stocks seesawed on Monday, after reports showing the dramatic impact on China's economy from its zero-COVID policy added to existing concerns about rising inflation ahead of a data-packed week.

US stock futures fell, indicating there may be some profit taking at the start of trade later, after the benchmark indices staged a strong rebound on Friday. S&P 500 futures dropped 0.3%, while those on the Dow Jones lost 0.1%, and those on the Nasdaq 100 were down by 0.5%.

Chinese government figures on Monday showed retail sales slid by 11% in April, their largest drop in two years, as consumers under strict COVID-19 lockdowns were unable to hit the stores. A separate report showed an unexpectedly large decline in industrial output, which fell 2.9% last month, compared with estimates for growth of 0.4%.

"These numbers are unlikely to improve significantly in the coming months, given that China is unlikely to alter its zero-COVID policy, given the vulnerability of its health service to too many infections, which means that after a poor Q1, Q2 could well be even worse," CMC Markets chief strategist Michael Hewson said.

"The poor nature of these numbers, along with the probability of how much improvement can be expected given China's zero-COVID policy, [mean] Asia markets have seen a mixed start to the week, which looks set to translate into a lower open for markets here in Europe," he said.

This week sees a slew of data from several major economies. On the docket are UK employment and retail sales figures, US consumer spending, eurozone inflation and a GDP reading from Japan, where the yen has hit 20-year lows against the dollar.

Oil prices slid, paring some of Friday's solid gains, as concern mounted about the state of the Chinese economy, and about the risks to global growth from surging commodity prices. Brent crude was last down 1.4% at $110.53 a barrel, while WTI crude futures fell 1.1% to around $107.44 a barrel.

Last week, the Organization of the Petroleum Exporting Countries cut its demand forecast for 2022. Meanwhile, the International Energy Agency revised its expectations of a market shock from a drop in Russian output, in part because of a decline in consumption.

"Crude oil trades lower after dismal economic data out of China highlighted the price the country is paying for the government's COVID-zero policy, with industrial output and consumer spending falling to the worst levels since the pandemic began in 2020," strategists at Saxo Bank said.

"Brent crude oil remains range-bound within a $100 to $114 range, with tight supply and sanctions against Russia being offset by global growth worries, led by China, where crude oil processing last month slumped to the lowest level in two years," they added.

Cryptocurrencies regained some stability Monday after last week's meltdown, which featured stablecoin TerraUSD at its core. Bitcoin traded 0.2% higher at $29,716, narrowly above last week's 17-month lows, while ether eased 0.3% to around $2,022, according to data from CoinMarketCap. Altcoins solana and cardano both rose by around 5%.

Read more: We interviewed the CEOs of 4 of Warren Buffett's most iconic businesses. Here are their 16 best quotes about the investor, Berkshire Hathaway's ownership, and navigating the pandemic and inflation.