source link: https://www.techradar.com/news/chrome-os-getting-apples-best-video-editor-and-more-later-this-year
Go to the source link to view the article. You can view the picture content, updated content and better typesetting reading experience. If the link is broken, please click the button below to view the snapshot at that time. 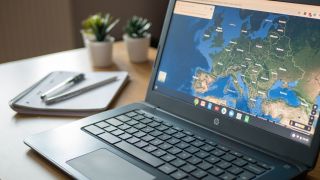 With all the excitement around the Google IO 2022 keynote, you'd be forgiven if you missed IO's second-day events, which included a “What’s new in Chrome OS” keynote where it showed off the system’s upcoming features.

Under the theme of “Better Together”, many of the upcoming features are centered on bettering interconnectivity between apps, devices, and Chrome OS. Be aware that none of what was shown has a set launch day. All that was said is they will either be releasing “soon” or “later this year.”

Going down the list, the first change is the inclusion of Fast Pair which will allow you to connect compatible earbuds and headphones to Chrome OS with one tap. Your earbuds will appear on your Google account where you can access their settings or check the battery life.

Chromebook users will have the ability to stream communication apps from their Android phones to their computers. A new window on Chrome OS will appear where you can access the app’s chat feature. However, the phone must be running Android 13 or higher to use this feature. The platform update is expected to launch around October 2022.

The Chrome OS launcher will also less be intrusive as it will no longer take up the entirety of the screen and its Search functionality will have new sorting options to make finding apps less of a chore.

And the last major feature is the introduction of an app discoverer. The service uses machine learning to learn your preferences and user behavior in order to begin recommending apps. On top of that, it’ll teach you how to properly install the app even if the instructions are not on the Play Store.

Near the end of the keynote, Google revealed that the critically acclaimed video editing app LumaFusion will be making its way to Chrome OS.

LumaFusion is TechRadar’s favorite editing app and even won the iPad App of the Year reward for 2021. The reason LumaFusion is so beloved is that it takes normally complex features and reworks them to be more accessible.

LumaFusion lets users process multiple 4K media files with access to multiple effects, color correction tools, and audio mixing features. As a plus, it’s a one-time payment instead of a subscription plan like the one Adobe requires for its suite of Creative Cloud apps that includes Adobe Premiere Pro.

Like the rest, LumaFusion on Chrome OS has no launch date, but we can’t wait to fall in love with the app on yet another platform.