source link: https://techxplore.com/news/2022-05-simulating-realistic-lane-two-lane-traffic.html
Go to the source link to view the article. You can view the picture content, updated content and better typesetting reading experience. If the link is broken, please click the button below to view the snapshot at that time. 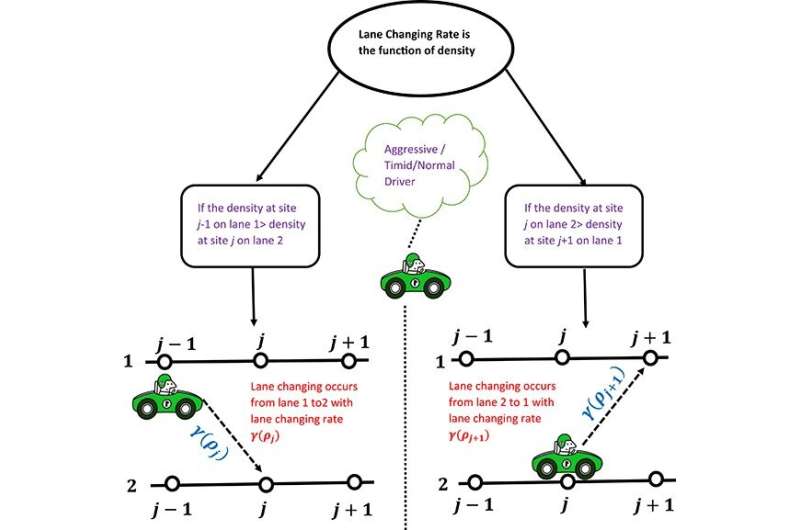 Many urban areas worldwide are now rapidly expanding, often with major negative impacts on traffic congestion. To address this issue, researchers have constructed models aiming to simulate the flow of traffic—but so far, they haven't widely considered the impacts of drivers changing lanes. In a new study published in The European Physical Journal B, Nikita Madaan and Sapna Sharma at the Thapar Institute of Engineering and Technology, India, show how the lane-changing behaviors observed in real drivers can be incorporated into simulations of two-lane roads.

The duo's results could provide valuable guidance for urban planners as they aim to minimize traffic congestion within fast-expanding cities. In the past, the models used to study flows of traffic could be divided into two broad categories: while "discrete" models treated each vehicle individually, "continuous" approaches didn't distinguish between vehicles, and instead considered their average density. In this second case, traffic flow is comparable to the motion of a fluid.

More recently, a hybrid between these approaches has emerged, which models traffic a flowing lattice of discrete vehicles. These models are notably easy to simulate and analyze, and today, they have been extended to consider factors including weather conditions, accidents, and road quality. But so far, models of two-lane traffic have generally assumed that drivers change lanes at a constant rate: a behavior which isn't observed in real traffic.

For the first time, Madaan and Sharma have applied the lattice model to simulating more accurate lane-changing behaviors on a two-lane road. Their approach acknowledges that drivers tend to change lanes more frequently as traffic density increases; while above a certain density, this rate begins to decrease. It also shows that when drivers are more timid than aggressive, traveling waves in traffic density will tend to increase in length, and exhibit higher variations in density—decreasing the stability of traffic flow. In their future research, the duo hope to incorporate more lanes into their simulations, and even consider the behaviors of self-driving vehicles.